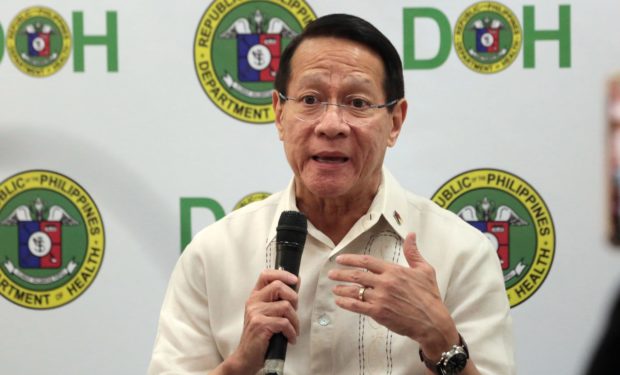 MANILA, Philippines — Health Secretary Francisco Duque III has assured that the rollout of the universal health care (UHC) program was “right on schedule” and that piloting it in 33 areas was the “most reasonable and cost-effective approach.”

Duque made the assurance to dispel concerns by some lawmakers of a delay in the full implementation of the UHC given that the Department of Health (DOH) only selected key areas where local health service provider networks would be developed.

The health chief pointed out that their identification of UHC integration sites (UIS) was “not the be-all and end-all” of the Duterte administration’s flagship health program.

“Though it is a critical step to address fragmentation in the health system, the UIS is only one of the many reforms. Let us not confuse or equate UIS with UHC. Nonselection of an area in the UIS for 2020 does not mean that UHC will not be implemented at all in a certain area next year,” Duque said in a statement.

During the DOH’s budget hearing last week, Duque drew flak from lawmakers for saying that there won’t be a national rollout of the UHC due to budgetary and logistical concerns.

If this were the case, Albay Rep. Joey Salceda said the UHC law should instead be called the “partial health care law.”

Duque assured though that even if there were only 33 pilot sites, these were selected in such a way that “every geographical area is well-represented.”

The DOH has identified 13 sites in Luzon, 10 in Mindanao, eight in Visayas and two in the National Capital Region.

“[This] represents a fair and equitable distribution of DOH resources for this program. This is the most reasonable and cost-effective approach to ensure that local health care provider networks will offer quality services efficiently and transparently,” Duque said.

Ricardo Morales, president of the Philippine Health Insurance Corp., noted that implementing a gradual rollout of the UHC was not unique to the Philippines as this was also the route taken by other countries which launched a similar program, like the United Kingdom.

“It was not a grand opening. They grew it over several years until they reached 100 percent [coverage]. That’s also the case with us. We will start with 33 sites until we are able to cover the entire ecosystem,” Morales told reporters.

He added that everyone must understand that a full rollout could not be had because of such issues with funding as well as absorptive capacity.

Morales said they would still need to hire more personnel and set up more local health insurance offices to serve the public.

“For full implementation, candidly, [it may take] three years. UHC is a very ambitious law, and it’s challenging,” Morales said.

Duque reminded lawmakers that under the UHC law, they are given a six-year transition period to integrate local provider networks to the provincial and city health systems.