MANILA, Philippines – Justice Secretary Menardo Guevarra sees the public outcry over the possible release of rape and murder convict and former Calauan, Laguna Mayor Antonio Sanchez as a blessing in disguise since it prompted a review of the good conduct time allowance (GCTA) law.

Speaking at Monday’s Senate hearing into the implementation of a law on granting GCTA, Guevarra said that the Sanchez case provided the government an opportunity to review the said law. 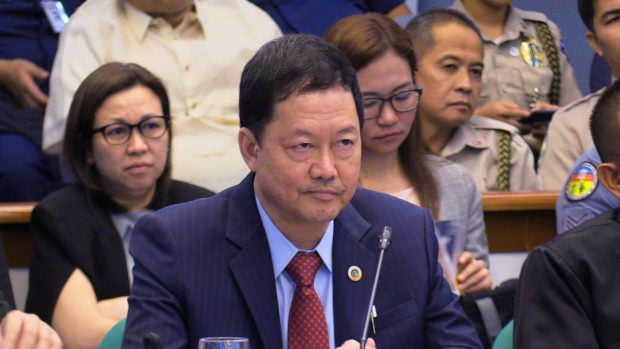 “On granting of GCTAs regardless of the crimes committed, now we have an opportunity to review the provisions of this law enacted in 2013 because of the public outcry and we thank that this incident happened, because it proved to be a blessing in disguise,” he said.

“We at the Department of Justice reviewed the law even more carefully and tried to harmonize the various provisions that seemed to be not consistent with each other,” he added.

He said that Section 1 of Republic Act 10592 or the GCTA law pertains to the grant of time credit for preventive imprisonment.

Convicts under preventive imprisonment are those who are detained while their charges are pending in court, Guevarra explained.

“In that same provision on preventive imprisonment, there was a line inserted that says that habitual delinquents, escapees, recidivists and those charged with heinous crimes are not covered by the provisions of this act,” he said.

“So there is one sweeping statement found in a section that pertains solely to preventive imprisonment, had it been a sole provision by itself, one entire section stand alone that says habitual delinquents, recidivists, escapees and persons convicted of heinous crimes are not covered by the benefits of this act then probably there would be no confusion,” he said.

The Senate Justice and Human Rights committee is conducting a hearing on the implementation of the GCTA law which would allow thousands of inmates, to be released due to good conduct. / gsg

Lucky Duque: DOH chief gets no rebuke from Duterte

Palace: ‘Good idea’ to use ABS-CBN frequencies for distance learning