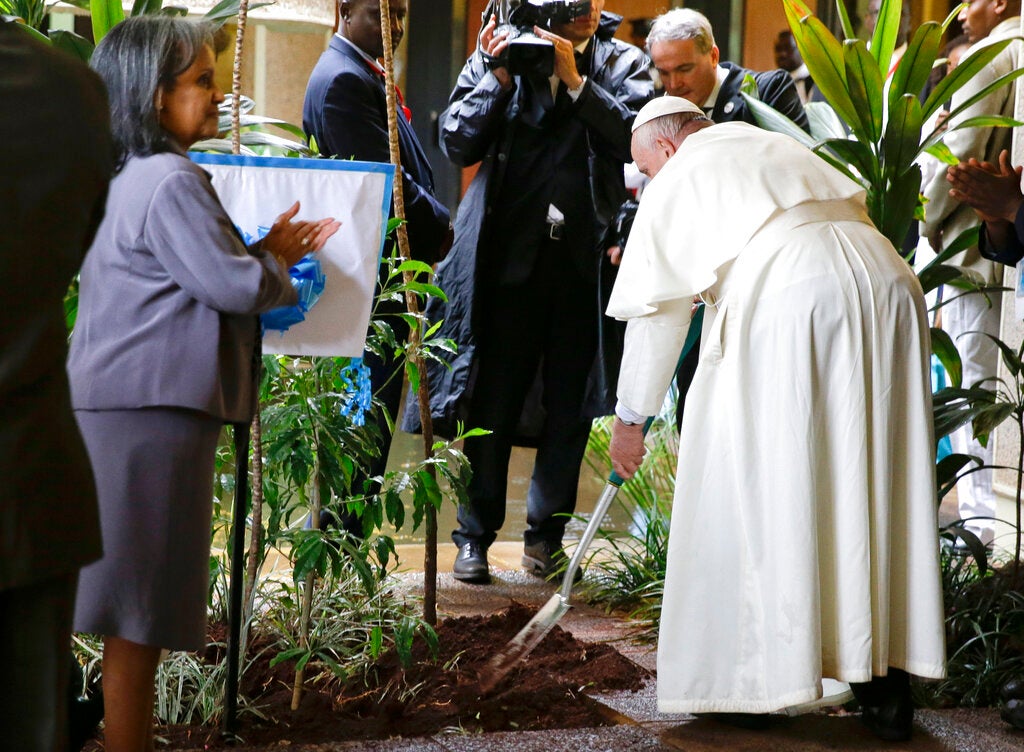 In this Nov. 26, 2015 file photo Pope Francis plants a tree during a visit to the United Nations regional office, in Nairobi, Kenya. Pope Francis issued an appeal in a message Sunday, urging governments to show the “political will” to take drastic steps to deal with climate change and says it’s time to abandon dependence on fossil fuels. (AP)

VATICAN CITY — Pope Francis is challenging governments to show the “political will” to take drastic steps to deal with climate change during an upcoming U.N. summit while encouraging people to abandon dependence on fossil fuels.

Francis issued the fervent appeal in a message Sunday to mark the start of several weeks of prayer by Christians to raise political awareness about pollution and exploitation of natural resources. The period of prayer and reflection runs until Oct. 4, the feast day of Francis of Assisi, his namesake saint who embraced a back-to-basics lifestyle and praised nature and animals.

He began his appeal by quoting from the Bible about Creation: “And God saw that it was good.”

Tragically, mused Francis, “something good in God’s eyes has become something to be exploited in human hands.”

He denounced a litany of how humans have harmed the environment including pollution and reliance on fossil fuels as well as the impact global warming is having.

“The increase in the intensity and frequency of extreme weather phenomena and the desertification of the soil are causing immense hardship for the most vulnerable among us,” Francis said.

He also cited melting glaciers, neglect of water basins and plastics and microplastics as “equally troubling.”

He advised reviewing if daily decisions about food, transportation, use of water and other material goods are “thoughtless and harmful.”

Francis echoed pressing calls by young people for “courageous decisions,” adding that “we owe them real answers, not empty words, actions not illusions.”

The pontiff said that at the U.N Climate Action Summit later this month, “governments will have the responsibility of showing the political will to take drastic measures” to achieve as quickly as possible net-zero greenhouse gas emissions and to limit average the average increase in global temperature in line with the Paris climate accords.

He pointed no fingers at any one nation or region.

But he noted that next month, the Vatican is promoting a gathering of bishops about the Amazon region, “whose integrity is gravely threatened.” Recently, fires ravaging Amazon forest land in Brazil were a focus of the G-7 summit in France.

Francis also urged paying attention to “indigenous peoples, whose age-old wisdom can teach us how to live in a better relationship with the environment.”

Stressing how important the environment’s care is to the Catholic church, Francis wrote an encyclical early in his papacy about everyone’s responsibility to care for the Earth.