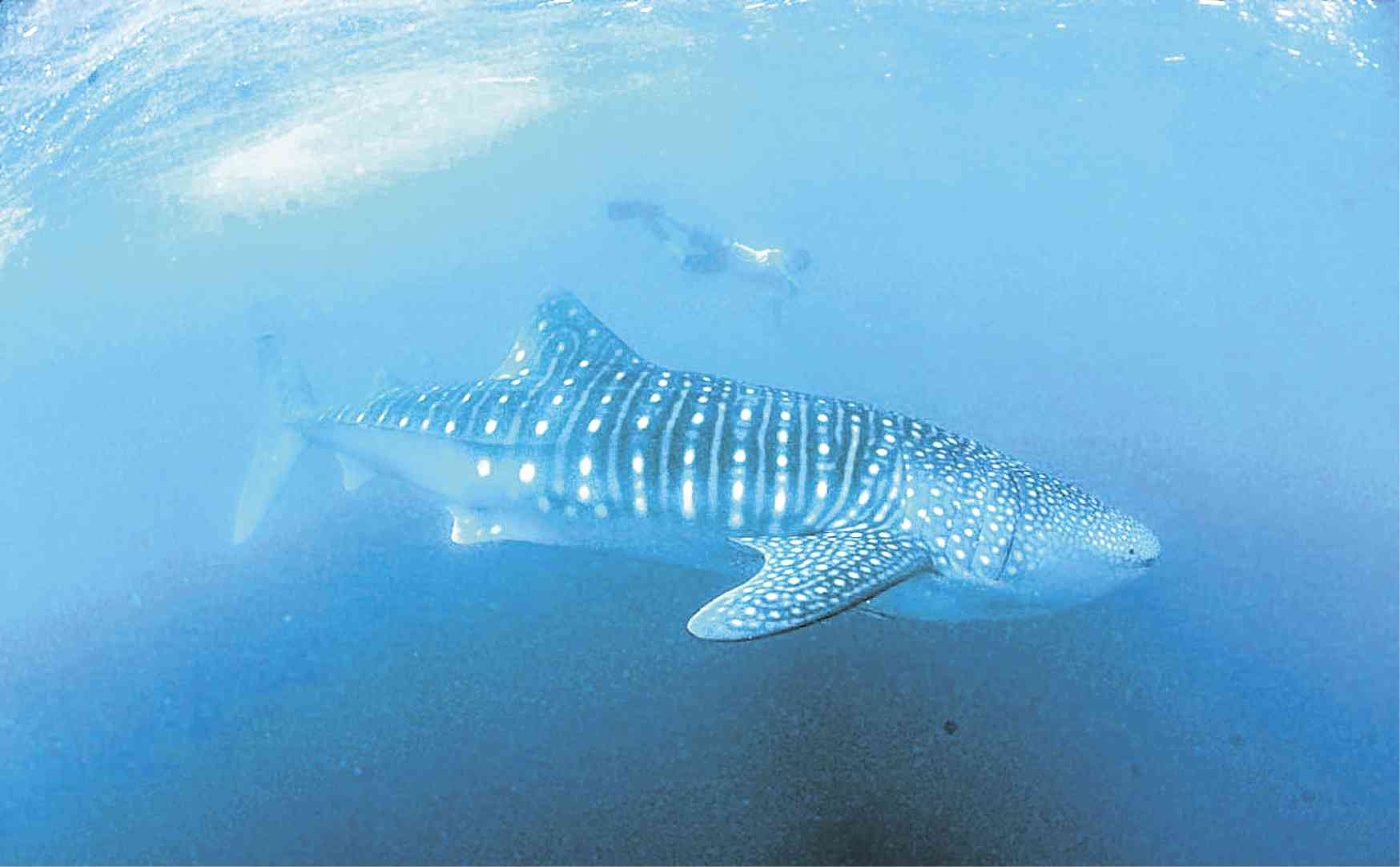 WHALE SHARK TAGGING A diver tags a whale shark in Donsol town in Sorsogon province as part of the local population count. From January to June this year, more than 100 new whale sharks, locally known as “butanding,” were identified in the area. —PHOTO COURTESY OF JURGEN FREUND/WWF PHILIPPINES

DONSOL, Sorsogon, Philippines — Over a hundred new whale sharks were spotted in the waters off this town in Sorsogon province in the first half of 2019, marking the highest number of the endangered species spotted in the area in the past few years, according to the World Wide Fund for Nature (WWF) Philippines.

A total of 104 new individuals were identified in Ticao Pass between January and June, according to a report from the WWF. These new sightings place the total number of whale sharks in Donsol at 676 since the monitoring began in 2007.

WWF said the presence of whale shark juveniles in Ticao Pass suggested that the waters were being used as a “pupping ground.”

“The number of whale sharks spotted in Donsol indicates that its waters are now rich with plankton, which is their primary food. They have even come here with their young,” said Manuel Narvadez Jr., Donsol project manager for WWF Philippines.

Between 2017 and 2018, only 22 new whale sharks had been recorded in Donsol. With the new sightings, those seen in Ticao Pass now account for nearly 40 percent of all 1,724 whale sharks identified in the Philippines.

Locally known as “butanding,” the whale shark (Rhincodon typus) has been listed as an endangered species by the International Union for Conservation of Nature. It is the largest living fish species in the world, with an average size of 7 to 8 meters. Despite their colossal size, their diet mainly consists of plankton and small fish, and they generally pose no threat to humans.

To identify and follow population trends, WWF Philippines has been conducting photo identification activities in Donsol beginning over a decade ago. Each whale shark can be identified based on the unique pattern of spots behind its gills. Just like human fingerprints, no two whale sharks have the same spot pattern.

“These whale sharks that pass by Donsol aren’t just important due to their value to local tourism,” Narvadez said. “They play an important, systemic role in providing resilience to the local ecosystem.”

However, threats to whale sharks persist, including the demand for their meat, fins and oil in the international market. They are also often victims of bycatch or accidental capture, while irresponsible whale shark tourism can also interrupt their feeding patterns.

Dan Faustin Ramirez, WWF Philippines communication and media manager, said that before 1998, when whale sharks were not protected in the area, fisherfolk considered the “gentle giants” as nuisance to their livelihood. 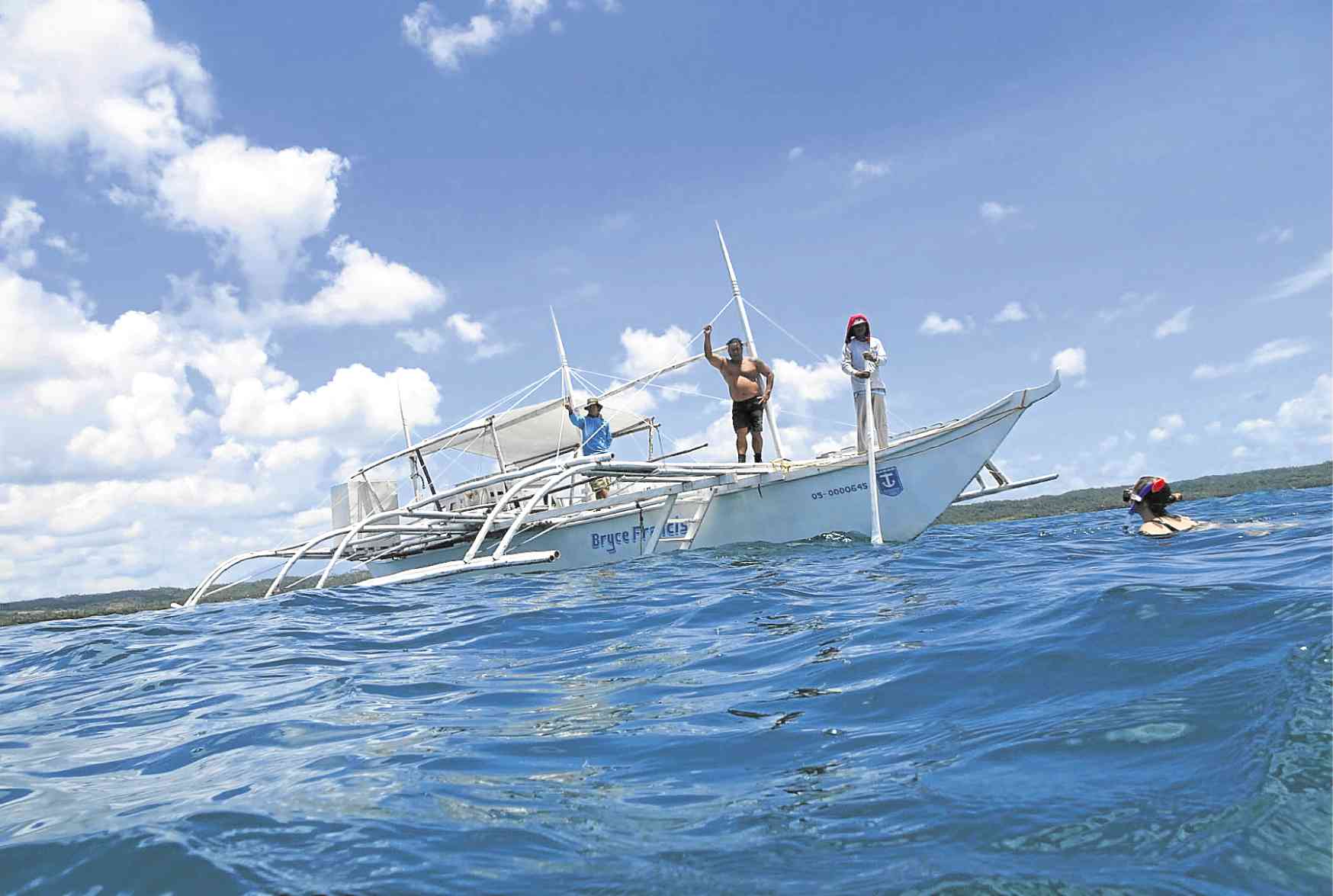 SUSTAINABLE TOURISM Fishermen in Donsol have been trained as “butanding interaction officers” to guide tourists who want to see whale sharks up close. Local guides also act as protectors of the sea creatures that have made Donsol a top destination for sustainable tourism. —PHOTO COURTESY OF WWF PHILIPPINES

Alan Amanse, 51, who is serving his 16th year as president of the Butanding Interaction Officers Association, said local fishermen used to get annoyed by whale sharks when the sea creatures ruined their nets.

But today, they thank the whale sharks for giving them an alternative livelihood through sustainable tourism.

Amanse said many local fishermen had undergone training to become butanding interaction officers. His group has 40 trained guides who accompany tourists wanting to see and interact with butanding.

The guides earn P650 for each three-hour trip accompanying tourists. “When there are many tourists, we get three trips a day,” Amanse told the Inquirer.

Tourists are also discouraged from touching and feeding the butanding.