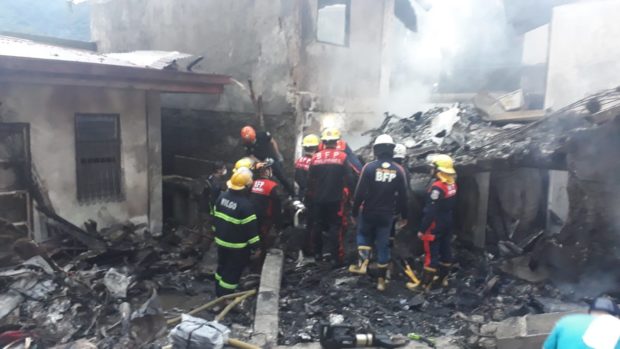 Members of Bureau of Fire look for the bodies of the victims after a medical evacuation aircraft crash on a residential area in Barangay Pansol, Laguna. pdi photo / Richard A. Reyes

SAN PEDRO CITY, Laguna, Philippines — A small private plane transporting a medical team and a patient to Manila crashed in a resort area in Calamba City in Laguna province on Sunday afternoon, killing nine people on board, including the pilot and a copilot, and injuring two people on the ground, police said.

Col. Eleazar Matta, Laguna police director, said in a text message at past 6 p.m. that the plane, an 11-seater King Air 350 with tail number RPC 2296, which came from Dipolog City in Zamboanga del Norte province, exploded in flames when it crashed at 3 p.m. at Miramonte Subdivision in Barangay Pansol in Calamba, a resort area popular for its hot springs and swimming pools.

There were nine people on board the plane — two pilots, a doctor, three nurses, a male patient, the patient’s wife and an emergency medical technician.

As of 8:16 p.m. on Sunday, nine bodies had been retrieved from the wreckage.

Police reports said the plane, which left Dipolog City airport at 1:40 p.m. for Manila, plowed through the Agojo private resort and injured two people there.

Matta said the plane was on its way to Manila and was carrying seven passengers.

Eric Apolonio, a spokesperson for the Civil Aviation Authority of the Philippines, said the light plane was on a medical evacuation flight from Dipolog City in Zamboanga del Norte and disappeared from radar for unknown reasons as it flew over Laguna, about 60 kilometers south of Manila.

The plane was supposed to land in Manila.

The light plane crashed in a swimming pool at a resort in Pansol and ignited a fire in the walled resort compound.

Firefighters and an ambulance can be seen near the scene of the crash as local officials asked villagers to step back to a safe distance.

“The bodies were burned, piled on top of another when we found them,” Jeffrey Rodriguez, head of the Calamba City public order and safety office, said in a phone interview.

Rodriguez said a male patient that the plane was transporting to Manila for medical treatment was among those who died in the crash.

Rodriguez said the plane carried King Air’s medical evacuation team as confirmed by its representatives at the site.

Meanwhile, the Laguna police identified two of the casualties on the ground as Malou, 49, and John Rey, 19, both surnamed Roca.

The crash happened during the monsoon season, when fewer people visit Pansol’s resorts compared to the hot summer months that ended in June. —With a report from AP