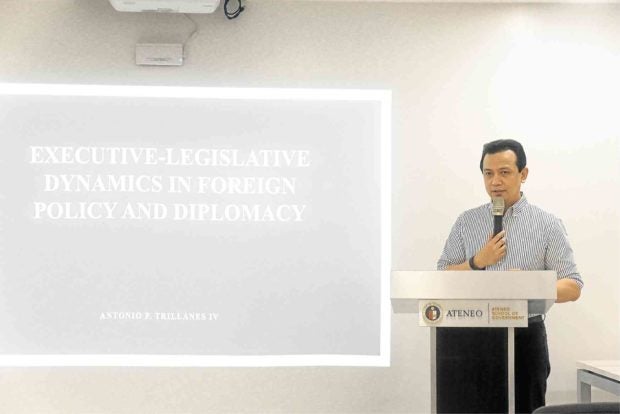 A CLASS ACT From Oakwood mutineer in 2003 to graduate school professor, former Sen. Antonio Trillanes IV has taken his passion from the battlefield to the classroom. This “professor of praxis” (practitioner) teaches international relations at the Ateneo de Manila University and is a lecturer on public policy at the University of the Philippines Diliman. —ATENEO SCHOOL OF GOVERNMENT PHOTO

MANILA, Philippines — When former Sen. Antonio Trillanes IV greeted his 18 graduate students on his first day at the Ateneo de Manila University on Saturday, there was no need for elaborate introductions.

“They seemed highly interested in the lecture and were participative in the discussions,” Trillanes said of his class.

These days, the former Navy lieutenant and lawmaker who led two uprisings against the Arroyo administration, spent more than seven years in detention, and later rose in politics with exposés and fiery privilege speeches that made him an enemy of the Duterte administration, must navigate a more sedate but perhaps more challenging arena — the academe.

For sure, when students at the Ateneo and the University of the Philippines (UP) hold debates and discussions in class, it won’t be on “Mutiny 101.”

Not that he’s brushing politics aside. Trillanes is just intent on being an educator in his master’s program designed for public servants, he said.

“I need to be on my toes. I can’t be complacent on my own stock knowledge,” said the 48-year-old Trillanes, adding that he had to brush up on the two subjects he teaches: Public policy in UP and international relations in Ateneo.

From the time he led the mutinies until his two terms as senator ended on June 30, Trillanes had been slapped with a total of 29  criminal cases by the Arroyo and Duterte administrations.

Still, instead of totally bowing out of public life, Trillanes narrowed his choices to two possible paths: Take up higher studies or teach?

Teaching, Trillanes said, is his way of “giving back to the UP community because it was in UP that I was educated and enlightened.”

It also gives him a chance “to revisit theoretical roots and see if [they] can be reapplied some day if the opportunity comes.”

Teaching graduate students was “exciting” and “rewarding,” the former senator said, though they’ve never tried to ask him about his controversial positions on issues.

“I believe they’re there to learn while they expect me to teach. So there are no political leanings here,” Trillanes said.

On cops in schools

Asked about the police’s bid to enter campuses to check what it described as a “recruitment scheme” by communist fronts, Trillanes said: “It doesn’t make sense that they are fighting an ideology with police presence.”

His profile in the Senate website said Trillanes pursued graduate studies at UP where he got his master’s degree in public administration, major in public policy and program management.

But being part of the academe does not mean he was taking a backseat from the controversies that continue to hound the Duterte administration, Trillanes said, adding that the government had struck back by haling him to court. 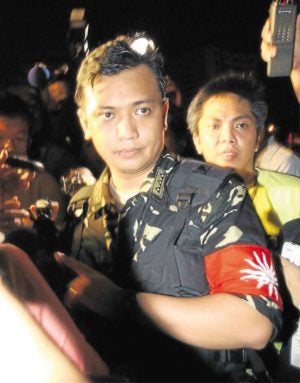 A CLASS ACT From Oakwood mutineer in 2003 to graduate school professor, former Sen. Antonio Trillanes IV has taken his passion from the battlefield to the classroom. This “professor of praxis” (practitioner) teaches international relations at the Ateneo de Manila University and is a lecturer on public policy at the University of the Philippines Diliman. —INQUIRER PHOTO

Included in the 17 are the libel cases filed by President Rodrigo Duterte’s son Paolo Duterte, whom Trillanes had linked to the smuggling of P6.4 billion worth of “shabu” (crystal meth) from China, and the sedition case filed against him, Vice President Leni Robredo and 32 others in connection with “The Real Narcolist” video linking the President and his family to illegal drugs.

“It’s a small price to pay for standing up to what is right,” he said of the cases against him.  “If you don’t want to be pestered, you turn silent. But that will not happen [in my case],” Trillanes added.

He’s not inclined to run in the 2022 elections, but he’s not closing any door at this point, said Trillanes, adding that in the coming weeks, he will help launch and unify the political opposition that includes his own Magdalo group, Tindig Pilipinas, Akbayan and the Liberal Party.

“I am actively participating in the reorganization and unification of the broad political opposition to continue to be the voice of dissent [that’s] ready to mobilize, in case Duterte pursues and initiates gains to hold on to power,” he said.

The unified political opposition will serve as the “base” of the opposition in the 2022 elections, Trillanes said, adding that they want Robredo to be its leader.

Away from the chaos of national politics, the former senator said he has started writing his memoirs. “I just want to put on record [my memories of key events in my life] before they get lost,” Trillanes said.