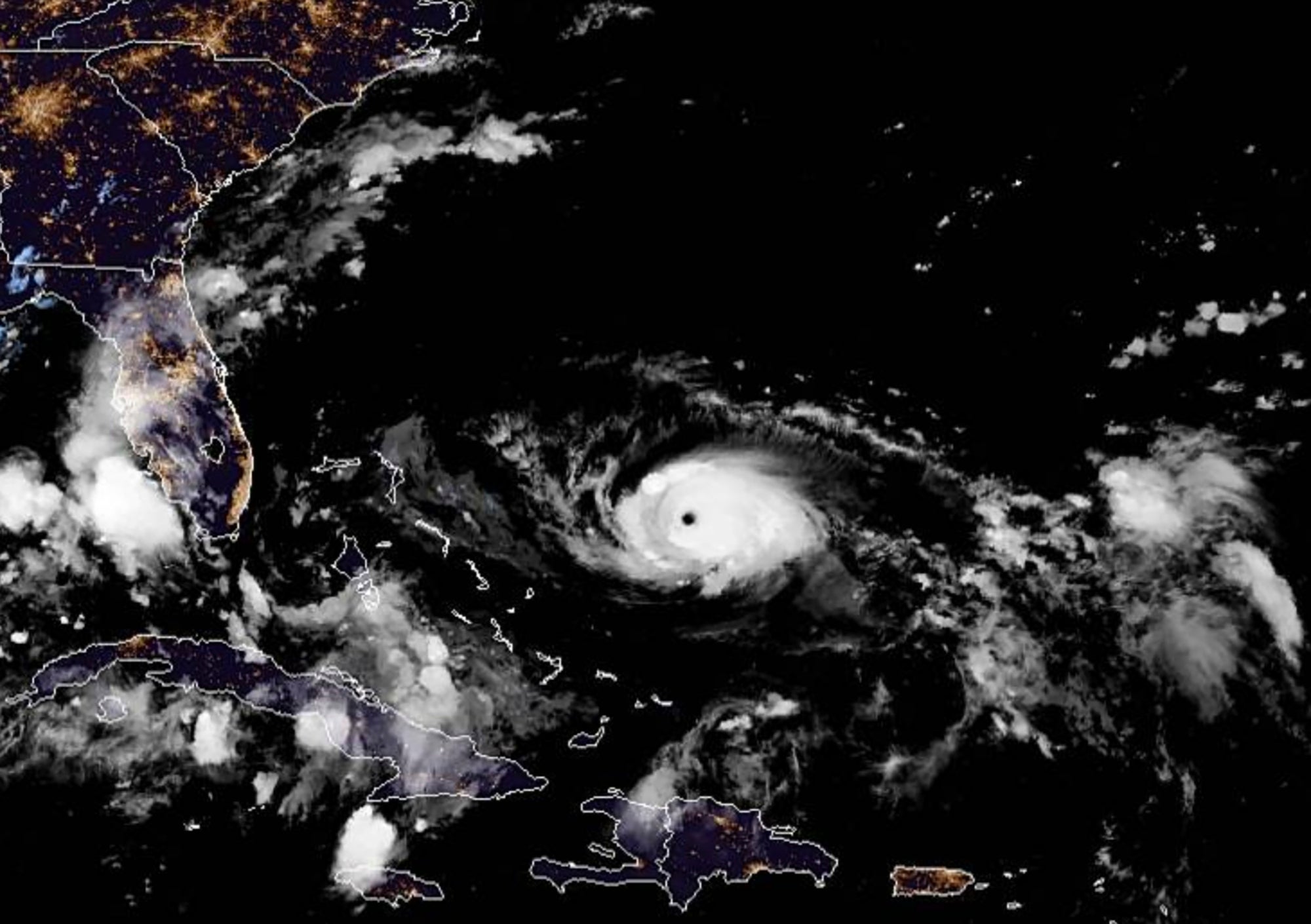 This photo provided by the National Oceanic and Atmospheric Administration shows a satellite view of Hurricane Dorian taken at 10:00 p.m. EDT, Friday, Aug. 30, 2019. (NOAA via AP)

Millions of people in Florida, along with the state’s Walt Disney World and President Donald Trump’s Mar-a-Lago resort, are in the potential crosshairs of the hurricane. Forecasters say Dorian, which had top sustained winds of 140 mph (225 kph) Friday night, will threaten the Florida peninsula late Monday or early Tuesday.

But the National Hurricane Center in Miami cautioned that its meteorologists remain uncertain whether Dorian would make a devastating direct strike on the state’s east coast or inflict a glancing blow. Some of the more reliable computer models predicted a late turn northward that would have Dorian hug the Florida coast.

The faint hope of dodging Dorian’s fury came Friday, even as the storm ratcheted up from a menacing Category 3 hurricane to an even more dangerous Category 4. That raised fears Dorian could become the most powerful hurricane to hit Florida’s east coast in nearly 30 years.

National Hurricane Center projections showed Dorian hitting roughly near Fort Pierce, some 70 miles (113 kilometers) north of Mar-a-Lago, then running along the coastline as it moved north. But forecasters cautioned that the storm’s track remains still highly uncertain and even a small deviation could put Dorian offshore — or well inland. 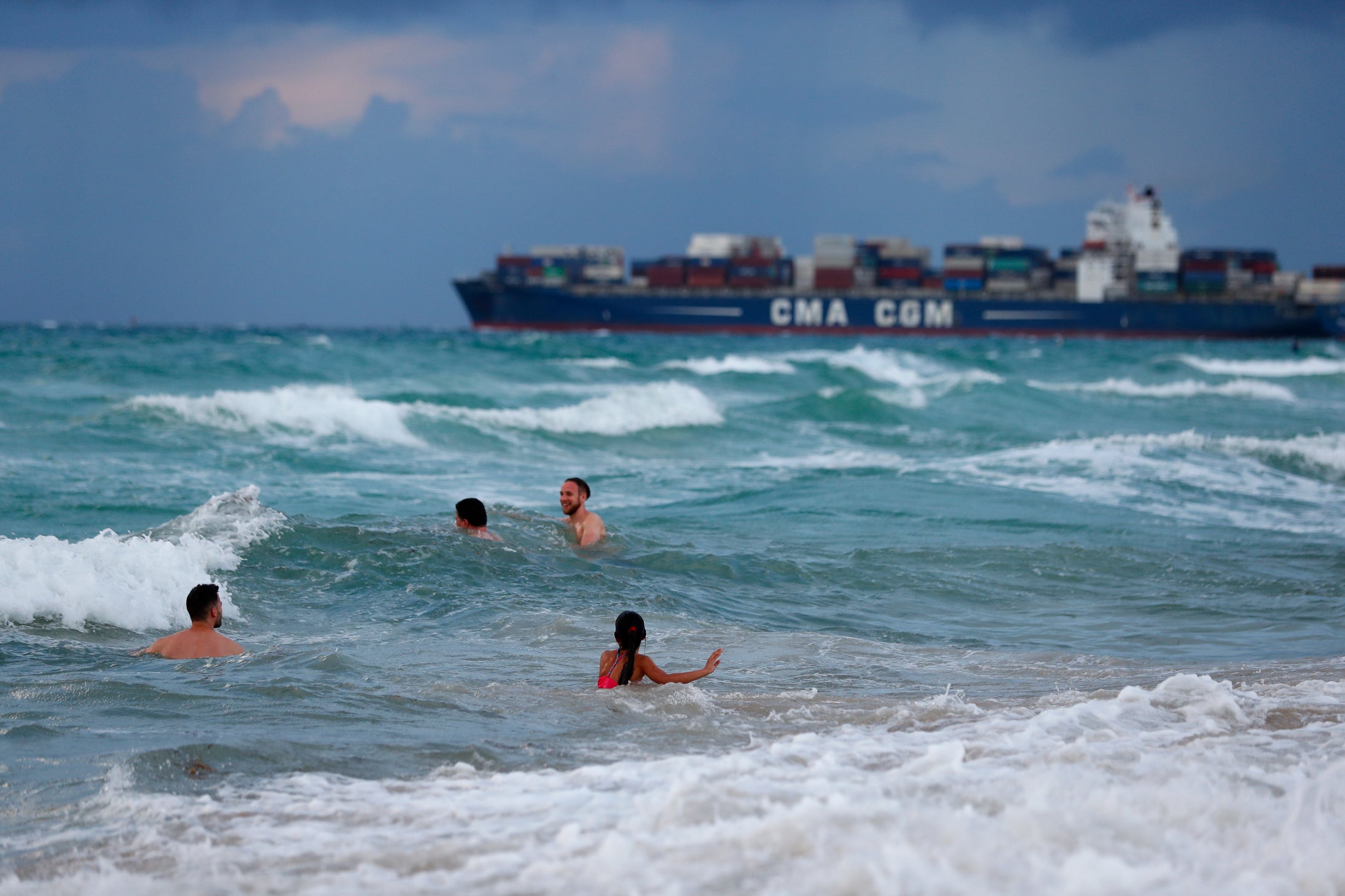 Beach goers on South Beach enjoy the turbulent waters as a container ship heads out to sea, Friday, Aug. 30, 2019, on Miami Beach, Fla. All of Florida is under a state of emergency and authorities are urging residents to stockpile a week’s worth of food and supplies as Hurricane Dorian gathers strength and aims to slam the state as soon as Monday as a Category 4 storm. (AP Photo/Wilfredo Lee)

Trump has declared a state of emergency in Florida and authorized the Federal Emergency Management Agency to coordinate disaster-relief efforts. He told reporters that “Mar-a-Lago can handle itself” and that he is more worried about Florida.

“This is big and is growing, and it still has some time to get worse,” Julio Vasquez said at a Miami fast-food joint next to a gas station that had run out of fuel. “No one knows what can really happen. This is serious.”

As Dorian closed in, Labor Day weekend plans were upended. Major airlines began allowing travelers to change their reservations without fees. The big cruise lines began rerouting their ships. Disney World and Orlando’s other resorts found themselves in the storm’s projected path.

Still, with Dorian days away and its track uncertain, Disney and other major resorts held off announcing any closings, and Florida authorities ordered no immediate mass evacuations.

“Sometimes if you evacuate too soon, you may evacuate into the path of the storm if it changes,” Gov. Ron DeSantis said.

Homeowners and businesses rushed to cover their windows with plywood. Supermarkets ran out of bottled water, and long lines formed at gas stations, with some fuel shortages reported.

At a Publix supermarket in Cocoa Beach, Ed Ciecirski of the customer service department said the pharmacy was extra busy with people rushing to fill prescriptions. The grocery was rationing bottled water and had run out of dry ice.

Coastal areas could get 6 to 12 inches (15 to 30 centimeters) of rain, with 18 inches (46 centimeters) in some places, triggering life-threatening flash floods, the hurricane center said.

Also imperiled were the Bahamas , where canned food and bottled water were disappearing quickly from shelves and the sound of hammering echoed across the islands as people boarded up their homes. Dorian was expected to hit the northwestern part of the Bahamas by Sunday with the potential for life-threatening storm surge that could raise water levels 15 feet (5 meters) above normal.

“Do not be foolish and try to brave out this hurricane,” Prime Minister Hubert Minnis said. “The price you may pay for not evacuating is your life.”  /muf