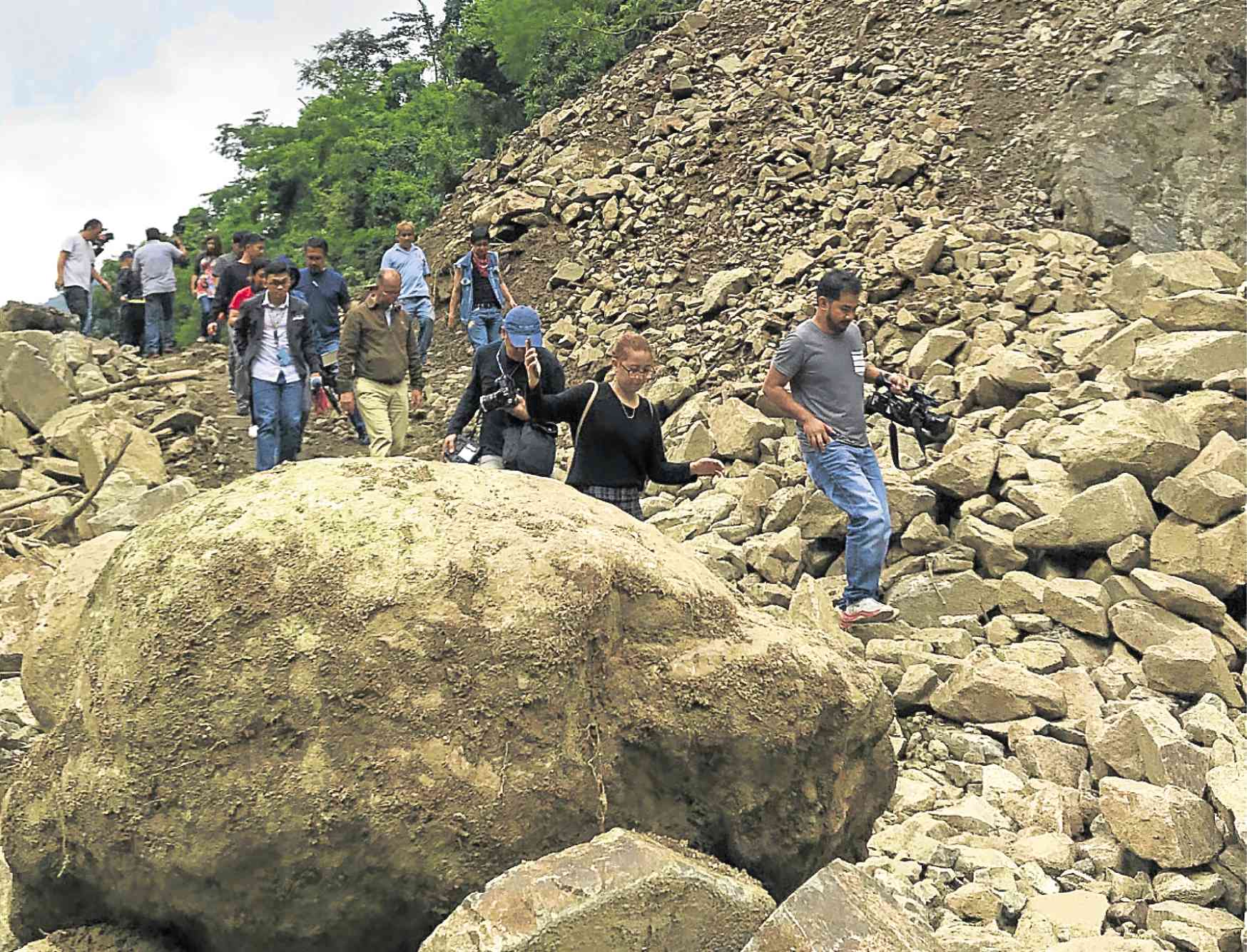 PERENNIAL WOE A team from the Baguio City government inspects a portion of Kennon Road with a boulder slide. The road, which is often overtaken by soil erosion, is under repair. —Vincent Cabreza

BAGUIO CITY—The shortest and most scenic route to this city, Kennon Road, will need at least five years of “rest” to allow unstable portions of the surrounding mountains to settle, Mayor Benjamin Magalong said, citing recommendations of government engineers and geologists.

He said a task force had identified more than 21 sections of the 34-kilometer road as “critically vulnerable,” including 14 “serious weak points.”

Most of these hazardous portions are inhabited and human activities such as vegetable and lemon gardens and small pig farms may be blamed for the weakening of cliffsides, Magalong said.

A rockslide on the road’s Camp 3 section was attributed to an illegal road excavation on top of a mountain there that blocked a natural creek, he said.

The government has spent P400 billion in the last 30 years to clear and repair the zigzag road, each time strong rains trigger rockslides there.

The city receives the highest rainfall in the country but recent monsoon rains have dumped water that exceeds the norm due to climate change, Magalong said.

The task force, composed of government engineers and geologists from various agencies, is putting together a technical working team to draft a comprehensive plan for rebuilding and sustaining the road, considered as the most expensive infrastructure project of the American colonial government.

The task force is also awaiting sonar equipment offered by a Japanese technical firm that could determine the rock density and soil stability of areas frequently hit by erosion.

Kennon Road, named after American Col. Lyman Kennon who oversaw its construction with the help of a multinational road crew, was opened in 1905. The city can be accessed also through Marcos Highway and Naguilian Road. 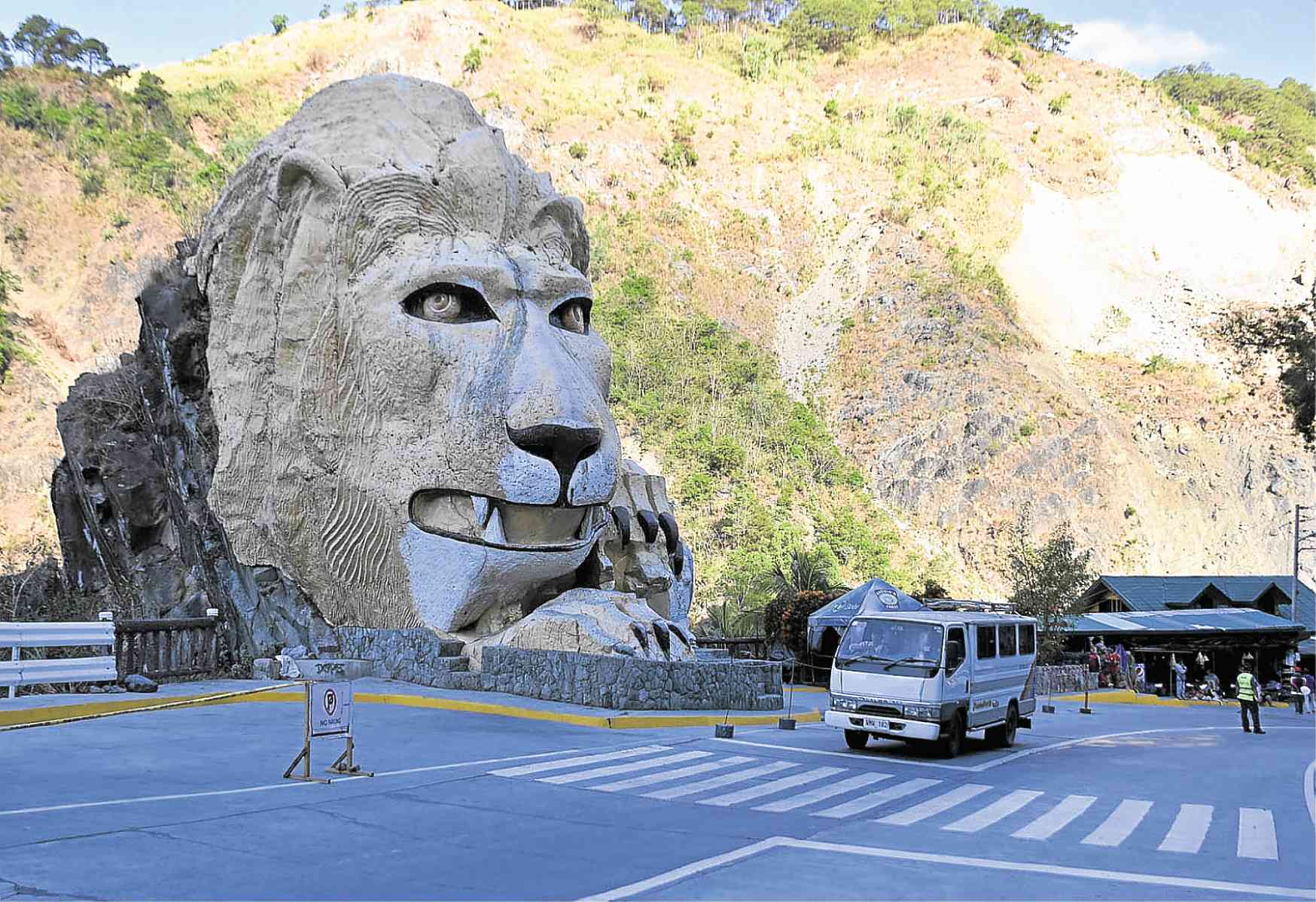 VULNERABLE Sections of Kennon Road, including the iconic Lion’s Head, have been reinforced with concrete walls and cliffside plants to prevent erosion. —REDJIE CAWIS/CONTRIBUTED

But Kennon Road is automatically closed to traffic when strong rains occur because of the landslides.

Between Aug. 9 and 14, monsoon rains triggered rockslides along sections of Barangay Camp 4, which could not be immediately cleared because the top of the mountains appeared unstable, Magalong said.

The mayor and city administrator Bonifacio dela Peña, a former dean of the Saint Louis University College of Engineering, inspected the road on Aug. 16 and found that landslides had occurred more often than the pace of repairing older road damages.

“I would rather condition the minds of people in Baguio and Benguet province that we shouldn’t use Kennon Road for the next five years. Let’s allow the unstable mountainsides to fall and after that let us rehabilitate it,” Magalong said.

Much of Kennon Road’s problems have been traced to the 1990 Luzon earthquake, which devastated Baguio and left the road closed for 14 months.

A comprehensive geological investigation in 1991 and 2010 mapped out more than 400 weak spots along the road. Some of the road’s geological problems were due to old mines that ceased operating in the 1980s.

In 1991, a Japanese engineering report said making Kennon Road strong enough to withstand quakes and typhoons would cost P3.23 billion at the time. The initial plan required opening 471 tunnels encased in thick concrete that would cost the government P1.215 billion.

In 2003, however, the Japan International Cooperation Agency (Jica) prepared a field survey for an alternative road because the cost for infusing massive repairs would be too high.

Jica said the government “reduced the scale of restoration of Kennon Road to the minimum necessary for the daily lives of the residents along the road.”

Citing the Japanese evaluations, Dela Peña said engineers may either topple the loosened cliffside boulders or wait for nature to take its course before roadwork can proceed.

Magalong also asked the task force to deal with the 10,000 residents who live on mountainsides along the road.

Barangay Camp 4, which has jurisdiction over Camps 5 and 6, started as one of the work camps of 2,000 foreign workers who built Kennon Road.

“We have yet to discuss relocating them because that would also affect their livelihood. Many of them come from original Ibaloys, Kankaneys and Ifugao settlers who used to work for the old Benguet exploration mine,” said Joselito Zarate, councilman of Barangay Camp 4.