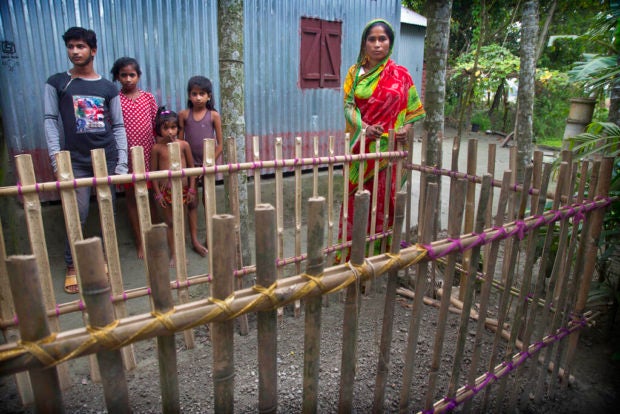 In this Aug. 28, 2019, photo, Halimun Nessa, 32, stands with her children next to the grave of her husband Rahim Ali who committed suicide the day before his children were to appear in front of a National Register of Citizens tribunal, in Barpeta, in the northeastern Indian state of Assam. India on Saturday, Aug. 31 plans to publish a controversial citizenship list that advocates say will help rectify decades of unchecked illegal immigration into the northeastern state of Assam from Bangladesh. Critics of the government’s plan to publish a National Register of Citizens, fear it will leave off millions of people, rendering them stateless. (AP Photo/Anupam Nath)

NEW DELHI — On the day before his five children were to appear in front of a tribunal in India’s northeastern state of Assam to prove they were not in the country illegally, Rahim Ali hanged himself outside their corrugated metal shanty in the Muslim village of Banti Pur, his wife said.

He was worried the children would be excluded from a government citizenship list that advocates hope will stem decades of unchecked immigration, said Halimun Nessa, standing over Ali’s fresh grave. He had feared they would be sent to a detention camp.

“He was saying we don’t have any money to fight this case. He was thinking that his children will be taken away. He went to the market, came back and did this,” said Nessa, adding that she doesn’t know what she’ll do if her children’s names don’t appear on the list that will be published on Saturday.

Critics of the government’s plan to publish a National Register of Citizens, or NRC, fear it will leave off millions of people, rendering them stateless. And the Hindu nationalist-led government of Prime Minister Narendra Modi, which fully backs the citizenship project in Assam, vows to roll out a similar plan nationwide.

Those suspected of being in the country illegally must prove their citizenship under what is seen as a messy, overly bureaucratic system.

Critics view it as a naked attempt to deport millions of minority Muslims, many of whom have entered India from neighboring Bangladesh. But those who have been leading the fight for such a list say the project is meant to protect the cultural identity of Assam’s indigenous people, no matter what their faith is.

A draft version of the registry that was released in June left off 4.1 million of the more than 32 million residents of Assam state. Some people fled, while others took their own lives, like Ali did in Barpeta, about 130 kilometers (80 miles) northwest of the capital of Gauhati.

Those excluded are presumed to be foreigners unless they can prove otherwise at one of hundreds of tribunals presided over by people who are not judges. They have 120 days to file appeals with the tribunals and can take their case to higher courts. If no appeal is filed, a district magistrate makes a referral to the tribunal to strip them of their citizenship.

It’s unclear what will happen to those ultimately branded as foreigners, because India has no treaty with Bangladesh to deport them. Earlier this summer, India’s Supreme Court criticized the central government and that of Assam state, saying thousands of people who had been declared foreigners over the years had disappeared. About 1,000 others are being held in Assam’s overcrowded prisons.

For hundreds of years, the verdant, hilly state of Assam has drawn workers from neighboring Bangladesh to its massive colonial-era tea plantations.

But resentment of these immigrants runs deep. Advocates of a citizenship registry say that because of the influx, foreigners in Assam have gained more political clout than natives.

While advocates insist there is no religious dimension, Assamese historians revel in the ancient kingdom’s repulsion of the Muslim Mughal “invaders.”

In 1983, a mob in Assam massacred more than 2,000 Bengali Muslims. No one was ever prosecuted.

Millions of people whose citizenship status is now unclear were born in India to parents also born in India. The year 1948 was decreed to be the official cutoff date for refugees from Pakistan, including East Pakistan — now Bangladesh. The date was later updated to 1951, and again to 1971, the year Bangladesh became an independent country.

Hundreds of people with voting rights of diverse lineage, including Hindus and Assamese, have been arrested and detained on suspicion of being a foreign migrant.

“I am very shocked that I served 30 years to the nation, now I am a beggar for citizenship,” said army veteran Mohammad Sanaullah, who lives in Gauhati.

Shah, the home minister, has vowed to expand Assam’s registry nationwide, using mandatory identification cards. At the same time, Modi and Shah are expected to resurrect a controversial citizenship bill or take up an obscure constitutional provision to grant citizenship to persecuted believers who entered India illegally from neighboring countries, including Hindus, Sikhs and Christians, but not Muslims.

The registry comes less than a month after the Modi government unilaterally stripped Jammu and Kashmir, India’s only Muslim-majority state, of special constitutional protections that gave it political autonomy and exclusive land rights.

Kashmiris fear that the Himalayan territory, which is also claimed by Pakistan, will lose its culture and demographics in a Hindu land-grab. Much of India applauded the move, with social media filling up with promises to “reclaim” Kashmir.

A team of United Nations experts, including the special rapporteur for freedom of religion or belief, said in July that the NRC could “exacerbate the xenophobic climate while fueling religious intolerance and discrimination in the country.”

Supporters of the registry, however, say the comparison of Kashmir and Assam is superficial and wrong.

Samujjal Bhattacharya, who has been part of a movement in Gauhati against illegal immigration for decades, said the idea that Muslims are being targeted is propaganda pushed by a pro-Bangladeshi conspiracy.

“They are propagating that human rights is violated here. We’d like to ask them, ‘who is violating human rights?’ In our own motherland, our rights are being violated by the illegal Bangladeshis.”

In 2010, the government selected Barpeta, one of Assam’s nine Muslim-majority districts, for a pilot NRC program as part of a plan to verify voter rolls.

When protests erupted about the program in the bucolic village of Khandakar Para, police gunfire killed four demonstrators, including 25-year-old Maidul Mullah. He is buried behind a mosque that dates to 1916, and his gravestone honors him for “sacrificing his life on streets of Barpeta for the cause of NRC.”

Another slain protester was Majam Ali, 55. His widow, Noor Begum, is illiterate, but a neighbor helped her submit documents dating back more than a half-century, including her grandfather’s listing on the original 1951 NRC and tax details, to no avail.

“My husband shed his blood for the NRC,” she said, “Everyone who should be on the list should be on it. Then only will (his) death be worth it.”

Manjuri Bhowmik, a 51-year-old Hindu, dreads what it will mean for her two sons if she is declared a foreigner. Originally from the state of West Bengal, Bhowmik said she had lived in Assam since moving there to marry her husband in 1991. She recently received notice that she was a suspected “D-voter,” or “doubtful voter,” placing her status and that of her children at risk.

Despite submitting copies of ID cards, her degree from Calcutta University and a deposition from her brother, she sat outside a foreigner tribunal in Barpeta waiting for her chance to prove her citizenship.

“People are being harassed,” she said. “This causes great mental stress.” /jpv

In the Philippines, the Department of Health has said that every case of suicide is a tragedy that could be avoided. People who feel that they may be suffering from mental health and need help have been encouraged to call Hopeline hotlines at 804-HOPE (4673), 0917-558-HOPE (4673), or 2919 (toll-free number for Globe and TM subscribers).