MANILA, Philippines – The Philippine government has formalized a deal with a South Korean firm for the upgrade of the Philippine Navy’s three Del Pilar-class vessels in a bid to further improve the fleet’s capabilities. 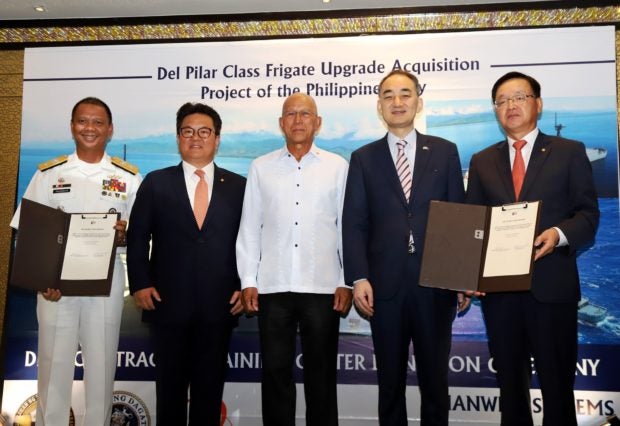 Photo from Department of National Defense

The Del Pilar-class vessels — BRP Gregorio del Pilar (PS-15), BRP Ramon Alcaraz (PS-16), and BRP Andres Bonifacio (PS-17) — are former Hamilton-class cutters of the US Coast Guard, and are  some of the Navy’s most capable ships.

A notice of award earlier released by the DND showed that the contract price for the project is P1.304 billion.

The ships will be upgraded in terms of management system, electronic support, and sonar capability, among others, the DND said.

It will also ensure that the ships will be interoperable with the Navy’s future modern assets, including the two upcoming missile-capable frigates, set to be delivered starting next year.

Hanwha Systems is the supplier of the combat management systems (CMS) of the Jose Rizal-class frigates being built by Hyundai Heavy Industries.

At the contract signing ceremony, Lorenzana also received the symbolic donation of a two-floor building for the Navy’s Simulator Training Center from Hanwha.

Philippine Fleet commander Rear Adm. Giovanni Bacordo said the training center would be built at the Fleet Training and Doctrines Center in Sangley Point, Cavite City or at the Naval Education and Training Doctrines Command in San Antonio, Zambales.

The building will house the CMS simulator, which is part of the Del Pilar-class frigate weapons and upgrade programs, he told Inquirer.net.  /gsg

LOOK: Inside the CMS test site for Philippine Navy frigates