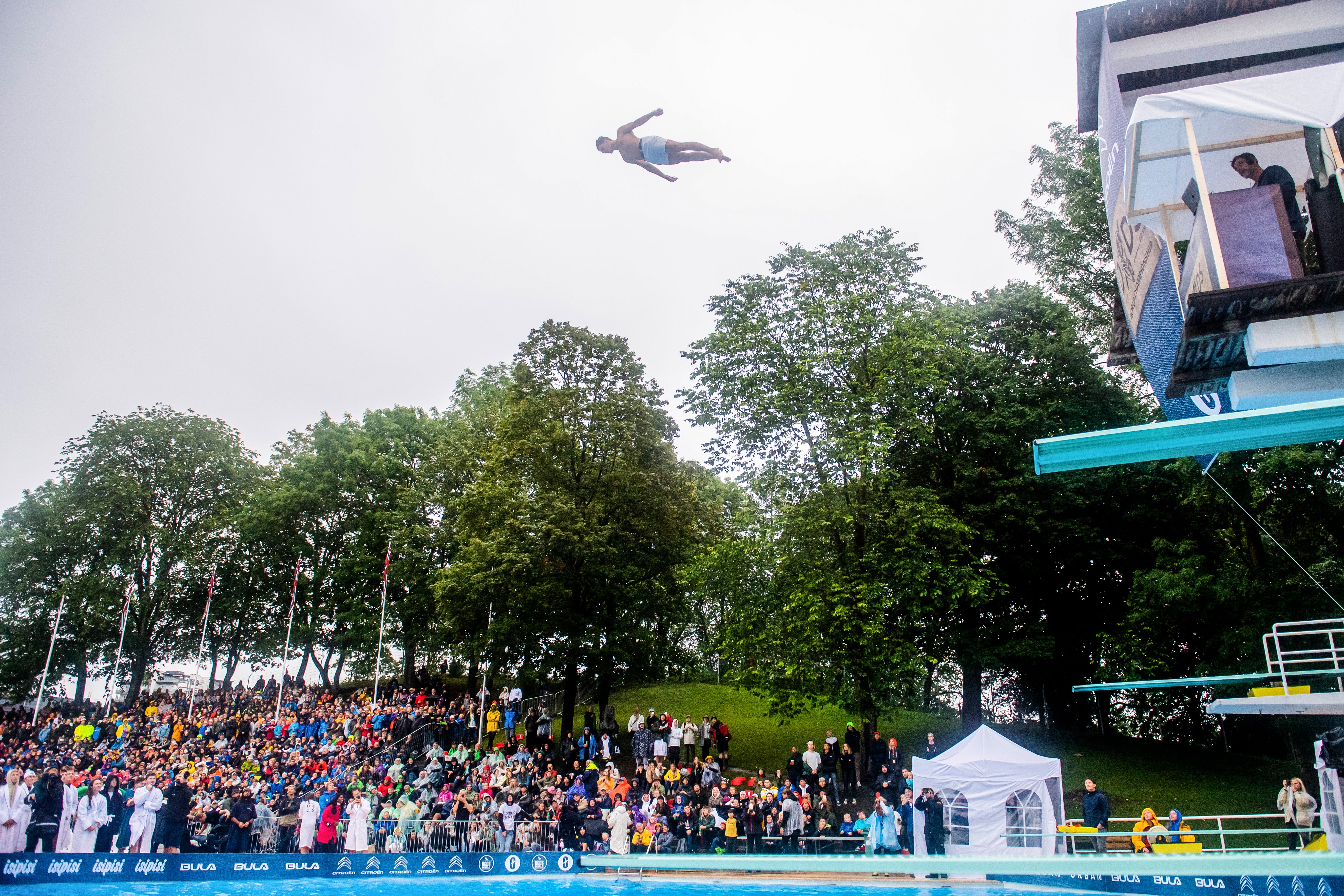 A competitor jumps during the Dods World Championship 2019 on August 17, 2019 in Oslo. – They throw themselves into the air, twisting their bodies and seemingly suspending time before landing with a splash: once a pastime to impress girls, Norway’s crazy sport of “death diving” now attracts dozens of daredevils. (Photo by FREDRIK VARFJELL / AFP) / TO GO WITH AFP STORY BY Pierre-Henry DESHAYES

OSLO, Norway — They throw themselves into the air, twisting their bodies and seemingly making time standstill, before landing with a splash: originally a pastime to impress girls, Norway’s sport of “death diving” now attracts dozens of daredevils.

Around 40 divers converged in the capital, Oslo, in mid-August for the annual world championship of the sport, officially known by its Norwegian name of “dods,” meaning death.

Some svelte and muscular, others paunchy and tattooed, nearly all the competitors are Norwegian, apart from a few from Sweden, Spain, Denmark and Finland.

But death diving requires an element of skill.

Jumping off a 10-meter (33-foot) tower, competitors perform a stunt, holding the pose for as long as they can until it looks like they’re about to do a massive belly flop, before tucking their body into a tight curl at the last second as they are about to hit the water.

At Oslo’s Frognerbadet municipal pool, the divers vying for the world title warm up with stretches, push-ups and headstands to prepare their bodies for the grueling challenge to come.

“You do have a few nerves,” admits Morten Falteng, the oldest competitor at almost 60, who, with four friends, started the sport back in 1972.

“We didn’t think too much about it back then, we just wanted to have fun. We dived, we jumped, we wanted to do something new,” he recalls, clad in an old-fashioned, red-and-white striped swimsuit.

“And there were these five girls that always came to watch us,” he says, his voice trailing off at the memory.

It was another group of Norwegian friends, who in 2008 set up the world championships.

Organizers say it was meant as a somewhat tongue-in-cheek title at the time as the only “international” diver that year was a Norwegian adopted from Guatemala.

To blaring music, competitors flex their muscles, dab, twerk and otherwise entertain the spectators below from the top of the diving tower.

“When I’m up there and it’s a competition, all the fear just locks out. I can do anything when I’m up there,” says Miriam Hamberg, a 22-year-old from Sweden.

For the past two years, the competition has been open to women, who compete in their own category.

Hamberg has won the title both times.

‘No gravity for just a second’

The world championship comprises of two events: classic and freestyle.

In the classic event, divers jump, their arms straight out to form a cross.

Then, just before impact, they tuck their body into a tight ball or pike position called “the shrimp”, before reopening their body immediately after impact to make the biggest splash possible.

For the freestyle contest, spectacular flips, twisting acrobatics and other “slow motion” moves that create a sense of suspending time — all, often improvised — are de rigueur.

Poolside, a jury scores the competitors on their style, timing, originality — and, the size of their splash.

“It’s difficult to describe,” says Joan “Fly” Fuster, a 29-year-old Spaniard, who travelled from Menorca for the competition.

“I really love the feeling of flying and being free. Like there’s no gravity for just a second.”

Hitting the water at 70 kilometers (45 miles) an hour leaves little room for error.

While dods dives are far from the spectacular, death-defying swan dives performed off the cliffs of Mexico and elsewhere, they can still involve bruises and knees-in-the-nose when things don’t go as planned.

Divers occasionally emerge from the water limping or in need of consolation, but mostly there’s a lot of camaraderie among competitors, with cheering, hugging and high fives.

“All you need is a swimsuit and a diving tower and everyone has a blast.”  /muf