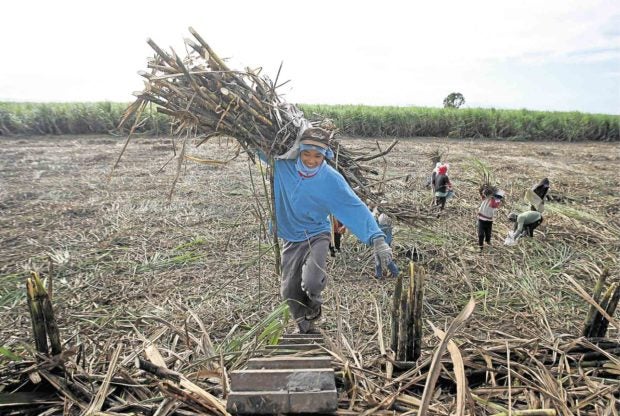 SUGAR LAND For decades, the vast sugar plantation at Hacienda Luisita in Tarlac province has been tilled by farmworkers who are now landowners courtesy of the government’s agrarian reform program. —LYN RILLON

Ligon issued the statement after President Duterte said that the exclusion of the vast estate of the Cojuangco family in Tarlac province from land distribution was the “greatest anomaly” of CARP.

“Let’s respect whatever opinion he [Mr. Duterte] has on any issue,” Ligon told the Inquirer by phone.

He said the issue had been “decided with finality by the Supreme Court” in 2011 or 22 years after the company resorted to distributing shares of stock, not land, to more than 6,000 farmworkers in 1989.

The option was allowed in CARP, which was approved by then President Corazon Aquino, a member of the Cojuangco clan.

“As we have stated before, HLI shall abide by the rule of law. There is no reason not to be inconsistent with that principle,” Ligon said.

Ligon said “it was the lawmakers who provided exemption to direct land ownership.”

“For those who [were] not tenants, the ownership [was held] in common by farmworkers through shareholdings. More than 90 percent of Luisita farmworkers were the ones who decided for shareholdings in three referendums,” he said.

It was during the younger Aquino’s term that 4,195 of 4,500 hectares were given to 6,200 farmworkers as amortization payments based on a November 1989 land value.

The balance of 305 ha was used for roads, drainage system, a cemetery and other common areas.

HLI and farmworkers could not say where the last 112 ha of land in Hacienda Luisita distributed by the President on Tuesday were located. But in December last year, Agrarian Reform Secretary John Castriciones gave certificates of land ownership award for 6,600 square meters each to 117 beneficiaries.

Former Anakpawis Rep. Ariel Casilao said the distribution of 47,377 land titles covering 71,198.35 ha for over 46,000 farmers in the country was meant to appease them.

There were more lands to give away in Luisita, he noted. “It is undisputable that Filipino peasants remain landless and are engrossed in worsened state of poverty and hunger,” he said.

On the other hand, he said farmers who wanted to fight for their rights and joined Kilusang Magbubukid ng Pilipinas, Unyon ng mga Manggagawa sa Agrikultura, the women farmers’ group Amihan and the fishermen’s group Pamalakaya were accused of being members or supporters of the New People’s Army.

Casilao also said land titles were being given so that real estate developers could “buy the land without hassle.”