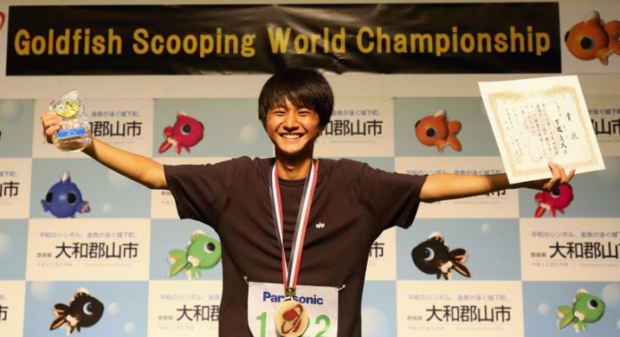 YAMATOKORIYAMA, Nara — The 25th National Championship of Goldfish Scooping was held on Aug. 18 in Yamatokoriyama, Nara Prefecture, one of the top goldfish-producing cities in Japan, boasting annual shipments of about 60 million.

Goldfish scooping, a popular feature at summer festivals, has become a competition. The event began in 1995, organized by the national goldfish scooping federation and the city government.

To keep up with globalization, the latest competition added an English subtitle, the “Goldfish Scooping World Championship,” and the contest is promoted with the phrase “The world champion will be decided here in Yamatokoriyama.” A video explaining the game’s rules was newly subtitled in English.

At the opening ceremony, Mayor Kiyoshi Ueda said, “[Goldfish scooping] is Japan’s unique culture and sport. It’s also a means to interact with an increasing number of foreign visitors. We want to make this event well-known worldwide.”

This year, there were 500 seats available in the individual division for elementary and junior high school students, 800 in the general division and 350 teams in the three-person team division. A total of 1,850 participated in the competition, with 41 of them being foreigners. To qualify, Nara prefectural residents had to survive a prefectural elimination round, while Yamatokoriyama residents needed to win a prefectural or city elimination round. Participants from outside the prefecture were required to either qualify in trials held in the other prefectures or be selected by draw. This year, all foreigners who wished to participate were accepted.

There were 25 fish tanks containing about 1,000 goldfish at the venue called the Goldfish Square, or the city’s multipurpose gymnasium. In the first and second rounds, four people sat around each tank — 100 participants per round — to compete in the individual division. In the finals, two people sat around a tank to scoop as many goldfish as possible within three minutes using a scooper called “poi” whose net is made of washi paper. In the team division, two teams shared one tank, while in the finals, a single tank was set for each team to scoop as many as possible within the three minutes. The team that scooped the most goldfish won.

Ryuta Shimomaki, 17, the winner of the individual general division, scooped 70 goldfish in the final.

“I began scooping goldfish when I was a third-grader at an elementary school,” said the second-year student at the local Koriyama High School. “I’ve been going to the dojo [training place] in the city almost everyday before the event to practice.”

A 40-year-old Canadian participant from Fukui saw a preliminary event in Kanazawa and came to Nara Prefecture just to participate in the event. However, a total of three didn’t qualify him for the second round.

“But it’s a good experience. Very unique, very interesting. I think [it’s] only in Japan,” he said.

None of the divisions were won by foreigners.

“We may need a special training place for foreigners,” the mayor said at the closing ceremony.