PORTO VELHO, Brazil  – Brazilian President Jair Bolsonaro said Wednesday that Latin America’s Amazon countries will meet in September to discuss both protecting and developing the rainforest region, which has been hit by weeks of devastating fires. 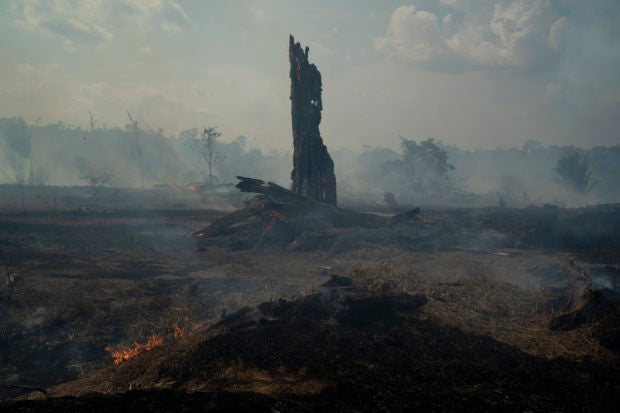 The Brazilian leader also escalated a deeply personal dispute with French President Emmanuel Macron, accusing him of portraying himself as “the one and only person” concerned about the environment.

Bolsonaro’s remarks pushed back at international allegations that, on his watch, the weakening of environmental safeguards in Brazil had set the stage for farmers, developers and others to set fires more aggressively this year as a way to clear land, much of it already deforested.

They also highlighted the Brazilian government’s contention that some international offers of help to fight the fires were an infringement of Brazilian sovereignty over the region.

Macron and other European leaders argue the fires in the Amazon require a global response because of the ecosystem’s critical role in draining heat-trapping carbon dioxide from the atmosphere.

Macron criticized Bolsonaro for allegedly lying to him about his commitments to biodiversity, prompting the Brazilian to accuse the French leader of evoking his country’s colonial past.

On Wednesday, Bolsonaro said Germany and France had tried to “buy” Brazil’s sovereignty.

The acrimony has sidelined a pledge of $20 million from the Group of Seven nations to help protect rainforest in the Amazon, though Bolsonaro said he would accept “bilateral” aid and that Chile was sending four firefighting planes. Britain has pledged $12 million and Canada has offered $11 million.

All Amazon nations except Venezuela will meet in September “to come up with our own unified strategy for preserving the environment, and also for exploration sustainable in our region,” Bolsonaro said after meeting Chilean President Sebastián Piñera in the Brazilian capital, Brasilia.

Latin America countries that contain Amazon rainforest “have sovereignty over the Amazon, that needs to be recognized always,” Piñera said.

A regional conservationist said “the ideal scenario” would be if the Amazon countries agree on how to preserve the region and receive robust international support in order to do it.

“Sovereignty is certainly a fundamental issue here,” said Roberto Troya, regional director for Latin America and the Caribbean of the WWF conservation group. But, he said, the issue can have a negative impact “if used as a shield to isolate and distort the reality of what’s going on on the ground.”

About 60% of the Amazon region is in Brazil. The vast Amazon also spans parts of Bolivia, Colombia, Venezuela, Ecuador, Peru, Guyana, Suriname and French Guiana, an overseas region of France.

Bolivia, which shares a border with Brazil, is also struggling with fires, many of which got out of control in high winds after being intentionally set during an expansion of farming and ranching.

The fires started in July and have consumed 18,000 square kilometers (6,950 square miles) in the Bolivian Amazon and Santa Cruz, the country’s agro-industrial center, according to satellite images assessed by Fundación Amigos de la Naturaleza, a Bolivian environmental group.

President Evo Morales said up to 30% of the burned area had been intact forest, while the rest was set on fire in the annual cycle of land-clearing.

Lingering smoke in the Amazon, meanwhile, is reportedly causing increased respiratory problems — particularly among children and the elderly — as fires in the region rage.

The number of people treated for respiratory issues increased sharply in recent days at the Cosme e Damia Children’s hospital in Porto Velho, the capital of Brazil’s Amazon state of Rondonia.

“This period has been very tough. The dry weather and the smoke causes many problems for children, such as pneumonia, coughing and secretion,” Daniel Pires, a pediatrician and the hospital’s adjunct director, told the Folha de S. Paulo newspaper.

He said the number of cases have more than doubled since the early part of the month.

Fears over health impacts have been growing with the surge in fires, with more than 83,000 blazes documented by the country’s National Space Research Institute since the start of the year. That’s a 77% increase over the same period last year. About half of the fires occurred in the Amazon region, with most in the past month.

The state hymn of Rondonia takes pride in the region’s famously beautiful skies. “Blue, our sky is always blue,” it says. “May God keep it unrivaled, crystal, pure, and always keep it that way.”

Some clouds and a blue sky were partly visible Wednesday. But then the haze settled again blanketing the horizon with thick smoke that covered the early morning red-blood sun.

Annual fires usually occur around August but this year people started them earlier, said Troya of the WWF.

“Maybe the rule of law is not necessarily there,” he said. “Probably people feel that they can do it without any consequence.” /gsg