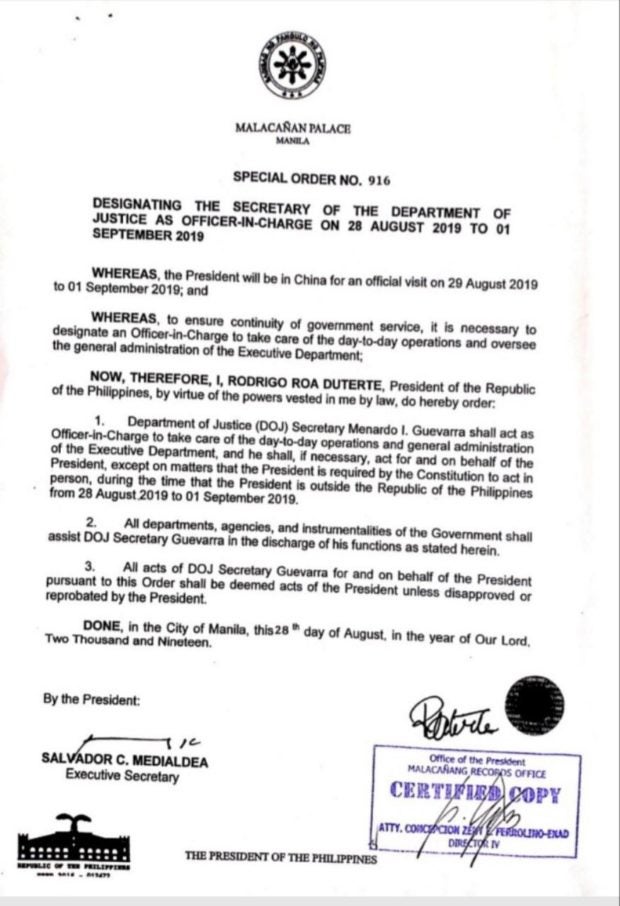 MANILA, Philippines — President Rodrigo Duterte has designated Justice Secretary Menardo Guevarra as the government’s caretaker while he is on a four-day official visit to China.

The President will leave Manila Wednesday night, his fifth visit to China since he took office in June 2016.

The President will meet with Chinese President Xi Jinping in Beijing on Thursday where he is expected to raise the 2016 Hague ruling that invalidated China’s sweeping claims in the South China Sea.

Despite his soft stance against China’s militarization and reclamation in the disputed sea, presidential spokesperson Salvador Panelo said the time has come for Duterte to raise the ruling.

READ: ‘The Time has come’: Duterte to invoke Hague ruling in China visit this August

“The President said that regardless of what they want to hear or not, he will raise that. He said: ‘I will raise this. Whether they like it or not I have to raise it’,” Panelo earlier said.

Aside from the bilateral meeting with Xi, Duterte will witness the signing of several business agreements before travelling to Guangzhou, Guangdong province to watch the Philippine national basketball team Gilas Pilipinas against the Italian team in the Fiba World Cup.

Duterte will return to the Philippines on September 1.