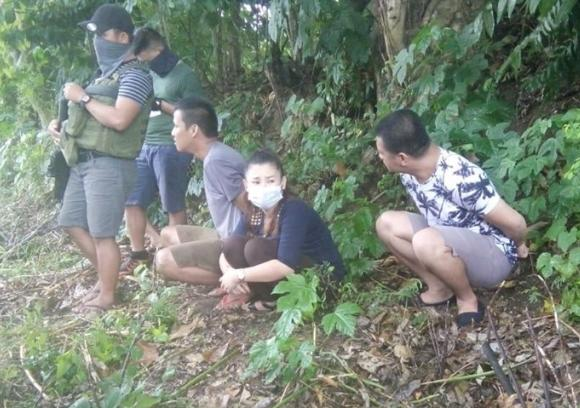 The three suspects wait for the completion of accounting of illegal items seized from them during an August 27 anti-drug sting in Pikit, Cotabato. Photo courtesy of the Army’s 7th IB

Naravy Duquiatan, regional director of the Philippine Drug Enforcement Agency (PDEA) Region 12, said the operation in Barangay Nalapaan of Pikit town was launched around 1 p.m. with support from the Army’s 7th Infantry Battalion.

Seized from them were 13 sachets of shabu and drug paraphernalia.

Duquiatan said the trio, who were on board a pick-up truck, agreed to sell about P12,000 worth of illegal drugs along the national highway.

They were arrested as soon as they handed over the illegal stuff to a poseur-buyer.

Agents said the suspects belonged to a drug ring supplying illegal drugs in the towns of Midsayap, Pikit, and Kabacan in Cotabato, and Pagalungan and Montawal towns in Maguindanao.

Duquiatan lauded the Army and police for providing manpower support to the sting operation.

During the drug buy-bust, Romeo Descartin Cajilig Jr., 45, a resident of Purok 17, Barangay Poblacion in Makilala, sold P1,000 worth of shabu to an undercover buyer, according to Major Arnel Melocotones, Makilala town police chief.

All four suspects are now under police custody, to face charges for violation of the Comprehensive Dangerous Drugs Act of 2002 /lzb