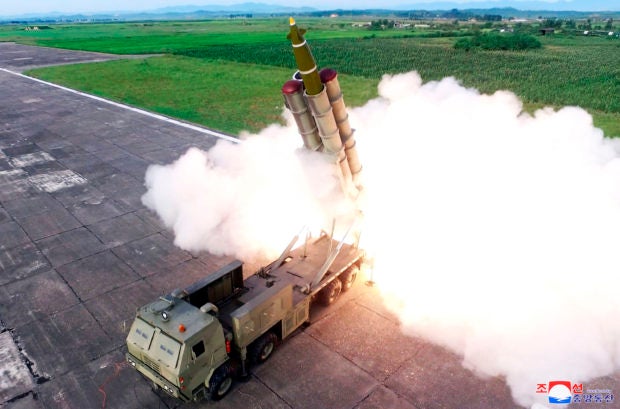 This Saturday, Aug. 24, 2019, photo provided Sunday, Aug. 25, by the North Korean government, shows the test firing of an unspecified missile at an undisclosed location in North Korea. North Korea fired two suspected short-range ballistic missiles off its east coast on Saturday in the seventh weapons launch in a month, South Korea’s military said, a day after it vowed to remain America’s biggest threat in protest of U.S.-led sanctions on the country. The content of this image is as provided and cannot be independently verified. Korean language watermark on image as provided by source reads: “KCNA” which is the abbreviation for Korean Central News Agency. (Korean Central News Agency/Korea News Service via AP)

The United Kingdom, France and Germany issued a joint statement after a closed council briefing by U.N. political chief Rosemary DiCarlo that they requested because of serious concerns at the series of missile launches in recent weeks by North Korea.

The three European council members urged North Korea “to engage in meaningful negotiations with the U.S.,” as President Donald Trump and its leader Kim Jong Un agreed to on June 30 at their meeting in the Demilitarized Zone between the two Koreas.

“Serious efforts by North Korea to re-engage diplomatically and make progress on denuclearization are the only way to guarantee security and stability on the Korean peninsula and in the region,” their statement said.

The three countries stressed that “international sanctions must remain in place and be fully and strictly enforced until North Korea’s nuclear and ballistic missile programs are dismantled.”

Many diplomats and analysts credit 11 rounds of increasingly tougher U.N. sanctions, which have sharply cut North Korea’s exports and imports, with helping promote the thaw in relations between North Korea and South Korea, and the two summits between Trump and Kim.

But negotiations between the U.S. and North Korea have been at a standstill since the second Trump-Kim summit in Hanoi in February broke down over what the United States described as excessive North Korean demands for sanctions relief in exchange for only a partial surrender of its nuclear capabilities.

The statement by the U.S. allies was not joined by the United States or other members of the 15-nation Security Council — and it was at odds with U.S. President Donald Trump’s comments downplaying the recent launches.

In Saturday’s latest launch, North Korea said Sunday that Kim Jong Un supervised the test-firing of a “newly developed super-large multiple rocket launcher.” It appeared to be another demonstration of the North’s expanding weapons arsenal apparently aimed at increasing its leverage ahead of a possible resumption of nuclear talks with the United States.

Trump responded to the launch saying, “Kim Jong Un has been, you know, pretty straight with me. … He likes testing missiles but we never restricted short-range missiles. We’ll see what happens.”

Most of the North Korean weapons tested in recent weeks have shown short-range flight distances. This suggests that North Korea still doesn’t intend to lift its self-imposed moratorium on nuclear and long-range missile tests, which would certainly derail negotiations with Washington.

Britain, France and Germany said “it is vital that the Security Council shows unity in upholding its resolutions,” which have imposed increasingly tougher sanctions on North Korea in an effort to rein in its nuclear and ballistic missile programs.

They blamed “the North Korean regime … for the current dire situation of its people” and stressed that making progress on denuclearization is also the only way to guarantee “a brighter future for the people of North Korea.” /gsg