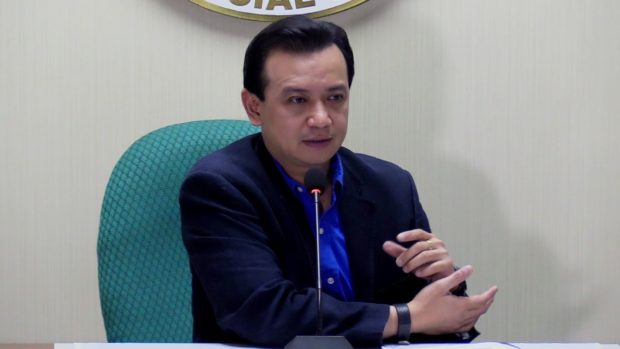 MANILA, Philippines — A self-proclaimed whistleblower claimed on Tuesday that the 2016 accusation against presidential son and Davao City Rep. Paolo Duterte was fabricated by former Sen. Antonio Trillanes IV to destroy the image of President Rodrigo Duterte days before the 2016 elections.

He was accompanied by his counsel Lorenzo “Larry” Gadon, also the lawyer of Peter Joemel Advincula alias “Bikoy” in the narcolist videos.

Speaking before reporters, Tagalog said the story of Advincula encouraged him to surface before authorities since he noticed that Trillanes practiced the same “pattern” he did in the narcolist videos to discredit President Duterte.

He said he initially believed that Rep. Duterte was indeed involved in rice smuggling since the camp of Trillanes showed him a supposed document from the National Bureau of Investigation proving this accusation.

But he said he had doubts on the veracity of the allegations relayed to him by Trillanes when the camp of the former senator stopped communicating with him and did not pursue a case against Rep. Duterte as promised.

Tagalog said the camp of Trillanes offered him an undisclosed amount of cash, but said he refused to accept it since he only wanted to expose the supposed illegal activities of the presidential son.

Gadon said this offer was made the same day that Tagalog attended a press conference sometime in April 2016, where he claimed Rep. Duterte and his wife January were in cahoots with alleged smuggler Davidson Bangayan or David Tan, who was then investigated by the Senate.

Did this cash offer not trigger Tagalog to doubt the motives of former Sen. Trillanes, who was known to be one of the President’s fiercest critic?

Gadon said: “The offer of money was done after the press conference. Tagalog did not explain the motive of Trillanes, but Tagalog declined to get it because at the time he thought the report on smuggling was true. Tagalog agreed because he was the Secretary General of the Coalition of Filipino Consumers.”

He said Tagalog did not ask why he was being offered the cash.

“Tagalog did not ask why on the offer of money. Some people are just silent on some things,” said Gadon.

“He only realized that he was being duped when Trillanes did not push through with the filing of the case, so all that Trillanes wanted was for Tagalog to create some noise, which Trillanes used against Pulong,” he added.

According to Gadon, it will be up to the CIDG to decide which criminal case might apply against Trillanes based on the affidavit submitted by his client.