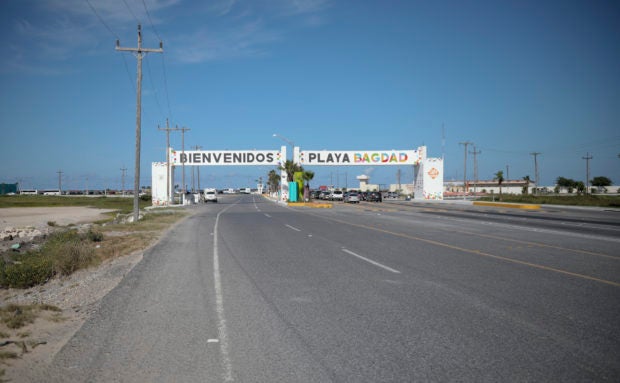 This Aug. 3, 2019 photo shows an entrance welcoming travelers to Playa Bagdad near the border city of Matamoros, Mexico. DEA Special Agent Sammy Parks said Playa Bagdad is a center for loading and unloading drugs bound for the U.S. market. It is a short, easy route without much law enforcement. (AP Photo/Emilio Espejel)

PLAYA BAGDAD, Mexico — At the very eastern end of the U.S.-Mexico border there’s a long strip of sand where the Rio Grande meets the sea. It is called Playa Bagdad – or “Bagdad Beach.”

Unlike the Tijuana-Imperial Beach border on the western end, here, there are no steel pilings marching out to sea to stop migrants from swimming, wading or paddling across to the United States.

In Playa Bagdad, which is spelled ‘Playa Baghdad’ by the Drug Enforcement Agency (DEA), it’s apparently unnecessary: This is a beach for drugs and crime, not migrants.

As attention focuses on the migrant crisis along the border that has drawn harsh rhetoric and actions from President Donald Trump, Playa Bagdad seems to have escaped notice.

Here, there are no walls or border guards, just miles of dunes and Gulf coast beaches marked only by simple wooden huts or awnings held up by sticks.

The only highway ends abruptly in a handful of structures populated by beachgoers looking for alcohol and fishermen who might catch sharks one day and unload cocaine the next.

On the U.S. side, there is not much more besides a single Customs and Border Protection checkpoint, a gun store complete with a shooting range, and a SpaceX hangar where some rockets that might reach Mars are being tested. The nearest city of Brownsville, Texas is 40 kilometers (25 miles) away.

Where the two countries meet lies an expanse of water perhaps 23 meters (25 yards) wide, so shallow that you could walk across at low tide, but few people do.

The reason it’s kept under wraps is simple: Cartels tend to use these coastal plains for purposes like transporting drugs – or as the DEA notes, dumping bodies clandestinely. And they put a premium at keeping migrants away.

“They want to keep the heat off this spot,” said Marco Antonio Álvarez, a rail-thin old man with a greying beard and leather-like skin toughened by the sun.

Álvarez, who spent time in U.S. jails for migrant smuggling, said he still gets paid $300 per month – he won’t say by whom – to watch the expanse of water and two boats.

“If people start crossing the river, you start seeing (CBP) patrol vehicles show up on the other side,” said Álvarez, who usually sits sheltered from the sun in the shade of an old plywood camper that once served as a seafood stand.

Playa Bagdad appeared on maps in 1848, when the border was drawn during the Mexico-American War.  Later, it became the seaport for cotton produced in Texas during the Civil War.

The origin of the settlement’s name is lost to the annals of history. A ship might have run aground and been looted there, a scene that might have reminded some of the “Ali Baba and the 40 Thieves.” Or the person who named it might have been a fan of “The 1,001 and Nights.”

Mike Vigil, a former DEA operation chief, remembered one story which maintains that the U.S. Army might have stationed some camels at Playa Bagdad during its experiments with those animals in the 19th century.

But contraband has always been here in one form or another. Centuries back, silver was trafficked through. During Prohibition, alcohol could be procured. And in the 1980s and 1990s, it was marijuana and Colombian cocaine that made its way across.

“It is a short, easy route without much law enforcement,” added Vigil.

Of the 1,215 members of the National Guard that Mexico has deployed to Tamaulipas, none are seen in Playa Bagdad. They are mainly in the conflictive border cities further west along the Rio Grande Valley.

Three decades ago, people like Álvarez combined fishing with small-scale migrant smuggling, guiding people across to Brownsville for $20 per head. That all ended in the 1980s and 1990s.

“When they started to sell crack, you couldn’t do business anymore because everything was controlled by the mafia,” Álvarez said. 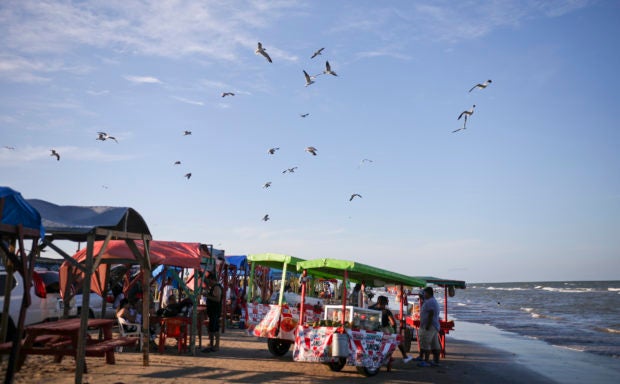 In this Aug. 2, 2019 photo, seagulls fly over food trucks in Playa Bagdad close to the mouth of the Rio Grande, near the border city of Matamoros, Mexico. Unlike the Tijuana-Imperial beach border, on the western end, here, there are no steel pilings marching out to sea, to stop migrants from swimming, wading or paddling across to the United States. (AP Photo/Emilio Espejel)

The city of Matamoros, whose territory covers Playa Bagdad, touts the beach as a great tourist destination.

But Álvarez said that drug cartels completely control it.

“You have to pay them a quota and get their permission,” he noted.

For years, the violent state of Tamaulipas, where Playa Bagdad is located, has been ruled by silence and fear, and the state government itself is suspected of having been infiltrated by drug gangs, with two former governors currently on trial on corruption charges.

One of the key drug-cartels operating in the area is the now-splintered Gulf Cartel.

In 2000, the Gulf Cartel’s armed enforcement wing, The Zetas, split and began an all-out offensive. The Zetas later split themselves again, but still control the westernmost part of the state, while the Gulf Cartel has also splintered and controls the east.

The federal government did not respond to requests for comment, although the current state government headed by an opposition-party governor said it is actively collaborating with U.S. and Mexican federal authorities to combat cartels, often by sharing information.

These days though, the only law enforcement The Associated Press saw were four state police officers who rode through quickly on two ATVs and just as quickly left.

According to DEA, small fishing boats load drugs in Playa Bagdad and run it up the coast to Padre Island, in Texas. Other boats are known to drop off goods that are then loaded onto vehicles and taken into the U.S. by the highway.

Some of the border crossings themselves are under de facto cartel control on the Mexican side.

One man, who was fishing with friends at the mouth of the Rio Grande, recalled seeing a would-be border crosser who cartel gunmen brought back from the river between the two countries at gunpoint.

“They pointed guns at him and brought him back,” he said. “If you want to cross, it is with them.”

He was one of the few who were willing to talk, and even then, the conversation died down every time a boat passed. “You never know who is listening,” said the man, declining to give his name.

There are more than 6,000 disappeared persons in Tamaulipas alone.

“Mass graves have been discovered in the Playa Baghdad area, and there’s a local threat about being ‘taken to the beach,’ which implies someone will disappear,” said Parks, the DEA agent.

The only official presence is a sandbag guard post on the highway between Playa Bagdad and Matamoros, although locals protested at the post this month, saying it was only used to demand bribes.

For Álvarez, “the Guard” doesn’t mean President Andrés Manuel López Obrador’s National Guard either. Instead, it means “former soldiers, marines, and police who report to the gangs.”

Further down the coast in the hamlet of Playa Bagdad, there is a lively scene. Small seafood restaurants stand on stilts and the sound of mariachi music mixes with the shouts of vendors selling oysters. A marine guard post offered some semblance of protection to tourists.

Then, a big man with close-cropped hair descended from a truck selling roast chickens to ask what journalists were doing in the area.

“As tourists, you can film whatever you want,” the man said, emphasizing the word tourists and suggesting anybody else should get out.

“Here, there is freedom of expression,” the man also said. /kga