SAN JUAN, Puerto Rico  — Much of the eastern Caribbean island of Barbados shut down on Monday as Tropical Storm Dorian approached the region and gathered strength, threatening to turn into a small hurricane that forecasters said could affect the northern Windward islands and Puerto Rico in upcoming days. 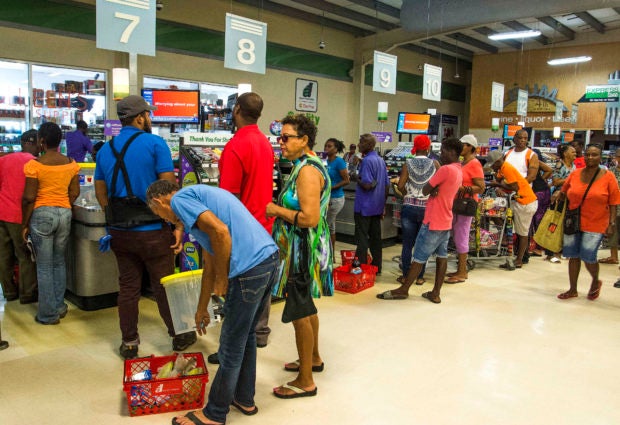 Residents stand in line at a grocery store as they prepare for the arrival of Tropical Storm Dorian, in Bridgetown, Barbados, Monday, Aug. 26, 2019. Much of the eastern Caribbean island of Barbados shut down on Monday as Dorian approached the region and gathered strength, threatening to turn into a small hurricane that forecasters said could affect the northern Windward islands and Puerto Rico in upcoming days. (AP Photo/Chris Brandis)

“When you’re dead, you’re dead,” she said in a televised address late Sunday. “Stay inside and get some rest.”

The U.S. National Hurricane Center issued a hurricane watch for St. Lucia and a tropical storm warning for Barbados, Martinique, St. Lucia and St. Vincent and the Grenadines.

It also issued a tropical storm watch for Puerto Rico, Dominica, Grenada, Saba and St. Eustatius. The storm was expected to dump between 3 to 8 inches (8 to 20 centimeters) of rain in Barbados and nearby islands, with isolated amounts of 10 inches (25 centimeters).

As of 5 p.m. EDT Monday, the fourth tropical storm of the Atlantic hurricane season was centered about 60 miles (95 kilometers) southeast of Barbados and moving west at 14 mph (22 kph).

Maximum sustained winds were at 60 mph (95 kph). Forecasters said it could brush past southwest Puerto Rico late Wednesday as a Category 1 hurricane and then strike the southeast corner of the Dominican Republic early Thursday.

In St. Lucia, Prime Minister Allen Chastanet announced that everything on the island of nearly 179,000 people would shut down by 6 p.m. EDT on Monday, with the hurricane expected to hit around 2 a.m. EDT on Tuesday.

“We are expecting the worst,” he said.

Some were still boarding up windows and buying food and water, but not Joannes Lamontagne, who lives in the island’s southwest region. He said by phone that everything at his hotel, Serenity Escape, was already protected.

“I don’t wait until it’s announced,” he said of the storm. “We’re always prepared no matter what.”

Meanwhile, in Barbados, many of the 285,000 inhabitants heeded the government’s warning, including Fitz Bostic, owner of Rest Haven Beach Cottages.

He said he’s prepared in case officials shut down power and utility services as they have in previous storms.

“We have to be very cautious,” he said in a telephone interview. “The word ‘storm’ frightens me man. I’m very nervous.”

In the U.S. territory of Puerto Rico, hundreds of people have been crowding into grocery stores and gas stations to prepare for Dorian, buying food, water and generators, among other things. Many are worried about power outages and heavy rains on an island still struggling to recover from Hurricane Maria, a Category 4 storm that hit nearly two years ago.

Some 30,000 homes still have blue tarps as roofs and the electrical grid remains fragile and prone to outages even during brief rain showers.

Forecasters said the storm could pass near or south of Puerto Rico on Wednesday and approach the Dominican Republic on Wednesday night.

Also on Monday, a new tropical depression formed between the U.S. eastern coast and Bermuda. It was located 295 miles (480 kilometers) southeast of Cape Hatteras in North Carolina and was moving east at 2 mph (4 kph) with maximum sustained winds of 35 mph (55 kph). It was expected to become a tropical storm late Monday or Tuesday. /gsg