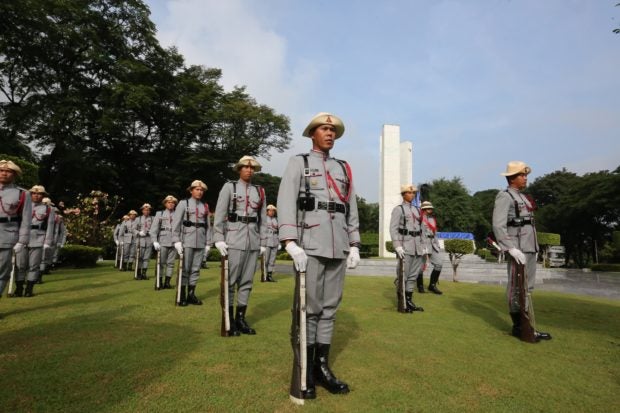 MANILA, Philippines — A few days before his scheduled departure for China, President Rodrigo Duterte decided to skip the National Heroes’ Day rites on Monday because he was “not feeling well.”

Presidential spokesperson Salvador Panelo announced that the President was “unable” to attend the wreath-laying rites at Libingan ng mga Bayani in Taguig City and was to be represented by Speaker Alan Peter Cayetano at the early morning event.

The President’s longtime aide, Sen. Christopher “Bong” Go, told reporters at Fort Bonifacio that the chief executive was unwell after attending so many meetings and paperwork over the weekend.

“The President has to rest. He is indisposed, he is feeling ill,” Go said of the President, who was in Manila.

“The President is already 74 years old. Anyone can also feel unwell. Let us not force him,” said the senator, who was with the President until 4:30 a.m. Monday.

Go said the President had to attend to so many paperwork and private meetings over the weekend, including one with Moro National Liberation Front founding chair Nur Misuari.

However, Go said the President was well enough to still push through this week with his visit to China.

“Yes, that will push through, definitely,” Go said, adding that he would be joining the President’s delegation.

Go said there was no reason to worry about the President’s health, saying he was scheduled to visit the wake of a slain soldier later in the day.

In his message for National Heroes’ Day delivered by Cayetano, the President called on Filipinos to reflect on history and honor the country’s heroes who fought for freedom and the Philippines’ democratic ideals.

“We recognize their heroism not only by erecting statues in their honor, but by uplifting the welfare of the poor and marginalized for it is through our small deeds that their spirit of valor can live on,” he said.

The President urged Filipinos to “make our forebears proud of our triumphs as a people by being everyday heroes who will reach out to those who are in need, especially to the ones who have been neglected by society.”

For his part, Cayetano sought to honor unsung heroes in the armed forces and law enforcement “who have shed blood, sweat, tears, in the defense of this nation.”

The Speaker also paid tribute to the sacrifices made by uniformed personnel, overseas Filipino workers (OFWs) and national athletes.

At the Heroes’ Day rites, he singled out a 104-year-old veteran who had been a fixture at flag ceremonies in his city.

“Ka Peping is 104 years old, but he never misses a flag ceremony in the city of Taguig and he always makes an effort to stand up and salute our flag. That is commitment. That is a choice that he made,” Cayetano said.

Meanwhile, detained Sen. Leila de Lima on Monday reminded Filipinos of the need to protect the freedoms the country was enjoying now and called on them to resist the culture of fear and impunity felt under the current administration.

In a statement, De Lima said the best way to honor those who spoke up against abuses and oppression of foreign colonizers, and to defend people’s rights and liberty was to secure the gains they had won.

Sen. Francis Pangilinan said National Heroes’ Day should also be a chance for Filipinos to be heroes for the environment.

She said these include the OFWs who endure being separated from their families, the daily commuters who brave the traffic, the workers, entrepreneurs and employers who go through the daily grind, and the volunteers and social workers.