Around the world, mosquitoes are winning their war of attrition. With the help from a tiny bacterium, scientists are fighting back.
Asia News Network / 03:39 PM August 26, 2019 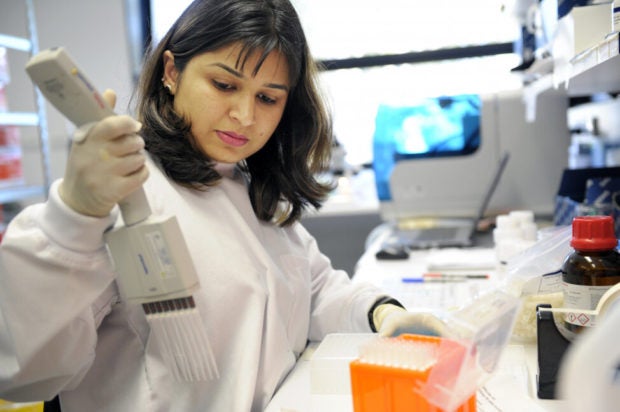 BANGKOK  — The battle between humans and mosquitoes has been raging for centuries. For as long as humans have existed, mosquitos have been there, right alongside us, making us sick.

Dengue alone causes 390 million infections a year, and as much as 40 percent of the world’s population lives in a place where dengue is a risk. As our world’s climate changes, even more people will be exposed to these mosquitoes, and the diseases they bring with them.

When it comes to mosquito control, the traditional methods don’t appear to be standing up to the sheer scale of this challenge.

Take mosquito breeding site destruction as a strategy, for example.

“You have to only spend a short amount of time in any growing, tropical, large city and imagine that you’re going to have to find all the pools of water where mosquitoes are breeding, and you can understand the enormity of it and how impossible it is to try to remove them all,” explains Professor Scott O’Neill, a microbiologist, and the director of the World Mosquito Program, non-profit organization dedicated to the eradication of mosquito borne diseases.

And as far as chemical spraying goes, O’Neill is no less pessimistic.

“What we know is that the mosquitoes that transmit dengue are progressively getting more and more resistant to the chemicals they use for control. Eventually very few of those chemicals are going to work very well anymore.”

What scientists have found is that when this particular bacterium is introduced into that particular mosquito, it prevents the dengue virus from being able to replicate and grow, reducing the likelihood that that mosquito can pass the virus to a human.

The World Mosquito Program seeds a local area by releasing lab-raised mosquitos that have been given the Wolbachia bacteria. And everything is done with the active consent of local communities.

“We don’t operate under the assumption that just because scientists think the intervention is good that communities should just accept it,” said O’Neill.

“And if communities are not wanting, even if the government has approved it, then we don’t deploy,” he added.

The initial results are incredibly promising.

In northern Australia, where the group began releasing wolbachia infected mosquitoes in 2011, they have seen a lasting reduction in the transmission of dengue by about 98 percent.

WMP has several projects across Asia—in Sri Lanka as well as in Vietnam—but none of these projects is as big as the one in Yogyakarta, Indonesia, a city of about half a million people.

The World Mosquito Program, in collaboration with Gadjah Mada University, has divided the city into 24 square kilometer clusters. Twelve of the clusters have received the Wolbachia-treated mosquitos and twelve have not. When the people in the are of study report to clinics and hospitals with a fever, they’re tested for dengue and enrolled in the study.

If patients test negative for dengue, they’re placed into the control group. If dengue is detected they get placed in the intervention group and are tracked according to their location to see if they live in a treated or untreated area of the city. The results of this blind study aren’t expected until the end of 2020.

But results are already coming in on another Yogyakarta study.

A simple comparison of one area of the city with Wolbachia mosquitoes to another area without those mosquitoes, suggests the intervention has led to an 80 percent reduction in dengue transmission.

In studying the impact of Wolbachia on dengue transmission, scientists in Vietnam have found that Wolbachia is actually even more effective at stopping the growth and transmission of dengue in the wild than it is in laboratories.

At this point, the World Mosquito Program estimates that their intervention costs about 10USD per-person-protected.

“We believe over the next three or four years we’ll pull that number down to around 2 dollars per person protected,” said O’Neill. 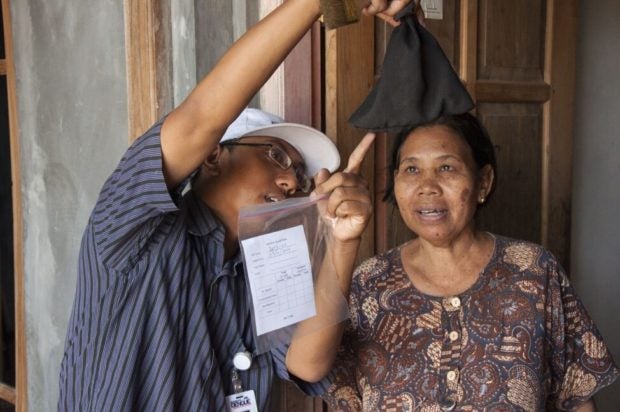 A staff member shows a resident in Yogyakarta some of the different mosquito species caught in a mosquito monitoring trap. WORLD MOSQUITO PROGRAM via Asia News Network

And, according to cost-benefit projections created in collaboration with the United States’ Brandeis University, London School of Tropical Medicine and Hygiene as well as the Oxford University Clinical Research Unit in Vietnam, fully scaled-up Wolbachia releases may end up being cost-saving for governments in the long term.

The study expects that this intervention can save governments about 50 million USD per year, which would offset the total cost of such a program in a large city within about a decade.

The World Mosquito Program has big plans for Wolbachia mosquitoes.

“We have put the intervention to over 3 million people and our goal in the next 5 years is to expand that to be over a 100 million people,” said O’Neill.