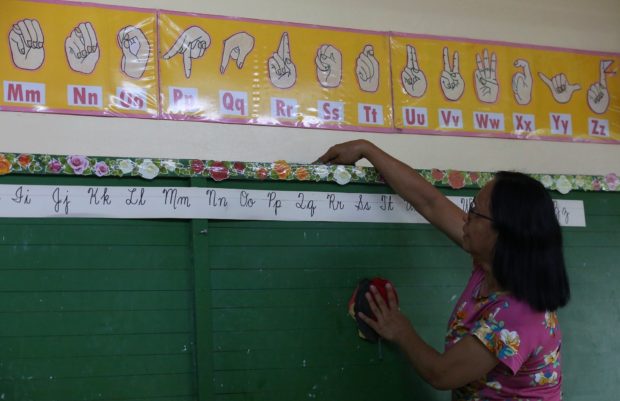 WRITING TOOL A teacher reaches for a chalk above the blackboard. —LYN RILLON

MANILA, Philippines — “Why should teachers pay for chalk and bond paper out of their own pocket when police officers get bullets for free?” a Twitter user wrote in a viral post last week, quoting a public school teacher.

As though in response, Deputy Speaker Vilma Santos-Recto has filed a bill creating a “teaching supplies allowance” amounting to P10,000 per year for each of the country’s 840,000 public school teachers.

Under House Bill No. 3449, or the proposed Teaching Supplies Allowance Act, the Batangas representative wants to give government teachers an allowance for the purchase of chalks, erasers, forms and other classroom supplies and materials.

Based on the proposal, an initial amount of P3,500 per teacher per school year shall be charged against the current appropriations of the Department of Education (DepEd).

An additional P6,500 per teacher shall then be charged against the available funds and/or savings of the DepEd.

“Thereafter, the amount of P10,000 per teacher per school year shall be included in the DepEd budget for Teaching Supplies Allowance under the General Appropriations Act,” according to the bill.

“Aside from spending for their personal and family needs, teachers also have to shell out some more money from their own pockets for the materials they use in teaching,” Recto said.

Her bill also seeks to increase the cash allowance of teachers by 185 percent, from P3,500 to P10,000 per teacher per school year.

Recto cited Republic Act No. 4670, or the Magna Carta for Public School Teachers, which mandates that the salaries of public school teachers “shall be such as to insure teachers a reasonable standard of life for themselves and their families.”

Unfortunately, she said their salaries were currently bound by the salary standardization law (SSL), “hence, compensation increases would be subject to comparisons with the qualification, skills and difficulties of other positions in the government.”

“Thus, one of the urgent ways to respond to the clamor of our public school teachers for much needed support is to grant them with additional benefits in the form of cash allowances, which would not be subject to the SSL,” Recto said.