Ilocos Norte was placed under a state of calamity as Severe Tropical Storm “Ineng” left parts of Luzon, including Metro Manila, underwater on Saturday. At least two persons were confirmed dead in Ilocos.

The state weather bureau also reported on Saturday a low pressure area (LPA) 1,735 kilometers east of Mindanao and still out of the Philippine area of responsibility (PAR). 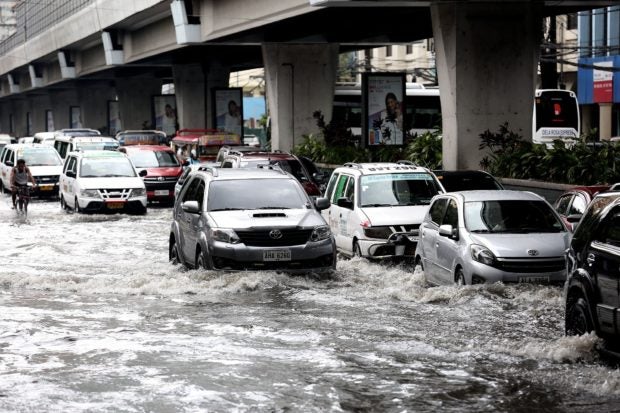 WATERWORLD Motorists negotiate the flooded portions of Quirino Avenue and Taft Avenue in Manila on Saturday. —RICHARD A. REYES

Quirino Avenue, Plaza Dilao, United Nations Avenue, Kalaw Avenue and Buendia Avenue were in ankle-deep waters, which began to subside at around noon.

A Philippine Airlines flight from Guangzhou and a Qatar Airways flight from Doha were among those diverted to Clark, as well as four Cebu Pacific flights from Legazpi, Tagbilaran, Ozamiz and Davao and one Air Asia flight from Cebu. 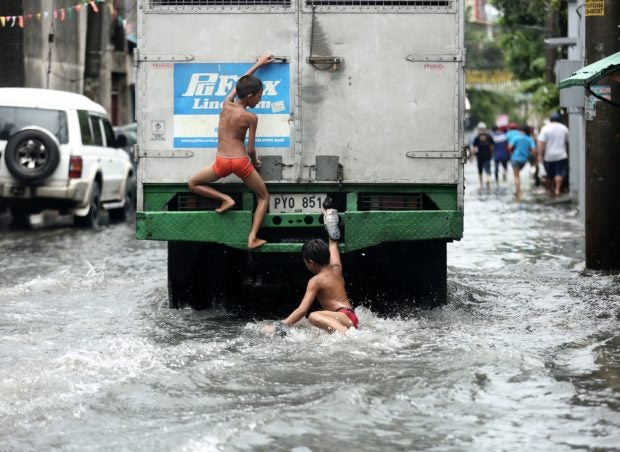 In Batanes province, strong rains and winds forced an estimated 288 families in Itbayat town to move to higher ground.

Still recovering from the July 27 earthquakes, Itbayat’s residents were taken to government buildings, while others moved to the homes of relatives to wait for the typhoon to pass, according to Dante Balao, Cagayan Valley director of the Office of Civil Defense.

In Ilocos Norte province, Laoag City was placed under a state of calamity by the city council on Saturday when massive floods submerged a number of houses.

A 17-year-old girl was killed and two children were injured by a landslide that buried two houses in the town of Pasuquin.

The remains of Pauleen Joy Corpuz were recovered at 9 a.m., six hours after the landslide struck at 3 a.m.

First responders pulled out 9-year-old John Lloyd Trumpo and 11-year-old Princess Shalane Trumpo who were immediately taken to a hospital for treatment.

A second fatality was reported in Laoag City.  Rescuers said Ricky Manglanlan, who drowned while attempting to rescue flood victims, was dragged down because he was wearing heavy rain gear. 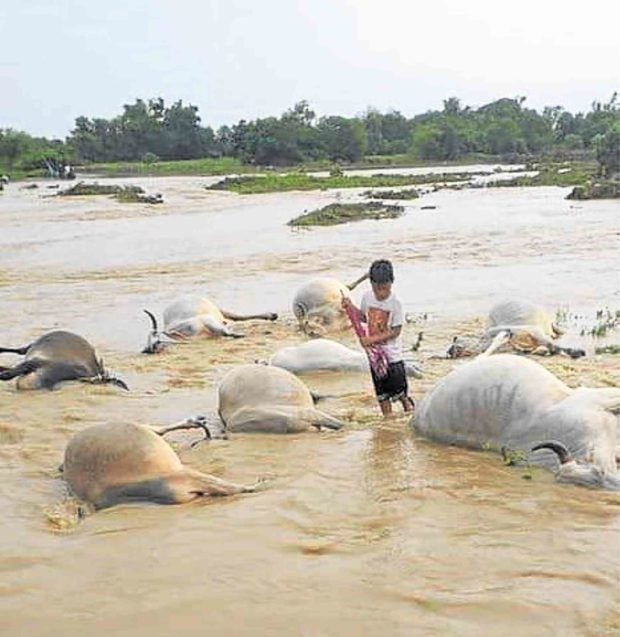 As of 5 p.m. on  Saturday, Ineng was 275 km north-northwest of Basco, Batanes, moving at 20 kilometers per hour.

By Sunday, the storm will have left PAR and will be in southeastern China.

Meanwhile, the LPA outside Mindanao will be named “Jenny” when it becomes a tropical depression and enters PAR, the Philippine Atmospheric, Geophysical and Astronomical Services Administration (Pagasa) said on Saturday.

“The likely scenario is it could enter PAR early next week, around Monday, though uncertainty is still high since it is still far from PAR,” said Pagasa weather forecaster Robb Gile.