After three years of skirting law enforcers through the underbelly of online wildlife trafficking, a man notorious for selling endangered animals on Facebook was finally nabbed on Friday by agents of the National Bureau of Investigation and the Department of Environment and Natural Resources (DENR) in Manila.

Lim was arrested during a buy-bust sting in Sta. Mesa, Manila, through a former associate-turned-asset.

These include three peregrine falcons, which are forbidden from being traded under the UN Convention on International Trade in Endangered Species of Wild Fauna and Flora, said Philippine Center for Terrestrial and Aquatic Research executive director Emerson Sy. 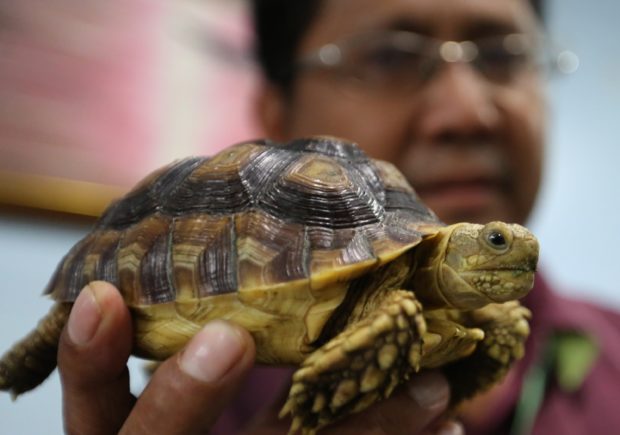 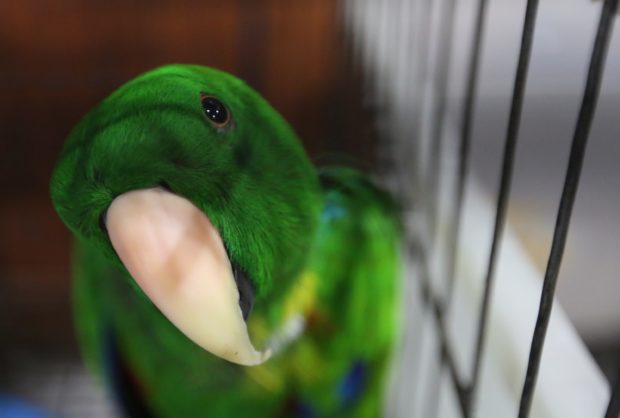 ENDANGERED Dr. Rogelio Demelletes Jr. of the DENR-Biodiversity Management Bureau shows a sulcata tortoise and an eclectus parrot. They were among the rare animals and birds rescued from an online wildlife trafficker. —PHOTOS BY JOAN BONDOC

These will be cared for in the Ninoy Aquino Wildlife Park in Quezon City, Nuqui said.

Lim, believed to have been engaging in illegal wildlife trafficking as early as 2014, was an especially elusive suspect, said Dr. Rogelio Demelletes Jr. of the DENR-Biodiversity Management Bureau.

“He refused to meet with his own customers, preferring a middleman. He would post his wares on Facebook and only accommodate his most frequent customers,” he said.

This made him quite unlike his fellow wildlife traders on Facebook, who were too often indiscreet with their transactions—“like taunting law enforcers,” Nuqui said.
Facebook deals

Nowadays, he added, most of their arrests were hinged on Facebook transactions.

“The demand for wildlife trading flourishes there because of the degree of anonymity [afforded to traders and buyers]. Online transactions are also quicker and more convenient,” he said.

He noted that Lim didn’t seem to have any physical shop and that all his captive-bred animals were sold online.