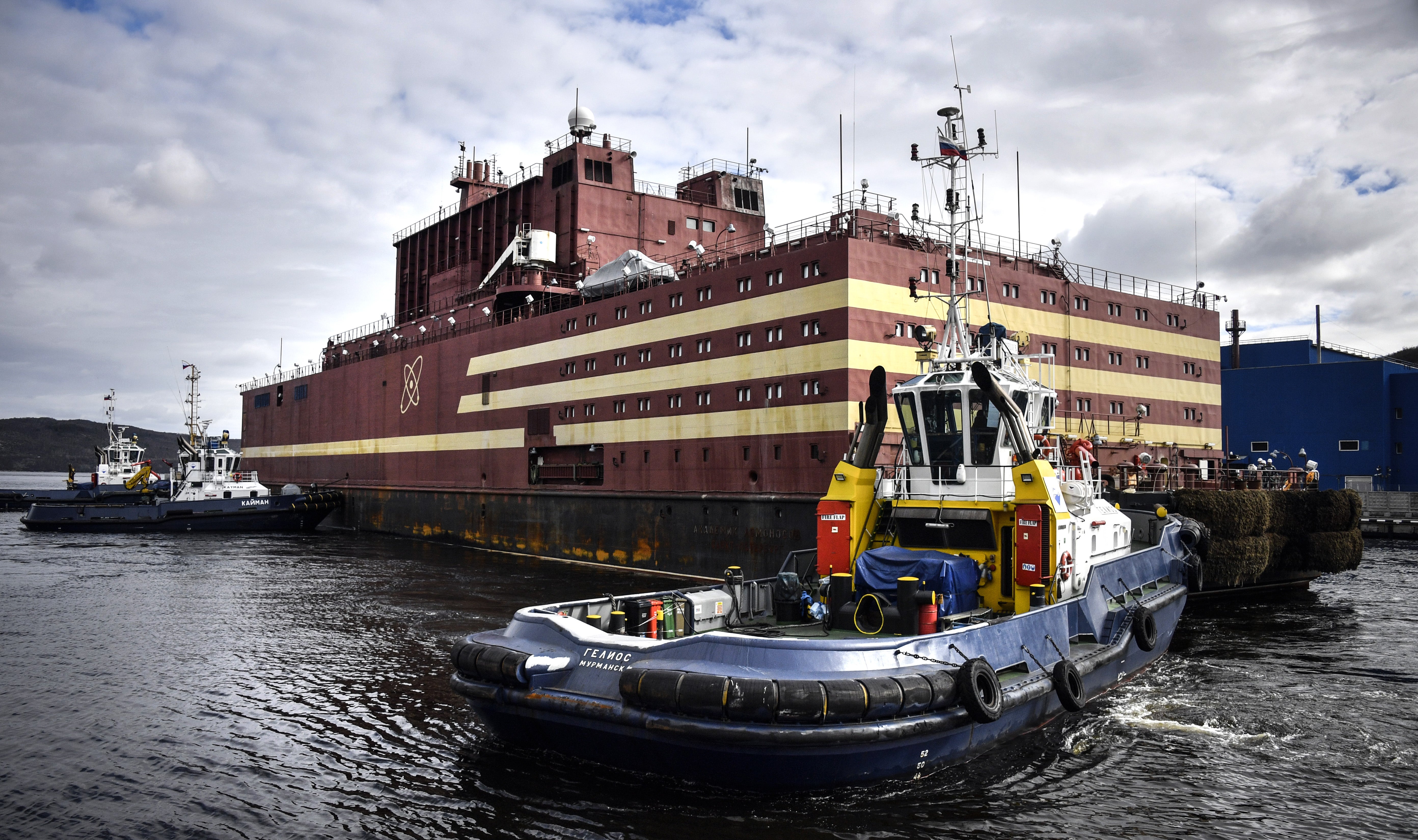 Floating power unit (FPU) Akademik Lomonosov is being towed to Atomflot moorage of the Russian northern port city of Murmansk on May 19, 2018. – Akademik Lomonosov, the worlds, so far, only nuclear floating power unit (FPU), has arrived to the port of Murmansk for being loaded with nuclear fuel before heading to eastern Siberia. Constructed by the state nuclear power firm Rosatom, the 144 by 30 metre (472 by 98 foot) ship holds two reactors with two 35 megawatt nuclear reactors that are similar to those used to power icebreaker ships. (Photo by Alexander NEMENOV / AFP)

MOSCOW — Russia will launch the world’s first floating nuclear reactor and send it on an epic journey across the Arctic on Friday, despite environmentalists warning of serious risks to the region.

Loaded with nuclear fuel, the Akademik Lomonosov will leave the Arctic port of Murmansk to begin its 5,000 kilometer (3,000-mile) voyage to northeastern Siberia.

Nuclear agency Rosatom says the reactor is a simpler alternative to building a conventional plant on ground that is frozen all year round, and it intends to sell such reactors abroad.

But environmental groups have long warned of the dangers of the project, dubbing it a potential “Chernobyl on ice” and a “nuclear Titanic.”

A deadly explosion this month at a military testing site in Russia’s far north, causing a radioactive surge, has prompted further concerns.

The reactor’s trip is expected to last between four and six weeks, depending on the weather conditions and the amount of ice on the way.

When it arrives in Pevek, a town of 5,000 in the Siberian region of Chukotka, it will replace a local nuclear plant and a closed coal plant.

It is due to go into operation by the end of year, mainly serving the region’s oil platforms as Russia develops the exploitation of hydrocarbons in the Arctic.

Rashid Alimov, the head of the energy sector of Greenpeace Russia, said environmental groups had been critical of the idea of a floating reactor since the 1990s.

“Any nuclear power plant produces radioactive waste and can have an accident, but Akademik Lomonosov is additionally vulnerable to storms,” he told AFP.

The float is towed by other vessels, making a collision during a storm more likely, he said.

Because Rosatom plans to store spent fuel onboard, Alimov said “any accident involving this fuel might have a serious impact on the fragile environment of the Arctic.”

He added that there is “no infrastructure for a nuclear clean up” in the region.

Global warming and melting ice has made the Northeast Passage — which connects the Atlantic Ocean to the Pacific along Russia’s northern coast — more accessible.

When AFP visited the Akademik Lomonosov in May 2018, it was a shabby brown colour. It has since been repainted in the red, white and blue of the Russian flag.

The vessel weighs 21,000 tons and has two reactors with a capacity of 35 megawatts each, close to that of those used by nuclear icebreakers.

Alimov said the project was a missed opportunity as Chukotka, a region larger than Texas populated by only 50,000 people, “has a huge potential for the development of wind energy.”

“A floating nuclear power plant is a too risky and too expensive way of producing electricity,” he said.

The nuclear industry, seeking to reinvent itself in a gloomy market, is developing smaller, cheaper reactors to attract new customers.

They follow the examples of submarines, icebreakers and aircraft carriers, which have long used nuclear power, and are intended for isolated areas with little infrastructure.  /muf