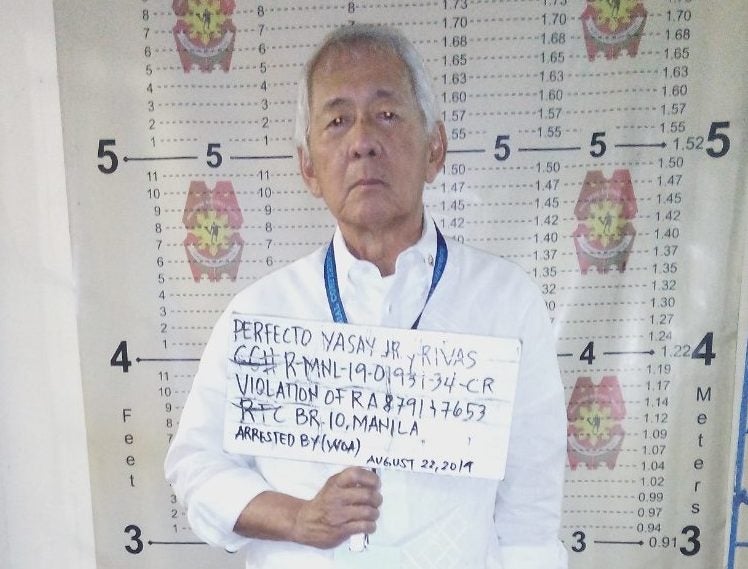 Yasay, the court said, had failed to report to the Bangko Sentral ng Pilipinas (BSP) a P350-million loan that he and other associates at Banco Filipino had granted a borrower.

The court order dated March 8, issued by Judge Danilo Leyva of the Manila Regional Trial Court (RTC) Branch 10, stated that Yasay was arrested for “violations of the provisions of… the New Central Bank Act.”

According to the report from the MPD Criminal Investigation and Detection Unit, a representative of the BSP appeared at the MPD headquarters on Thursday morning to seek police assistance in implementing the arrest order.

The police report said that Yasay and five other associates “being the responsible officers of Banco Filipino Savings and Mortgages Bank, conspiring and aiding each other directly part in securing from Banco Filipino a loan/credit… in the amount of P350 million for Tierrasud Inc., partly guaranteed and secured by real properties owned by Tropical Land Corp.”

“When the loan was granted, all accused failed to report such loan accommodation to the supervision of BSP,” the report added.

In a Facebook post, the 72-year-old Yasay said: “I am now being arrested from my house by police officers of Manila on the basis of a warrant of arrest issued by the RTC of Manila Branch 10 for criminal charges that were alleged(ly) committed by officials of Banco Filipino from 2003 to 2006, clearly appearing on the face of the Information filed by the prosecutor, when in truth and in fact I joined the Bank only in 2009. I am not posting bail until I am brought before the judge where I will question this abuse of process and travesty of justice.”