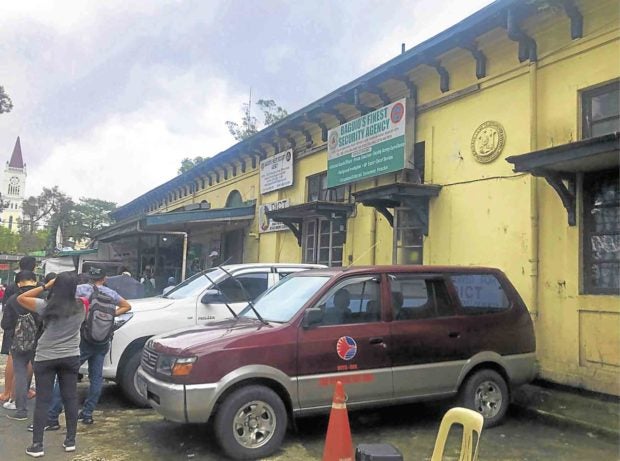 NEGLECTED  The walls of the Baguio post office are dirty, with its paint peeling, due to neglect and lack of funds for maintenance. The city government wants the building preserved and treated as a heritage structure. —VINCENT CABREZA

BAGUIO CITY—The almost century-old Baguio post office, now partitioned into food stalls and offices to raise revenue for its upkeep, should be treated as a heritage building by the Philippine Postal Corp. (PhilPost), Baguio Mayor Benjamin Magalong said on Tuesday.

Noting its “tremendous historical value,” Magalong said the post office at the heart of Session Road has “deteriorated and is dirty.”

Historical accounts say the original post office was put up in the 1920s, about two decades after the American colonial government designed and built Baguio.

But with its income unstable because of competition from quicker communications provided by the internet and smart telephones, the PhilPost had directed its post office here to maximize profits by renting out space instead.

Aside from the post office, the building hosts the Cordillera offices of the Department of Transportation and the Postal Bank, and several small eateries and “ukay-ukay” (used clothes) stores.

“A group of volunteers cleaned the area [which includes a park] on Aug. 17. The PhilPost couldn’t even clean its own area. But when we visited that property [on Tuesday], it was still dirty and so disorganized,” the mayor said.

A group of artists painted a mural along the steps of the post office park to beautify it. In the past few years, a German resident had been trimming the plants growing around the park for free.

In 2013, schoolchildren launched a letter-writing campaign to draw new business at the post office, hoping to spare it from commercialization.

The permits issued to some stores there would be canceled for violating sanitation rules and the structures that were illegally built would be demolished, Magalong said.

He said he would also notify the National Historical Commission of the Philippines, hoping to secure the authority to restore the old post office, one of the structures in the city selected for their historical and cultural value.

A group of Baguio historians has also included the post office among more than 70 structures or monuments in the city they want to be declared as heritage landmarks.

Magalong said many heritage sites have been neglected, citing the area on Governor Pack Road, where the first sessions of the Second Philippine Commission were held in 1904. The area is now being used as an eatery serving street food. —VINCENT CABREZA