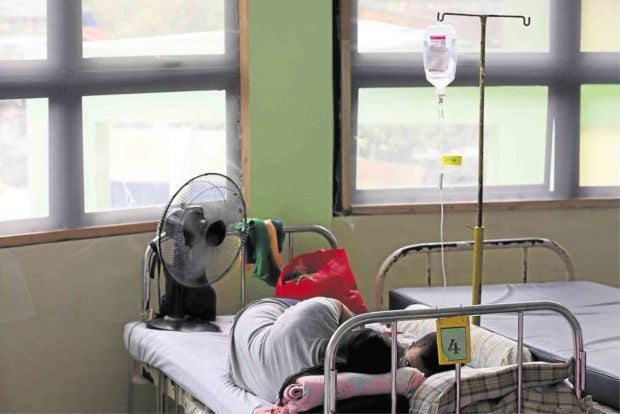 SICK BAY  A woman watches over her dengue-afflicted child in a hospital in Cavite province. —LYN RILLON

TUGUEGARAO CITY—A dengue outbreak has been declared in 11 towns in the Cagayan Valley region, prompting local health officials to recommend that these areas be placed under a state of calamity.

The Regional Epidemiology Surveillance Unit of the Department of Health (DOH) in Cagayan Valley noted an increase in the number of dengue cases in these areas in the last seven months.

The outbreak was noted in the towns of Alcala, Solana and Sto. Niño in Cagayan province; Quirino, Dinapigue, Divilacan, Tumauini and Roxas in Isabela province; and Aglipay, Saguday and Cabarroguis in Quirino province.

“We need to recommend the declaration of a red alert status and a state of calamity so that [local governments] can use their calamity funds to [address] dengue cases,” said Dante Balao, the Office of Civil Defense regional director.

The local governments of Lasam in Cagayan and of Roxas and Echague in Isabela earlier placed their towns under a state of calamity due to a surge in dengue cases, said Balao, who also chairs the regional disaster risk reduction and management council.

The municipal health office in Roxas has been recording 12 dengue cases every week since last month, up from the average of eight patients. In Echague, at least 319 dengue cases have been reported since January.

Dengue lanes have been set up in hospitals in the region and epidemiology surveillance units were activated in medical facilities to monitor dengue cases, said Dr. Leticia Cabrera, assistant regional director.

According to Dr. Rio Magpantay, the DOH director in Cagayan Valley, his office is conducting several antidengue activities, such as regular cleanup to search and destroy mosquito breeding sites in communities, to counter dengue infection. —VILLAMOR VISAYA JR.