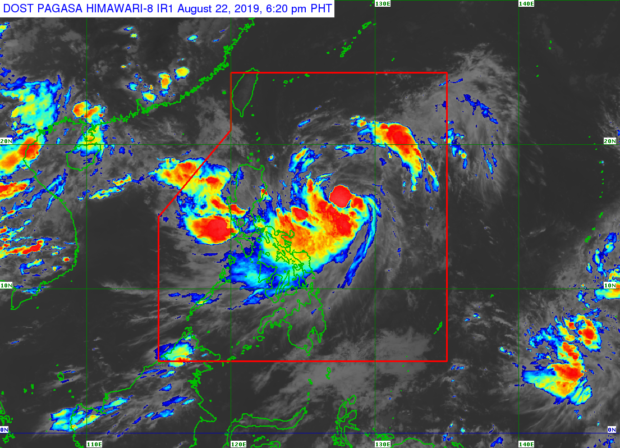 MANILA, Philippines — Tropical Storm Ineng slightly slowed down as it moves towards the northeastern part of the Philippines and may intensify into severe tropical storm within 24 hours, the state weather bureau said in its latest bulletin on Thursday.

The Philippine Atmospheric, Geophysical, and Astronomical Services Administration (Pagasa) said Ineng was last spotted 670 kilometers east of Casiguran, Aurora and was moving west-northwest at a slower pace – from 15 kilometers per hour (kph) to 10 kph.

Weather Specialist Ana Clauren, however, said Ineng is still not expected to make landfall and would likely leave the Philippine area of responsibility (PAR) by Saturday night or Sunday morning.

Pagasa said Ineng packs maximum sustained winds of 75 kph and gustiness of up to 90 kph, and affects the overall weather in most parts of the country especially Luzon, as its outer rainbands hover in the eastern portion of Southern Luzon and Visayas provinces.

Ineng also strengthens the southeast monsoon or habagat, bringing light to moderate and sometimes heavy rains on the western side of the country, according to Pagasa.

Pagasa also warned of flash floods and landslides in Catanduanes province due to light to moderate and occasional heavy rains brought by Ineng.

Sea travel remained risky over the eastern seaboards of Central and Southern Luzon, and of Visayas, Pagasa added. /kga