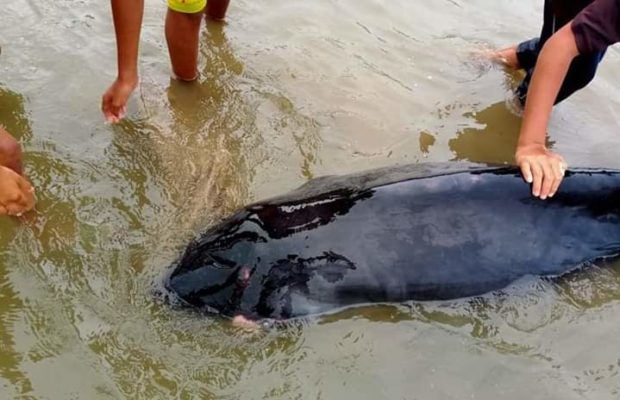 A Pygmy sperm whale (Kogia breviceps) was “heavily emaciated” and died at Del Gallego in Camarines Sur. Photo from BFAR

LEGAZPI CITY – Two whales of different species were found dead on the shores of Masbate and Camarines Sur on Wednesday and Thursday, the Bureau of Fisheries and Aquatic Resources (BFAR) said.

Nonie Enolva, BFAR Bicol spokesperson, said one of the whales was abnormally thin, while the other had wounds on its dorsal fins.

Enolva said the pygmy sperm whale, the third stranded in Del Gallego and the nearby town Ragay since 2013, did not swallow any plastic but died due to poor nutrition.

“It could not have been able to hunt for food or it was possibly suffering from a disease,” Enolva told the Inquirer.

Pygmy sperm whales are listed in the conservation treaty Convention on International Trade in Endangered Species of Wild Fauna and Flora’s Appendix II, meaning they might become threatened if no protection is done.

In Batuan town, a short-finned pilot whale (Globicephala macrorhynchus) was already dead when reports from the Philippine Coast Guard Masbate reached BFAR in Masbate at 7 a.m. on Wednesday. 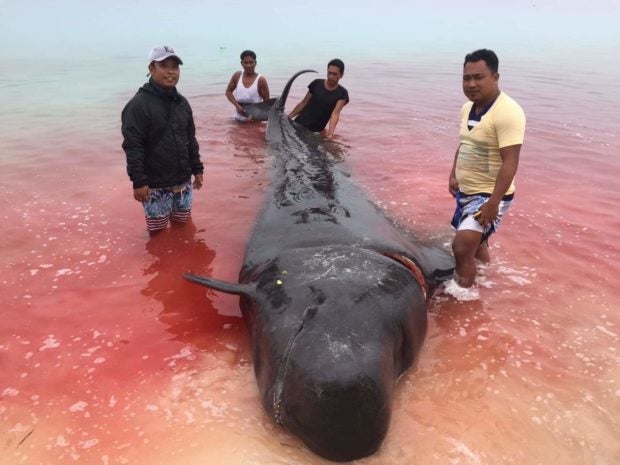 The short-finned pilot whale (Globicepahala macrorhynchus) that was found dead in the shores of Batuan, Masbate had wounds on its body, possibly caused by a rope. Photo from BFAR

Enolva said the 4.91-meter mammal was found at Sitio Bongsanglay in Gibraltar village with a rope around its dorsal fin and wounds on its tail, which possibly caused its death.

Short-finned pilot whales are also in the Appendix II list.

In recent years, no dolphin and whale butchering were recorded in Batuan, but the fisherfolk must be reminded of the proper disposal of their fishing equipment, Enolva said.

“We enjoin our fishers not to leave their discarded nets and ropes in the seas. These contribute to net entanglement of our marine mammals and other fisheries resources in the oceans,” Enolva added.

“They should be bringing [the discarded nets] to the local material recovery facility so as not to add to the marine debris polluting the sea or to the number of wildlife deaths.” /lzb