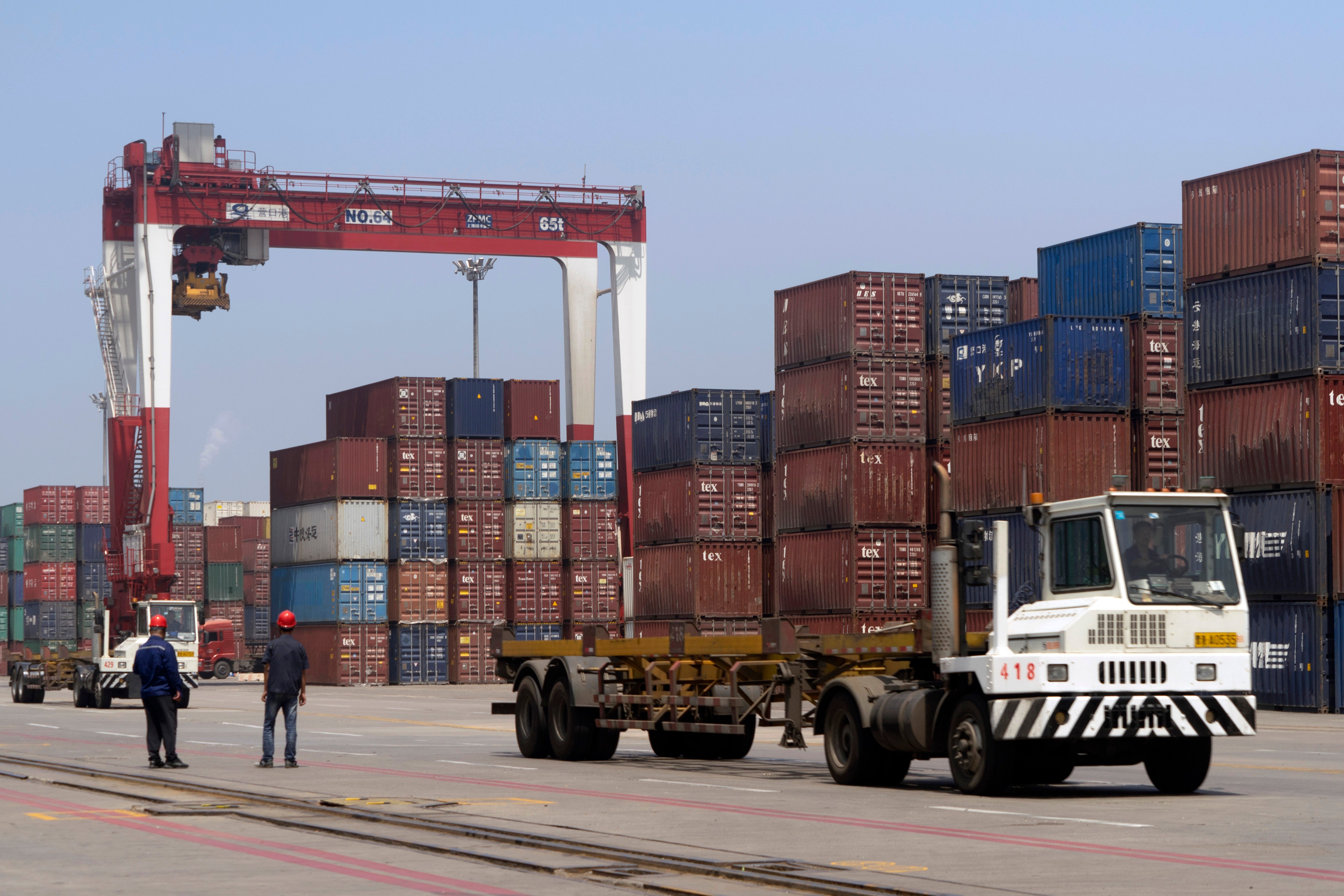 In this July 24, 2019, photo, workers watch as a truck passes by stacks of shipping containers at a port in Yingkou in northeastern China’s Liaoning Province. Authorities in China’s rust-belt region are looking for support for its revival from Beijing’s multibillion-dollar initiative to build ports, railways and other projects abroad. (AP Photo/Olivia Zhang)

YINGKOU, China  — From Thailand to Kenya, trains run on tracks from steel mills in China’s northeast, a rust-belt region that is trying to capitalize on a multibillion-dollar national initiative to build ports, railways and other projects abroad.

Announced in 2012, the Belt and Road Initiative is helping to boost demand from developing countries at a time when China’s economy is slowing and exporters face U.S. tariff hikes in a war over trade and technology.

It calls for building railways, power plants and other infrastructure across an arc of more than 60 countries from the South Pacific through Asia to Europe and Africa. Estimates of the total cost of planned projects run as high as $6 trillion, though it’s unclear whether all will be built.

Ansteel, in Liaoning province, has won bids to supply steel for railways in Thailand and Kenya. In Pakistan, the company has delivered 8,000 tons of track for the $1.6 billion Orange Line of the Lahore Metro.

“Where the Belt and Road construction goes, our railway tracks will follow,” said Wang Jun, manager of Ansteel’s Bayuquan production base in Yingkou.

State-owned Ansteel is among dozens of suppliers of steel, industrial equipment and other goods in the region that are pinning their export hopes on Chinese building projects.

Liaoning was left behind as market-style economic reforms transformed China’s east coast and southeast into the world’s factory.

Most Belt and Road projects are financed by Chinese bank loans and built by Chinese contractors using technology, steel and other materials from China.

The government releases no information on the number of projects or the scale of investment.

A total of 306 projects are under construction in 58 countries, according to Fitch Solutions. It said the cost for those built so far is $102 billion and total projected spending on all energy, transportation and utility projects announced to date is $766 billion, which includes possible investment from Chinese and foreign companies as well as Chinese loans.

Including other projects, a total of less than $200 billion had been spent through the end of 2018, according to Derek Scissors at the American Enterprise Institute in Washington.

Liaoning’s exports to Belt and Road countries rose 20.3% in the first quarter of 2019 from a year earlier, according to the provincial Commerce Department.

Sales to Malaysia and the United Arab Emirates doubled, said the department’s deputy director, He Rui.

President Donald Trump’s tariff hikes have dented Liaoning’s exports, but the United States accounts for only 10% of its foreign sales of car parts, refined oil and farm goods, said He.

Ansteel built the Bayuquan base to sell to Southeast Asia, Japan and South Korea, according to Wang.

Many host governments want more building materials to come from local suppliers, but Belt and Road still is an export opportunity for Chinese suppliers of high-speed rail, power plant and other technology.

Huarui has contracts in 15 Belt and Road countries, including Bangladesh and Pakistan, said its vice president, Wei Xufeng. Wei said those account for 60% of its exports and 20% of total revenue.

Local leaders are promoting Dalian in Liaoning, the northeast’s busiest port, as a Belt and Road hub to connect shippers with East Asia and Europe.

Trains on one of six routes that link Dalian with Russia carry Samsung electronic products and components made by other washing machine and television manufacturers. In 2017, the line carried a total of 4,500 containers of goods worth $270 million.

“In the future, we aim to sell more with high added value,” said Xia. “We think these are suitable for China-Europe cargo trains.”

The port can move Japanese and South Korean autos to Kazakhstan or other Central Asian countries by train, said Ding Hao, manager of Dalian Car Wharf.

“Belt and Road will bring us significant benefits, but we need some time to see it,” said Ding.

Still, Belt and Road faces hurdles that might trip up hopes for boosting Chinese exports.

Governments including Thailand, Tanzania, Sri Lanka and Nepal have scaled back or renegotiated projects they said were too costly or gave too little work to local contractors.

Ansteel’s experiences reflect the potential volatility of exports based on the ebb and flow of Chinese-led construction projects. It reported 2018 exports of 5.8 billion RMB ($840 million), or about 5.5% of its total revenue, down by 10% from 2017.

The northeast also is targeted in a multi-year government effort to shrink the bloated state-owned steel industry in hopes of making producers more efficient and profitable.

Policies aimed at reviving the northeast were unveiled by Beijing in 2003, but the region is struggling with pollution and an aging population.

In 2016, Liaoning’s economy shrank by 2.5%. Its output was less than one-third that of Guangdong province, the manufacturing powerhouse that abuts Hong Kong.

The total population of Liaoning and the two other provinces in China’s northeast — Jilin and Heilongjiang — declined by 380,000 people last year as migrants left for other regions in search of work.  /muf