2 minors arrested for stealing from Korean, Syrian nationals in Manila 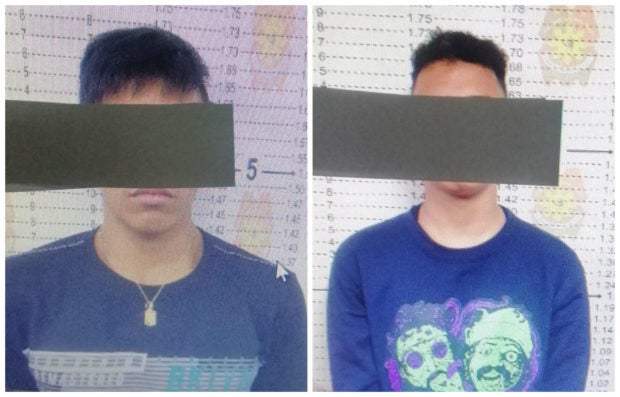 Mugshots of 16-year-old and 17-year-old boys arrested for allegedly stealing about P100,000 worth of items from two foreigners in Manila. Photo from MPD PIO

MANILA, Philippines — Two minors were taken under police custody after allegedly snatching the cellphone and wallet of two foreigners in Ermita, Manila on Wednesday night.

A report from Ermita police station disclosed that the suspects in the robbery are boys aged 16 years old and 17 years old.

Initial investigation showed that Aljaroc was walking along Mabini Street corner Salas Street when the two suspects riding a motorcycle without plate number appeared from behind and stole his cellphone worth P85,000 at around 10 p.m.

As the minors tried to escape, Aljaroc got into his car and followed the suspects along J. Bocobo Street.

This prompted Aljaroc to hit the suspects, causing the minors to fall off the motorcycle.

One of the suspects managed to run away while Aljaroc brought the other suspect to Ermita police station.

Members of Remedios police community precinct conducted a follow-up operation and apprehended the other teenager.

The minors were turned over to the Manila Police District’s Women and Children’s Police Desk.

He also noted that they received initial information that the suspects’ motorcycle was used in previous robbery cases.