Turtle Islands: Hundreds of nautical miles away from justice

TURTLE ISLANDS, Tawi-Tawi—They came in the dead of night and pulled off the first heist on Baguan Island this year. The thieves, possibly armed, quietly left onboard a boat taking about 600 pieces of green turtle eggs from this protected wildlife sanctuary 1,000 kilometers southwest of Manila. 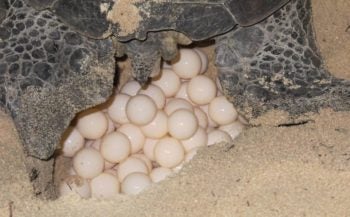 “They ransacked six nests,” said Orlan Maliwanag, Sea Turtle Corridor staff of the nongovernment Conservation International-Philippines. A nest can contain from 40 to 140 eggs of the endangered sea animal.

For CI-Philippines, every egg is essential for the global bid to reverse a steady population decline of green turtles (Chelonia mydas). There is no clear estimate how many are left in the ocean but the International Union for the Conservation of Nature said their number could have plummeted by more than 50 percent over the past decade.

Human encroachment and destruction of habitat, meat and egg trade, domestic and industrial pollution and commercial fishing are among the major threats to the species’ existence.

In Turtle Islands, eggs theft is common. But in this Tawi-Tawi municipality, most, if not all, wildlife crimes are unsolved or simply settled out of court.

Turtle Islands police chief Senior Insp. Norlito Mata attributed this to a lack of prosecutor’s office and court in the municipality. On Taganak Island, the seat of municipal government, there is no detention facility.

Environmental lawyer Ipat Luna blames the town’s outlying location. “Its geographic distance to any court is the main issue. Hundreds of thousands in fuel alone would be spent to take someone who is arrested back to Bongao to prosecute,” she said.

Bringing the case to court in the Tawi-Tawi capital of Bongao would require authorities to ferry suspected wildlife offenders on board a passenger vessel, whose trips are few and far between. It takes about 14 hours to reach Bongao from Taganak.

Egg poaching is just one of the most common environmental offenses in Turtle Islands. Illegal fishing abounds, posing grave threats to its already fragile marine ecology. 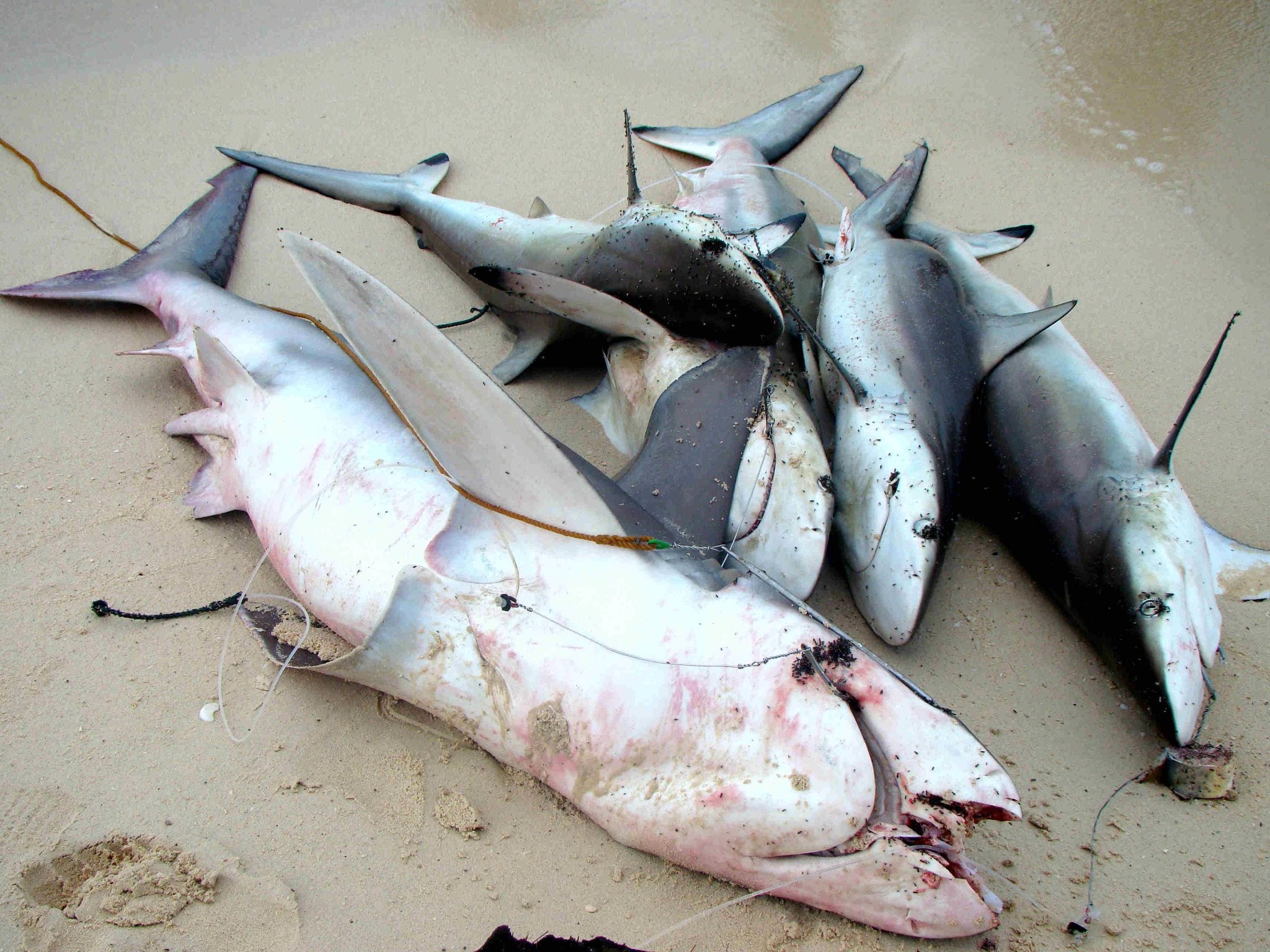 In the municipality of Turtle Islands, sharks are slaughtered every day for their fins. (Dennis Maliwanag)

From 2005 to 2009, the Philippine Navy recorded 571 cases of illegal fishing—both by local and foreign fishermen—in the municipal waters, according to its confidential report obtained by INQUIRER.net. Law enforcers feel helpless. “We don’t even have a single patrol boat here,” said Turtle Islands Coast Guard chief Petty Officer 2 Benny Olivarez.

The Philippine Navy has an outpost in Taganak. But like the police and the Coast Guard, it too has no vessel to chase poachers and illegal fishers. A Navy ship from Zamboanga City and Bongao conducts routine patrol only once a month, said officials.

Turtle Islands, where the Philippines shares a porous border with Malaysia, has a combined land and sea area of 138,357 hectares. Its six islands, which have an aggregate area of 308 hectares, are at least nine to over 28 nautical miles apart.

Most tampasak (Malaysian term for fishing boat) used for illegal fishing in the protected waters of Turtle Islands come from the Sabah city of Sandakan, about 21 nautical miles from Taganak.

The Department of Environment and Natural Resources’ Pawikan Conservation Project has reported that around 100 tampasak operate daily in the Turtle Islands Wildlife Sanctuary.

“These boats drag large nets along the bottom, catching whatever gets in their way. Sometimes, sea turtles are trapped in the nets. Since turtles are air-breathing reptiles, they drown if they are trapped for several hours,” the PCP said.

On July 17, police caught a Malaysian-registered fishing boat off Baguan Island. It was carrying 13 fishermen and sacks of homemade dynamite. The men were held in police custody in Taganak and Mata said they would be charged for dynamite fishing, a violation of Republic Act No. 8550.

The Malaysian media reported the arrest and Sabah authorities vowed to investigate the incident, including a claim the 13 were kidnapped and being held in Taganak.

Four days later, all the illegal fishing suspects were freed. Turtle Islands authorities said they were not pressing charges. “In doing so, perhaps the relations between Sandakan and Taganak will be better again,” Mata said.

Turtle Islands officials are too careful not to hurt the town’s special and historical ties with Sabah, where the Philippines’ dormant territorial claim had in several occasions sparked diplomatic tensions. 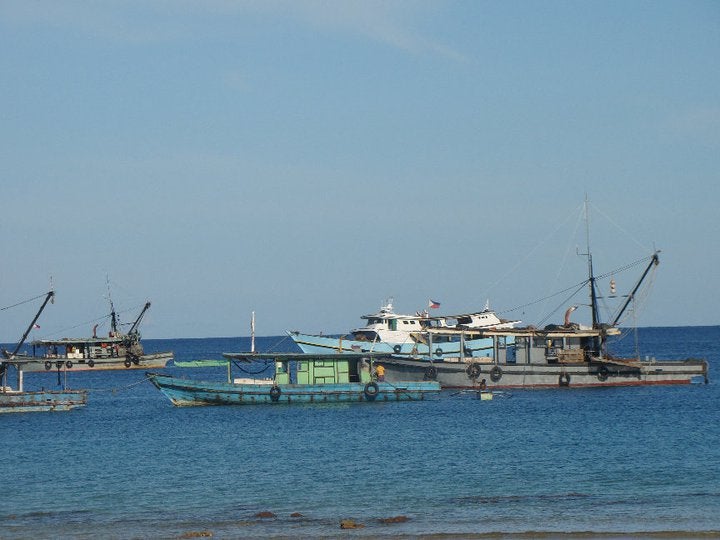 The more than 6,000 population of this fishing town rely largely on Sandakan market to sell their daily catch. Islanders who are sick need not obtain foreign travel documents but only a special municipal permit to seek medical treatment in Sabah. The town’s health center has one midwife and a nurse, but no doctor.

But Sabah also serves as a hub for illegal turtle eggs trade.

In Kota Kinabalu City’s underground market, six turtle eggs are sold at 10 Malaysian ringgit, or about P23.40 a piece. A woman vendor, who at first was hesitant to admit she was selling eggs, disclosed that most of her clients are from Brunei. 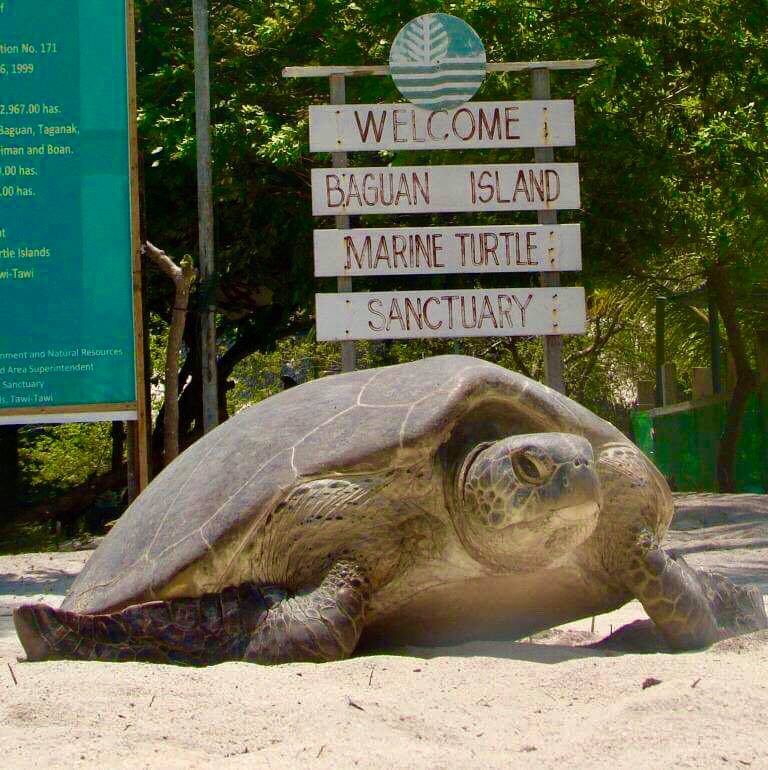 A green turtle crawls back into the sea after laying eggs on the shore of Baguan Island. (Orlando Maliwanag)

Gathering of turtle eggs is still allowed in the Philippine part of Turtle Islands. A sharing scheme of 60 percent for consumption and selling and 40 percent for conservation is being implemented on the islands, except on Baguan, a strictly “no-take” zone in the six-island municipality.

The scheme is seen by the Philippine government as a temporary measure to regulating eggs gathering, said Maliwanag, adding that there is a need to strike a delicate balance between local culinary tradition and conservation.

In time, environment officials will enforce a “no-take” policy in the entire town, he said. “But the local government requires that alternative livelihood projects must be in place before the total ban on egg collection is fully enforced.”

Unlike the rest of the islands, the 29.1-hectare Baguan Island is off limits to human habitation.

It is in Baguan where the biggest number of nesting turtles is observed in the entire municipality, the DENR said. The bell-shaped island is the 11th major nesting site of marine turtles in the world.

Turtle Islands produces up to two million turtle eggs annually, according to the DENR’s Protected Areas and Wildlife Bureau. In 2009, sea turtles laid about one million eggs on the shores of Baguan alone, said Frasad Yusop, one of the four wildlife sanctuary wardens stationed on the island.

“It is important that armed forces are stationed on the island,” said Maliwanag. “Poachers are also normally armed.”

“Arresting teams onsite lack training and experience in evidence gathering and preservation so the few times it gets to Bongao for prosecution, the evidence is thin or has been thrown overboard in the long trip,” she said.

Establishing a court and a prosecutor’s office in Taganak is necessary, especially during nesting season, Luna said. “The ‘Justice on Wheels’ project of the Supreme Court may be applicable as ‘Justice on Sails,’ but only if there are already cases and the dockets are full. Right now, no cases are filed at all due to the distance,” she said.

Luna said the high tribunal has to recognize that the absence of cases or inability to file “is not an indication of lack of violations and unclogging dockets are not the only indicators of justice denied.”

“Taganak and other remote areas, where environmental law violations are rampant, need a way to deliver justice despite being a day of travel and hundreds of thousands in fuel cost away from any court.” 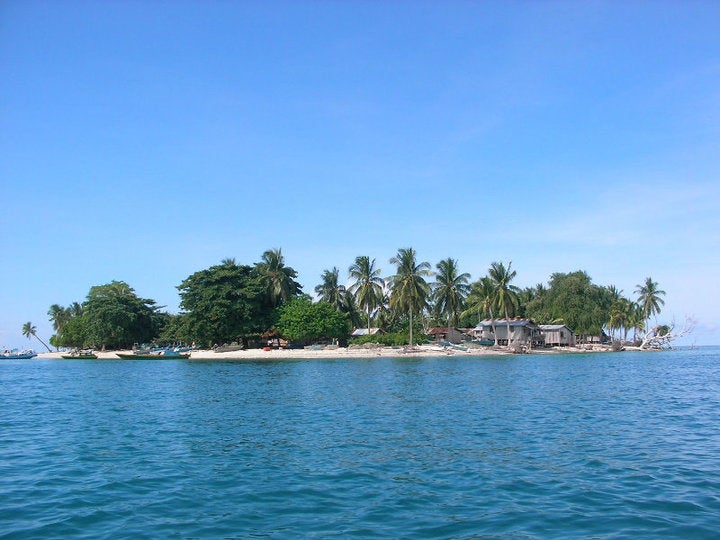 Lihiman Island, one of six islands in the protected Turtle Islands, south of the Philippines, is one of the nesting areas of green and hawksbill turtles. (Leti Boniol)