‘As opposition thinned out, Ninoy was consistent’ 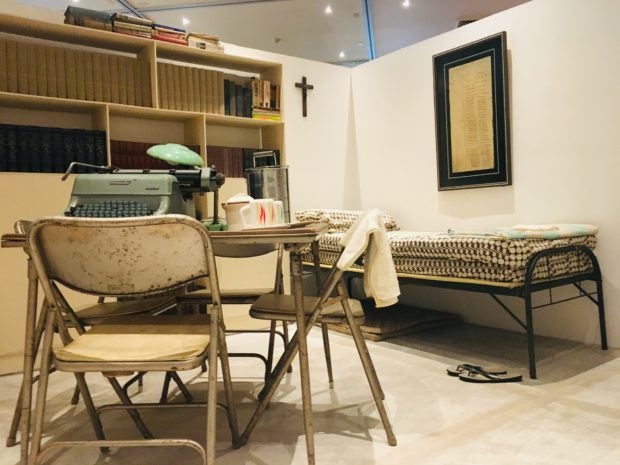 SOLITARY CONFINEMENT. For nearly 8 years, Sen. Benigno S. Aquino was locked alone in this jail in Fort Bonifacio for trumped up charges. A replica stands inside the Aquino Museum in Tarlac City. PHOTO BY TONETTE T. OREJAS

TARLAC CITY, Tarlac, Philippines — Two exhibits stand out among many visuals in the Aquino Museum here.

The first shows a replica of a prison cell where the late Sen. Benigno “Ninoy” Aquino Jr. was locked up alone for nearly eight years at Fort Bonifacio in Taguig (then a municipality in Rizal province), after his arrest on Sept. 23, 1972, or two days after then President Ferdinand Marcos imposed martial law.

Far down the gallery is his glass-encased bloodied shirt, which he wore when an assassin’s bullet silenced him as he returned from exile in the United States on Aug. 21, 1983.

This image of violence, frozen in time, is surrounded by three iconic photographs of a large protest march seeking justice for Aquino and other victims of political repression, and a mammoth crowd that accompanied his flag-draped coffin from Santo Domingo Church in Quezon City to his final resting place at Manila Memorial Park in Parañaque City.

To the young, uninitiated, forgetful or those who chose not to remember, these images from a pivotal chapter in Philippine history serve as reminders of how martial law was used as a license by Marcos to violate rights guaranteed in the Constitution, and that fighting for freedom in that time entailed dying for it.

Opened in 2001, the museum enshrined the historical memorabilia of Aquino and his wife, the late President Corazon Aquino. It is also the Ninoy and Cory Foundation’s way of sharing “the story of the couple’s sacrifice and love for the Filipino people,” said Rapa Lopa, nephew of President Aquino.

“Ninoy was the face, the voice, the light of the anti-Marcos movement,” recalled Rodolfo Salas, aka Kumander Bilog.

Salas had various encounters with Aquino as a student leader, head of the New People’s Army since 1976 and chair of the new Communist Party of the Philippines (CPP) since 1977 until he was arrested in September 1986.

“The political opposition thinned out, but Ninoy was consistent. He was fighting Marcos even in prison,” said Salas.

He described Aquino as an “ally” of the national democratic movement, not a CPP member as claimed by the Marcos regime, which charged him with violation of the antisubversion law and had him tried in a military court despite his being a civilian.

The Aquino assassination, whose 36th anniversary is being commemorated on Wednesday, “reminded how we lost our families and friends especially the youth. It also showed us how to live,” said former Pampanga Rep. Emigdio Lingad, son of Liberal Party stalwart Jose B. Lingad who was among the opposition leaders murdered in 1980.

“Never again” is the stance of Lingad, now 66, on martial law.

“We only need to read and reflect the lessons well,” he said when asked of the danger signs under President Duterte’s time.

The antimartial-law pitch in the museum appears to resonate more now because Mr. Duterte often speaks about his plan to impose the emergency rule nationwide or expand it from several areas where it is in effect.

His officials also plan to revive the antisubversion law that was enacted in 1957 to stop the spread of communism globally.

Salas found it “dangerous” that the President had appointed many retired military and police generals in what should be a civilian government. “Rightist” is how he called Mr. Duterte.

The museum makes no dig at other Philippine presidents, except Marcos, because of, in the late senator’s own words, his “totalitarian rule.”

“If not for Ninoy, we would remain a nation of cowards to be ruled by one dictator after another or as slaves of whatever kind,” Lingad said.

“We must be aware of the fact that the dark chapter in history will repeat itself when power falls in the hands of one man or dynasty or a party of men or of a foreign power,” he said.