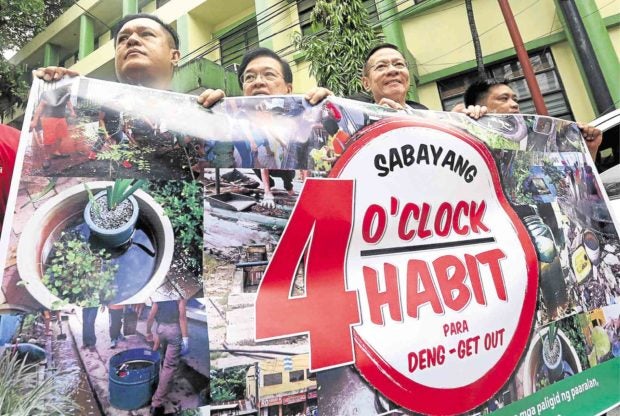 SEARCH AND DESTROY The Department of Health this month has declared a national dengue epidemic after a surge in cases of the mosquito-borne disease. Health Secretary Francisco Duque III (second from right) has urged local governments and health officials to lead regular cleanup activities in communities to search and destroy breeding sites of disease-carrying mosquitoes. MARIANNE BERMUDEZ

MARIVELES, Bataan, Philippines — More than 100 Chinese workers in a coal-fired power plant here have been afflicted with the dengue virus, a health official said.

According to Dr. Rosanna Buccahan, Bataan provincial health officer, the Chinese were employees of GNPower Ltd., which operates the 600-megawatt power plant in the coastal village of Alas-asin here.

She said 94 of the Chinese workers contracted the virus at their barracks inside the plant from May to July. The remaining 24 cases were recorded this month and most of them were taken to Pampanga Medical Specialist Hospital in Guagua town, Pampanga province, she said.

About 400 Chinese, mostly construction workers, have been employed by GNPower.

Health and sanitation personnel from the local government inspected the premises of GNPower and found several breeding grounds of mosquitoes in July and August.

“After the inspections, we declared a dengue outbreak inside the power plant,” Buccahan said.

She said they carried out three cycles of fogging operation to destroy the breeding grounds that were found near the workers’ barracks.

“These Chinese workers have already recovered and we asked their company to practice preemptive measures to avoid new dengue cases [inside the plant],” Buccahan said.

Bataan Board Member Godofredo Galicia Jr., chair of the provincial board’s committee on health, said local health officials should monitor the dengue cases in this town.

“Dengue is a sanitation problem … a search and destroy campaign should be done in all Bataan municipalities,” he said.

Apart from the Chinese workers, 278 other dengue cases have been reported in this town this year, he said.

Records from the provincial health office showed that 989 dengue cases had been recorded in the province from January to August this year.

Buccahan said the number was 21 percent lower than the 1,252 dengue cases recorded in the same period last year.

In Central Luzon, 10,637 people were afflicted with the dengue virus that killed 39 others, mostly children, since January, a report from the Department of Health (DOH) regional epidemiology surveillance unit showed.

Of the 39 deaths, 10 were in Nueva Ecija, nine in Tarlac, six each in Aurora and Bulacan, four in Zambales, three in Pampanga and one in Bataan.

Dengue fever cases rapidly increase during the rainy months as breeding grounds of mosquitoes abound, such as in stagnant water containers and discarded tires.

In Northern Mindanao, at least 795 new dengue cases were recorded in various hospitals across the region over the weekend, health officials said on Tuesday.

At least 20 percent of cases in the region were reported in Cagayan de Oro City where 10 villages had been placed under a state of calamity because of the increase in dengue infections.

The Cagayan de Oro government on Tuesday relaunched its “Oplan Kontra Dengue,” tapping all barangay officials to lead in the cleanup of backyards and drainage canals in their communities.

The Cagayan de Oro health office said dengue cases in the city rose to 1,964 this week from 1,780 cases last week. Nine dengue-related deaths had been recorded this year, up from six in the same period last year.

“There are still no signs that the dengue cases are going down. We are still in the danger zone,” Mendoza said.—Reports from Greg Refraccion and Froilan Gallardo