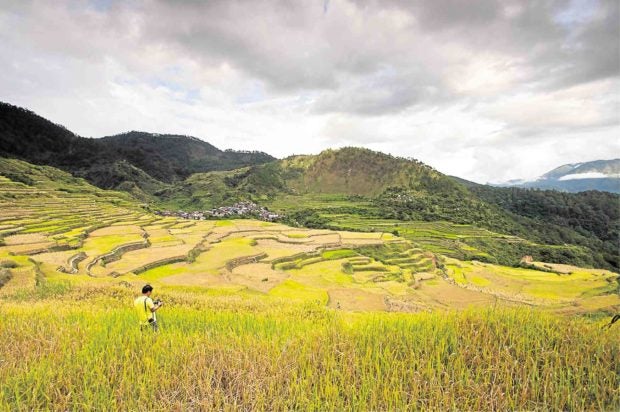 MOUNTAIN FARMS Rice lands and vegetable farms in the Cordillera have been carved out of mountainsides, with many of these slowly expanding and encroaching on forests. —RICHARD BALONGLONG

BAGUIO CITY, Benguet, Philippines — Communities and farmlands now occupy 300,000 hectares of Cordillera forests, indicating that 16 percent of the region’s forest reservations need to be reclassified as agriculture lands that can be titled, according to the Department of Environment and Natural Resources (DENR).

Only 15 percent (282,543 ha) of the region’s 1.8 million-ha area is alienable and disposable because the forestry code prohibits lands with 18-percent slopes from being inhabited and developed.

“We need to improve [Cordillera] land tenure because these areas have been occupied for many years but are still classified as forestlands,” said Ralph Pablo, DENR director in the Cordillera.

Pablo said the proposed reclassification had been transmitted to Congress.

In spite of the forest law, government agencies have issued 146,951 land patents since 2010, 63,861 of which have been granted for forest dwellers. The rest are agricultural patents for farmlands within the forests.

In 2018, 3,093 more residential free patents were issued over 93.36 ha of settlements, while 109 certificates of land ownership award for 196.35 ha of farmlands inside the forests were released through the Comprehensive Agrarian Reform Program.

Pablo said patents were also being released to protect government reservations, most of which were located in Baguio City, from informal settlers.

In 2015, 158 patents were issued to reservations controlled by the police, the Supreme Court and the Department of Public Works and Highways. —Karlston Lapniten