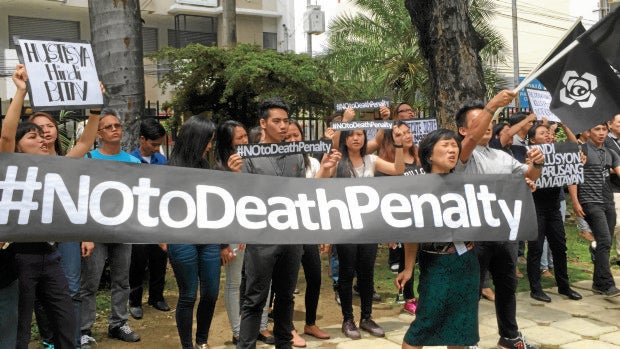 ZAMBOANGA PROTEST Teachers and students of Ateneo de Zamboanga University in Zamboanga City join their colleagues in Manila in condemning the approval of the death penalty bill on third and final reading by the House of Representatives. —JULIE S. ALIPALA

A staunch opponent of the death penalty who had in the past successfully blocked legislation restoring capital punishment expressed doubt that devout allies of President Rodrigo Duterte, who are senators now, have fully studied the implications of what he said was “judicial murder.”

Go was Duterte’s long-time and most trusted aide who continues to keep the President company at public events while Dela Rosa was the President’s first chief of the Philippine National Police (PNP). Their victories at the Senate race had been attributed largely to the dogged endorsement by Duterte.

Both Go and Dela Rosa were among the first to publicly declare their support for new legislation that would bring life back to the death penalty with Go seeking to add plunder as a capital offense and Dela Rosa expressing preference for death by musketry, better if televised or watched by the public, as a form of execution similar to the way national hero Jose Rizal was martyred by Spanish colonizers.

The two, however, have not expounded on the benefits of death penalty although fully supportive of Duterte’s conviction that it was a major deterrent to crime. This has raised questions over whether the two new senators have fully studied Duterte’s pet proposal.

“I doubt it,” was Saguisag’s reply to an e-mail query by INQUIRER.net.

“They have this image—when asked by Digong to jump to a conclusion from a high rise, they’d just ask—from what floor, Sir?” said Saguisag, referring to Go and Dela Rosa and using one of Duterte’s nicknames.

In his repeated cry for death to criminals, Duterte also appeared to just rely on his personal belief that criminality required an “eye for an eye, a tooth for a tooth” solution. At several of his impromptu speeches, the President went into gory details of crimes committed by druggies, like disemboweling their victims, to stress the need for capital punishment.

But Saguisag, repeating argument often made against the death penalty as a crime deterrent, said no matter how severe the penalty is, criminals won’t hesitate to strike if they knew that they were likely to get away with it.

“Severity of penalty doesn’t deter, only certain and swiftness (of getting caught) may,” he said in e-mail replies to INQUIRER.net.

“The supermarket theory of criminal law is that a criminal carries a copy of the penal code in his pocket and examines what he can afford and what he cannot,” said Saguisag. “It doesn’t work that way in the real world.”

In an INQUIRER.net report, Go was quoted as saying he wanted plunder listed, too, as a crime punishable by death.

This was his reasoning, blurted out in Filipino, according to the report: “Why leave out plunder? That’s related. I mean drugs are addictive but plunder is also addictive, addiction to money. Let’s deal with it at the same time so it’s just one simultaneous approval.”

Go’s theory about corruption as a form of addiction, too, would sound familiar some three months later at the State of the Nation Address (Sona) of Go’s boss, Duterte, on July 22.

In that Sona, Duterte connected corruption and the drug trade saying “drugs will not be crushed unless we continue to eliminate the corruption that allows this social monster to survive.”

In March 2019 about two months before the midterm elections in May, Go released a statement also explaining his conviction that the death penalty would deter crimes.

He cited the killing and face mutilation in Lapu-Lapu City, Cebu province of Grace Silawan, a Grade 9 student whose naked body was found at a vacant lot. The skin on half of her face had been peeled off.

“I believe that the death penalty is an effective deterrent against heinous crimes, like the merciless and demonic-like killing and skinning of the face of Christine Lee Silawan of Cebu,” his statement said.

The brutality of the crime, said Go, was a “stark reminder of the necessity for the revival of capital punishment for heinous crimes.”

“I am 100 percent in favor of imposing the death penalty on criminals proven to have committed heinous crimes, especially those involving illegal drugs,” Go said, according to a report of the Philippine News Agency.

A keyword to Go’s statement was “proven” which data cited by the John J. Carroll Institute on Church and Social Issues (JJCICSI) showed was something that the Philippine judicial system seemed to have extreme difficulty in achieving.

Dela Rosa, who brought his novel “tokhang (knock and plead)” tack against drug suspects from Davao City to the Philippine National Police (PNP), said his win in the Senate race (he was top 10) showed that people, or at least the millions who voted for him, supported the death penalty.

“I have no other campaign promise or platform when I ran for senator except for the death penalty for drug trafficking. I have to do that,” Dela Rosa told reporters at an event in Camp Crame, the PNP headquarters.

“The people voted for me and I won with that platform,” he said.

Dela Rosa said he preferred executions to be made in public by firing squad, or musketry, the same way that Spanish colonizers infamously ended the life of Philippine national hero Jose Rizal at Bagumbayan, now Luneta, for subversion.

According to Dela Rosa’s logic, giving the entire nation a front seat view of the execution would scare would-be criminals, particularly drug traffickers, and have a horrifying deterrent effect.

“If you want, we can have it through firing squad in a plaza covered live by media so that the people will be reminded not to be lured into this activity,” he said in Filipino in an INQUIRER.net report.

“Not for all crimes. As I have said, small-time drug peddlers, pushers or users won’t be included,” the former PNP chief said.

“My version of death penalty is for drug trafficking, those who flood the country with illegal drugs,” he said.

“There should be a ceiling. For example, if you are caught in possession of at least 1 kilo of shabu, you are classified as drug trafficker. It can be like that,” he added.

Saguisag, in the e-mail interview with INQUIRER.net, said he believed that the popularity of Duterte could rub off on his quest to restore the death penalty. Duterte had an 80 percent popularity rating halfway into his term, according to recent polling results.

Saguisag, however, stood by his belief that death penalty would impact only on the poor because of a judicial system which moves so slowly in dispensing justice and where cases taking decades to resolve is the norm rather than the exception.

Saguisag recalled handling a case for several wrongly charged young men which took a court 25 years to decide on, keeping the accused, who would be found innocent after 25 years, detained for the same number of years.

He said while the odds are in favor of the death penalty returning, he would appeal to other senators “not to be anti-poor and have a higher regard for human life.”

“Only the very poor will get it from the wealthy and powerful lawmakers and policymakers,” Saguisag said.

“We can just hope and pray that we get enough senators who will agree that what the Lord giveth, only He taketh away,” he said, partly quoting a biblical passage.

“We ought not to play God and decide who among the poor will live and who will die,” Saguisag said.

Duterte is pushing to have the death penalty back within his term which would end in 2022.

The President had been accused of crimes against humanity at the International Criminal Court over the thousands of summary killings being linked to his bloody campaign against drugs.

Asked if the death penalty should also apply to Duterte for such a heinous crime which he had been accused of committing, Saguisag said he doubted if capital punishment would cover the President.

“He’d be close to 80. He may be sued for damages, though, following the Yamashita or Medina standard of command responsibility,” Saguisag said, referring to an Imperial Japanese Army general accused of war crimes during World War 2 and an American army captain indicted for one of the most atrocious crimes committed during the Vietnam War, the My Lai massacre.

“I would not want anyone sent to the Promised Land by the state in a case of judicial murder,” Saguisag said.