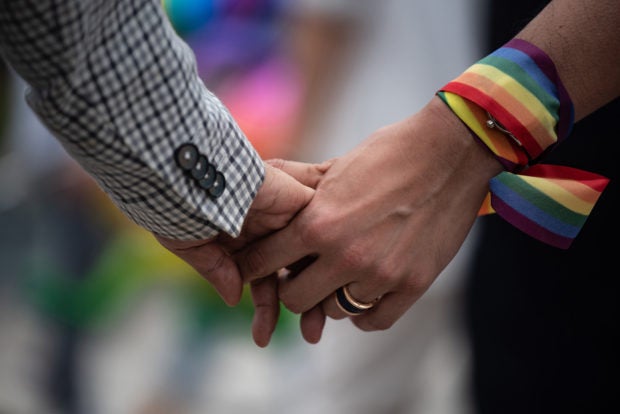 A same-sex couple hold hands during an event to raise awareness of gay rights in Hong Kong on May 25, 2019, one day after Taiwan made history with Asia’s first legal gay weddings. – The weddings, which came a week after lawmakers took the unprecedented decision to legalise gay marriage despite staunch conservative opposition, places Taiwan at the vanguard of the burgeoning gay rights movement in Asia. (Photo by Philip FONG / AFP)

Dela Rosa made known his stand on the issue during the hearing of the Senate committee on women on the anti-discrimination bill.

The hearing was attended by transgender woman Gretchen Diez, who was arrested for unjust vexation last week after she was barred from using the ladies’ room at a mall in Quezon City.

“I’d like to manifest na ako po, I’m on your side,” dela Rosa said, addressing members of the Lesbian, Gay, Bisexual, Transgender, Queer, Intersex, and Asexual (LGBTQIA+) community present in the hearing.

The senator has one concern though: Allowing transgender to use toilets designated for ‘biologically’ female.

While it was true there was no recorded case yet of a transgender harassing another woman inside a toilet, he still raised the possibility of it happening in the future.

“You can’t detach me from my wild imagination being a retired police officer,” said Dela Rosa, who headed the Philippine National Police.

“Are our sisters and daughter safe in those bathroom?” he asked.

Dela Rosa said he asked his own daughter, and she expressed apprehension sharing toilets with transgender people.

He quickly clarified though that his opinion should not be taken as an affront to the LGBT community.

Naomi Fontanos, president of the group called “GANDA Filipinas,” said she understands the concern of the senator but noted there are existing laws against sexual violence.

Besides, Fontanos reiterated that sexual violence can happen anywhere.

“They don’t necessarily have to be in the toilets alone. Sexual violence can happen in your own home and there are laws to prosecute that,” she added./ac