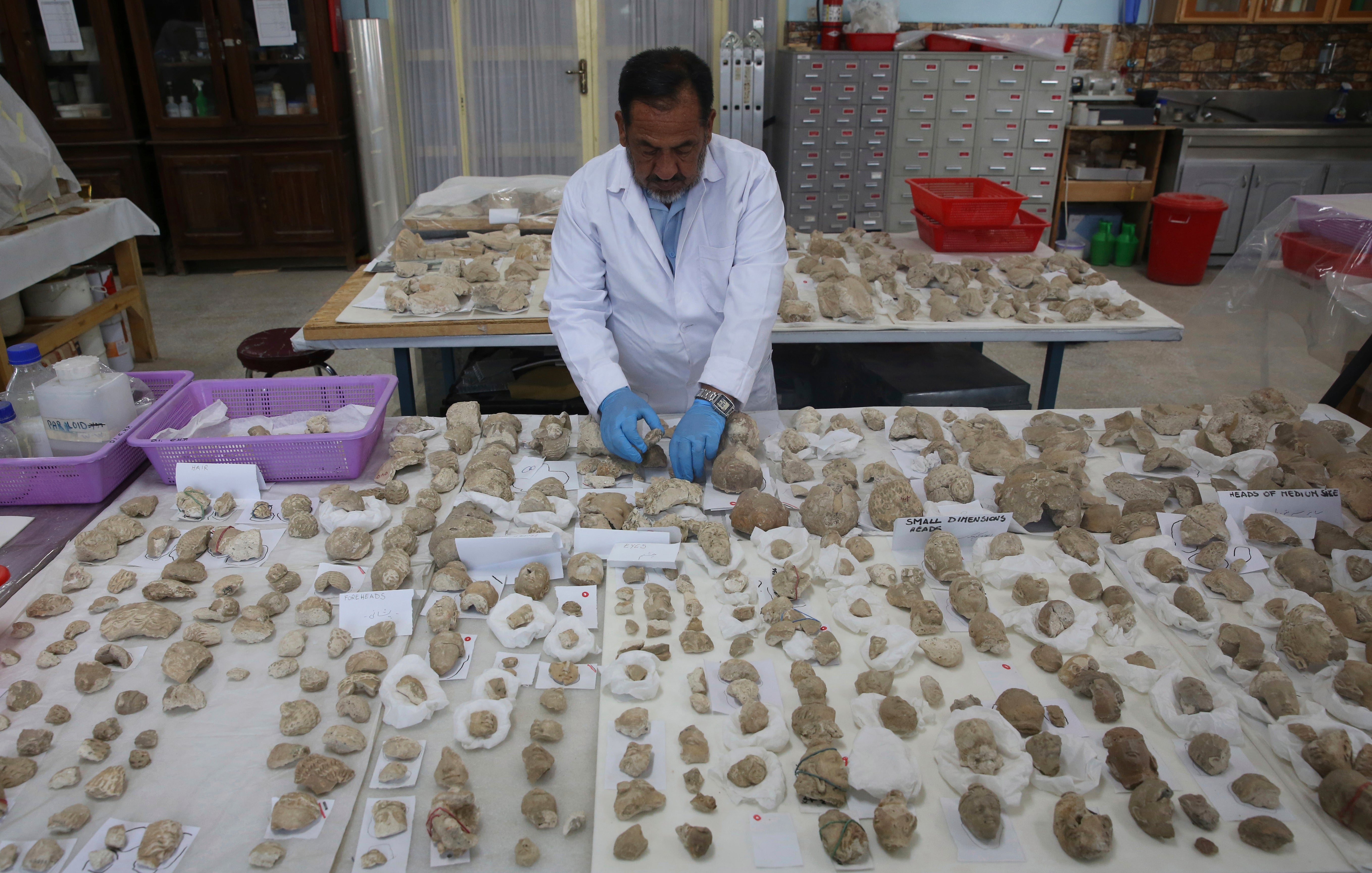 In this Saturday, Aug. 17, 2019 photo, conservator Sherazuddin Saifi works on pieces of a small statue damaged by the Taliban because they were judged to be against Islam, at the National Museum of Afghanistan, in Kabul, Afghanistan. Museum workers in Kabul have been trying to fit shattered antiquities together again as a nervous country waits for the Taliban and the U.S. to reach a deal on ending America’s longest war. (AP Photo/Rafiq Maqbool)

KABUL, Afghanistan — The Taliban fighters arrived with hammers and hatred. What they left behind is laid out on tables at the National Museum of Afghanistan, 18 years later: shattered pieces of ancient Buddha figurines, smashed because they were judged to be against Islam.

Museum workers in Kabul have been trying to fit them together again as a nervous country waits for the Taliban and the U.S. to reach a deal on ending America’s longest war. The agreement is expected to lead to intra-Afghan talks in which the extremist group would play a role in shaping Afghanistan’s future.

Few details have emerged from several rounds of U.S.-Taliban negotiations held over the past year, and no one knows what a Taliban return to the capital, Kabul, might look like. The country still sees near-daily attacks not only by the long-established Taliban, who now control about half of Afghanistan, but also from a brutal local affiliate of the Islamic State group.

The Taliban’s five-year rule imposed a harsh form of Islamic law, denying girls education, banning music and banishing women to their homes. It ended shortly after the U.S.-led invasion following the Sept. 11, 2001 terror attacks to rout the Taliban, who had harbored al-Qaida and its leader Osama bin Laden.

Sherazuddin Saifi remembers the day the Taliban arrived at the national museum in 2001, a period of cultural rampage in which the world’s largest standing Buddha statues in Bamyan province were dynamited, to global horror.

For several days, the Taliban set upon the Kabul museum’s trove of artifacts from Afghanistan’s

millennia-old history as a crossroads of cultures: Greek, Persian, Chinese and other. They selected offending items that showed human forms, even early Islamic ones, shattered them with hammers or smashed them against the floor.

“We could not prevent them. They were breaking all the locks, entering each room and smashing all items into pieces,” said Saifi, who is part of the restoration team. “It was heartbreaking and horrific … they destroyed their own history.”

More than 2,500 statues were shattered, parts of them ground into powder. Restoration work could take a decade, Saifi said, but “we really feel happy after we put these pieces together again” and revive their meaning.

Among the objects destroyed were the Hadda figurines, a notable collection of Buddhist sculptures discovered decades ago in eastern Afghanistan, near the present-day city of Jalalabad. Photographs that remain of the intact figurines, and the shards themselves, hint at delicate curls of hair or lip.

The Taliban smashed them into thousands of pieces, many the size of fists or even a coin. Now some of the shattered heads are held together with rubber bands in the workshop, part of a sprawling puzzle that can take days of patient effort to join a single piece to another.

The Hadda figurines are the museum’s most visible sign these days of the years-long recovery from the turmoil in Afghanistan that began even before the Taliban, when warlords fought over Kabul in the wake of a Soviet retreat.

Much of the museum’s holdings, thousands of pieces, were looted and the building was shelled, though some treasures were hidden in the presidential palace in Kabul and elsewhere. The roof of the room where the Hadda figurines are now being pieced together was destroyed.

The museum’s recovery began in earnest in 2004, during the period when the defeated Taliban quietly began to regroup. A few hundred objects have been restored in recent years. Now the museum and the University of Chicago’s Oriental Institute are compiling as complete an inventory as possible in the hope of tracking down missing artifacts — and saving a digital record of the collection in case of further threat.

That database is more than 99% complete, with more than 135,000 surviving pieces, the Oriental Institute says. For the missing artifacts it hopes to create digital “wanted” posters with their images to post online, “so that these objects can be spotted, and ideally recovered and repatriated.”

Experts and advocates of Afghanistan’s rich history have expressed dismay that cultural preservation apparently has not been on the agenda in the U.S.-Taliban negotiations, which have been focused on a U.S. troop withdrawal and Taliban guarantees that the country will not be used as a launching pad for global terror attacks.

“If it has been discussed, we are unaware of it, and this is something we have been following closely,” said Adam Tiffen, treasurer with the Virginia-based Alliance for the Restoration of Cultural Heritage. The U.S. envoy leading the talks with the Taliban, Zalmay Khalilzad, is the organization’s director emeritus.

“If we do not learn from our past we are a fool, I would say,” said museum director Mohammad Fahim Rahimi, who is very concerned about the potential Taliban return and is making plans to protect the museum’s holdings. “I hope they have learned that this is not against the (law) of Islam, nobody is worshipping these objects, everybody is considering these objects as showing our history.”

He urged the Taliban to go to museums in Doha, Qatar, where the group has a political office, and see the artifacts that are preserved there.

“We have achieved a lot in 18 years” since the Taliban were defeated, Rahimi said. “If they are here in power and there is no change in their mentality, it means we are definitely back where we started and whatever we achieved will be gone.”

Not all the Hadda artifacts were destroyed. A short walk down the hushed corridor from the workshop that reflects so much Taliban carnage, a complete figure of a seated Buddha is on display, dating from the third or fourth century.