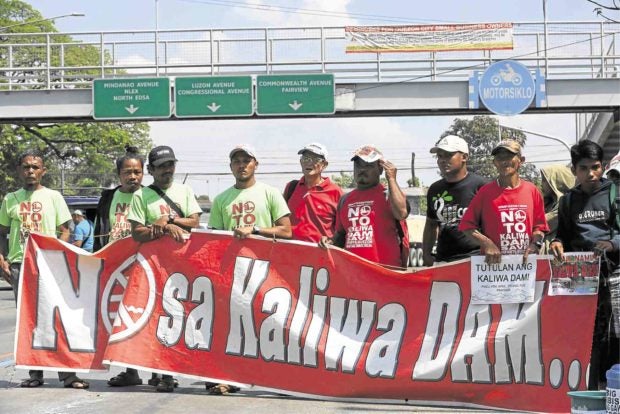 DAMNING KALIWA DAM Members of the Dumagat-Remontado tribe from Quezon and Rizal provinces hold a rally in front of the office of the Metropolitan Waterworks and Sewerage System in Quezon City in March this year to protest plans to build the Kaliwa Dam. —NIñO JESUS ORBETA

MANILA, Philippines — Malacañang on Monday said it would look into the report of the Commission on Audit (COA) that questioned the award of the Kaliwa Dam contract to a Chinese firm.

In a report released Sunday, COA said the bidding for the Kaliwa Dam, which would be funded through an Official Development Assistance loan, was done “in the guise of being a competitive procurement process,” citing that the non-compliance to qualification requirements of two in three Chinese contractors seemed to be intentional.

Despite the Technical Working Group (TWG) saying that the Consortium of Guangdong Foreign Construction had “proven track record and work experience,” it was found to be non-compliant with eligibility requirements during the opening of bids.

The financial bid of Power Construction Corporation of China Limited, meanwhile, was “surprisingly higher” than the approved budget for the contract.

“It can be deduced that the two bidders/contractors were included merely to comply with the at least three bidders requirement as stated under the Procurement Law,” the COA report said.

Sought for comment, presidential spokesperson Salvador Panelo said: “Of course, we will have to look at the report of COA then look at the contract.”

He said Malacañang has so far “not received officially a report on that matter.”

Asked if the government will suspend the contract if found to be marred with irregularities, Panelo, who is also chief legal counsel of the Chief Executive, noted: “We’ll let the President decide on that.” /kga