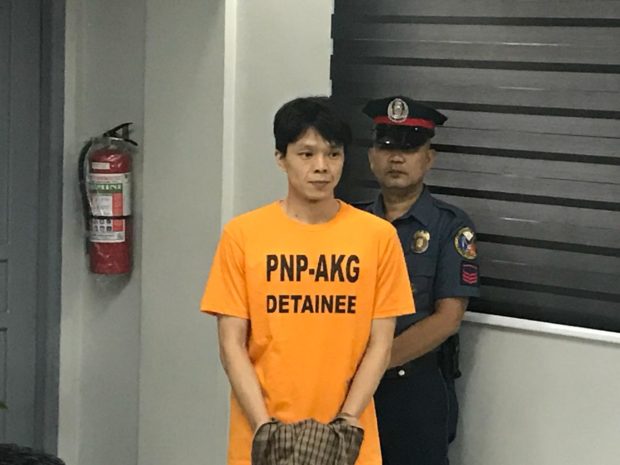 A police officer accompanies Chinese national Libu Xu at the PNP-Anti-Kidnapping Group office on Monday, August 19, 2019. The suspect was arrested for being one of the alleged abductors of a fellow Chinese in a hotel and casino in Pasay City on July 29. (Photo by Cathrine Gonzales / INQUIRER.net)

MANILA, Philippines — Police have arrested a Chinese suspect in the alleged kidnapping of a compatriot who had failed to pay back his casino gambling bet.

In a press briefing at Camp Crame in Quezon City on Monday, Cereno said the victim borrowed P1.5 million from a Chinese casino financier named alias Ah Hua and lost at a baccarat, a gambling card game, in a hotel and casino in Pasay City.

The police official said that since the victim did not have cash to pay his debt and its interest worth P500,000, Ah Hua allegedly had his men, who were all Chinese nationals, abduct the victim and hold him captive in the same hotel and casino in Pasay City, where the victim stayed from July 29 to 31.

Cereno said that on August 1, alias Ah Hua instructed two of his men guarding Bian to transfer the victim to a safehouse in Alabang, Muntinlupa City. While they were in the safehouse, the suspects allegedly demanded Rmb300,000 or over P2.2 million from the victim’s father for his release.

At about 10:30 p.m. on August 11, alias Ah Hua then instructed at least six of his men to bring the victim to the Pasay City Police Station. Cereno said five of these men approached a duty investigator and told him they will file a complaint against the victim for not paying his debt.

But the investigator was busy at the time so the police temporarily detained the victim inside the lock-up jail of the station. Cereno said that without the knowledge of the police officers, the suspects took a video of the victim who was inside the detention cell. The victim was later released after a few minutes since the investigator found no basis for detaining him in relation to the complaint of the suspects.

On the same day, the suspects brought the victim back to the hotel in Pasay City where he stayed until August 15. This is when the suspects sent the video taken at the police station to the victim’s father, who later showed it to AKG officers.

Police said that at about 11:30 p.m., a certain Huan Jin Pai turned over the victim to the Pasay City Police Station. As of posting time, police have yet to confirm to reporters how Huan Jin Pai knew of the ordeal of the victim.

Cereno said the AKG had obtained another video showing Bian being tortured by the suspects while his hands were tied inside the safehouse in Alabang.

After seeing the video shown by the victim’s father, AKG operatives then went to the Pasay City Police Station and confirmed that the material was indeed taken inside the lock-up cell.

AKG operatives backed by officers of the Pasay City Police then launched an operation at a condominium in Pasay City on August 15, which led to the arrest of Libu Xu.

The victim also positively identified the arrested suspect as one of his alleged abductors.

Cereno said a case of kidnapping for ransom with serious illegal detention was filed against Libu Xu on August 16, while preliminary investigation was recommended for at-large suspects Ah Hua and four John Does.

The arrested suspect is now under the custody of the PNP-AKG in Camp Crame.

Cereno said the AKG will look into the possible liability of the investigator who supposedly let the victim be detained, but asserted that the investigator did not intend to detain the wrong person. He said the police officers on duty were also not aware that the suspects took a video of the victim who was in detention. /je