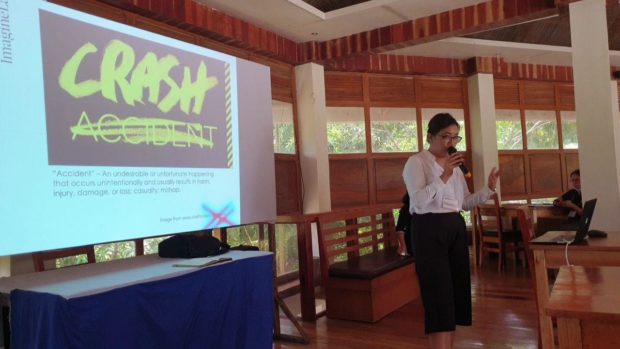 Lawyer Natasha Daphne Marcelo of ImagineLaw speaks about road crashes in the country in a workshop for journalists held in Casiguran, Sorsogon. DALE ISRAEL

CEBU CITY—Road crashes in the Philippines not only kill dozens of people but also cost at least P105.7 billion every year, according to a road safety nongovernment organization.

Lawyer Natasha Daphne Marcelo, of ImagineLaw, said the figure was from the group’s estimate of P5.7 billion spent on medical treatment and P100 billion in opportunity losses arising from road accidents.

The data were presented at a workshop for journalists in Sorsogon at the weekend.

The group computed the costs of fatal road crashes in 2017 alone which led to 11,360 deaths.

According to the group, in the Philippines at least one person dies every hour which would translate to 11,360 people dead in 2017 alone, which was higher than recorded fatalities as a result of dengue in the same year.

In Bicol region alone, where the workshop was held, a conservative estimate of P2.5 billion was lost due to deaths from road crashes.

Aside from that, Marcelo said P506,000 is added as social cost of pain, grief, and suffering. An additional P76,000 is also spent on vehicle repairs.

Marcelo said the amount could have been used to purchase road safety equipment and fix dilapidated road signs, among other safety measures.

ImagineLaw and the Peace and Conflict Journalism Network gathered journalists from Bicol region, Visayas, and Mindanao last Friday and Saturday in Casiguran, Sorsogon province for a reporting workshop on road safety.

Both groups are pushing for the setting of speed limits, which they believe would reduce, if not eliminate, road crashes. They said road crashes should not be referred to as “accidents” because these are never accidental and are preventable.

In 2018, the road safety advocate partnered with the Land Transportation Office and the Department of Transportation to pursue the setting of speed limits. The group also led the campaign “#SlowDownToSaveLives” for the Philippines.

In the global setting, the group cited World Health Organization data which estimated 1.35 million deaths from road crashes or about one person dying every 24 seconds.

ImagineLaw also said the leading causes of road crash deaths in the Philippines are overspeeding; drunk driving or driver impairment; and the non use of restraints, seatbelts and helmets.

Those that are involved in road crashes were mostly males which are often 15 to 29 years old./TSB