WASHINGTON – President Donald Trump said Sunday the idea of buying Greenland from Denmark has been discussed within his administration because of the strategic benefits for the U.S. and suggested that the semi-autonomous territory is a financial burden to Denmark. 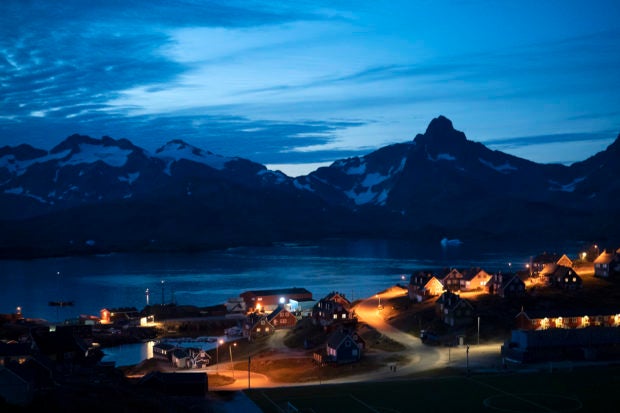 In this photo taken late Friday, Aug. 16, 2019, homes are illuminated after the sunset in Tasiilaq, Greenland. (AP Photo/Felipe Dana)

Surprise and confusion greeted a Wall Street Journal report last Thursday that Trump has been raising the subject of buying Greenland in recent weeks. Officials in Greenland have said it’s not for sale and Trump allowed Sunday that it’s not a priority of his administration.

“It’s just something we’ve talked about,” Trump told reporters when asked about the idea. “Denmark essentially owns it. We’re very good allies with Denmark. We’ve protected Denmark like we protect large portions of the world, so the concept came up.”

The U.S. military has operated for decades from Thule Air Base in Greenland, which is situated between the Atlantic and Arctic oceans. The northern-most U.S. base is part of the military’s global network of radars and other sensors to provide ballistic missile warning and space surveillance.

“Strategically it’s interesting and we’d be interested, but we’ll talk to them a little bit. It’s not No. 1 on the burner, I can tell you that,” the president said.

Trump, who made a fortune in the New York real estate market and owns or licenses properties around the world, appeared to cast the idea from the perspective of a developer.

“Essentially, it’s a large real estate deal. A lot of things can be done. It’s hurting Denmark very badly, because they’re losing almost $700 million a year carrying it. So they carry it at a great loss,” he said.

Trump is expected to visit Denmark in September as part of a trip to Europe. /gsg