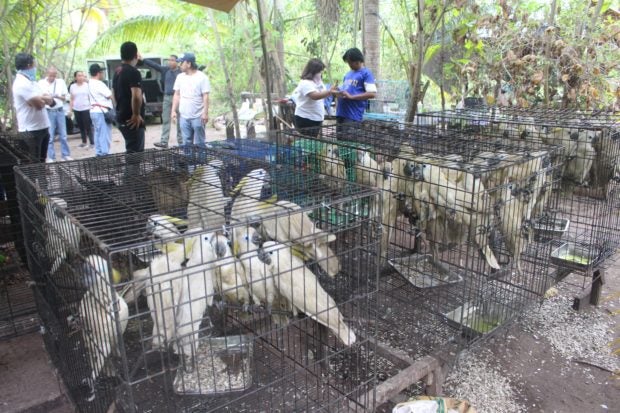 CRAMMED INCRATES AND CAGES Endangered birds of different species are among some 450 animals poached from the jungles of Indonesia and Papua New Guinea that were rescued by agents of the Department of Environment and Natural Resources and the National Bureau of Investigation after being smuggled into the Philippines through southern Mindanao. —PHOTOS COURTESY OF DENR-BIODIVERSITY MANAGEMENT BUREAU

MANILA, Philippines — When, early this year, the tip came that certain animals were to be smuggled into the country through southern Mindanao, Rogelio Demelletes Jr. was ready.

A wildlife law enforcer with the Department of Environment and Natural Resources (DENR), Demelletes immediately flew to Davao Oriental province, more than 1,500 kilometers south of Manila, to get the job done.

After all, this single piece of information was the fruit of painstaking monthslong surveillance and intelligence-gathering by tipsters and law enforcers.

And their effort was not wasted. In a forest at Barangay Dahican in Mati City, enforcers from the DENR and the National Bureau of Investigation arrested two men for illegal possession and sale of wildlife, after they sold a bird to an officer who had posed as a buyer.

The agents later discovered the targets of their operation crammed in crates and cages: some 450 animals, including different species of endangered birds, lizards and mammals that were poached from the jungles of Indonesia and Papua New Guinea.

The animals were worth P50 million in the local market, Demelletes said. In underground and black markets, that price could increase by as much as five times.

If the arrested men, who claimed to be mere caretakers, made even just a portion of the estimated price, it was still considerable profit worth the risk to their lives and freedom.

The Philippines, with its strategic location and rich flora and fauna, plays a complex role in the illegal trade in wildlife. Not only is it a source of endemic and endangered species, it is also increasingly becoming a destination for trafficked animals and their parts. The animals end up as pets, and their parts as food, ornaments or ingredients for traditional medicine.

Porous boundaries and largely understaffed enforcement units also make the Philippines an ideal transit point for wildlife stolen from neighboring Southeast Asian countries, or, as shown recently, from as far as Africa and Europe. The animals are shipped to other countries, including the United States, China and Japan, using the Philippines as a stopover. 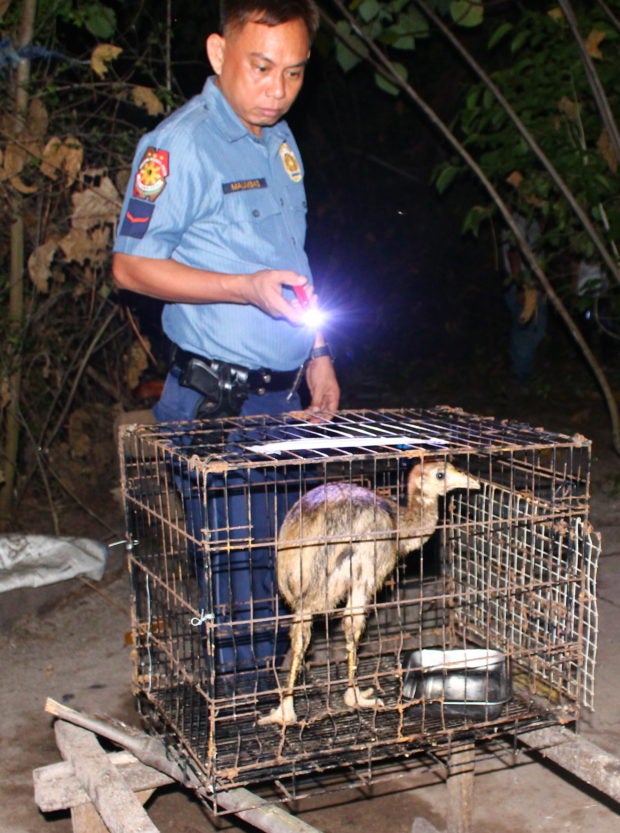 It’s a complicated picture, with the government playing catch-up to traffickers who are working faster and getting smarter.

“We are running against time,” said Demelletes, who works with the task force known as the Philippine Operations Group on Ivory and Illegal Wildlife Trade, or “Pogi.”

“We cannot police the entire country. We lack manpower, resources, vehicles, assets, funds … And we know we cannot do it alone,” he said.

Pogi’s challenges are heightened by the crippling poverty that pushes communities to poaching for easy profit. It’s a reality that pits the need for survival against the fate of animals and plants mistaken by many to be in infinite numbers in the wild.

Wildlife crime is considered the fourth most lucrative illegal business on the planet, after narcotics, human trafficking and firearms, according to the World Bank’s Global Wildlife Program.

In the Philippines, the trade is no small venture.

“We are losing $1 billion—or P50 billion—every year due to the illegal wildlife trade,” said Theresa Mundita Lim, executive director of the Asean Centre for Biodiversity. As head of the DENR’s Biodiversity Management Bureau (BMB) for nearly 15 years, Lim witnessed her fair share of confiscations and operations against wildlife traffickers.

Data from the DENR-BMB show that from 2013 to 2018, the value of confiscated wildlife reached P184.9 million—a figure based on the selling price in the market.

But this amount is largely conservative compared to the actual value of what the country is losing, particularly in terms of biodiversity, Lim said.

“These [amounts] often do not include the values of ecosystem services that these animals provide, especially if they become extinct,” she said.

The Philippines is a biodiversity hot spot and is considered as a center of endemism, with a wide variety of wildlife found only here and nowhere else in the world. For instance, as many as 47 percent of terrestrial animals here are considered endemic, according to a 2016 assessment of the Biodiversity Conservation Society of the Philippines using data from the DENR and FishBase.

With nearly 110 million Filipinos depending on different ecosystems for food, shelter and livelihood, the collapse of even a single species can easily create a domino effect.

In 2011, for instance, it was reported that a surprisingly high demand for tokay gecko, locally known as “tuko,” swept the country in the wake of false information that the reptile can cure asthma, tuberculosis and acquired immunodeficiency syndrome or AIDS.

The massive hunt for tuko, although not classified as endangered, immediately drove its population down, Lim said.

She noted that the tuko craze coincided with the rise in the recorded cases of dengue, an illness caused by a virus carried by mosquitoes—insects that are part of the gecko’s diet.

“Everything is interconnected,” Lim said. “If we don’t realize that now, it might be too late before we realize that some species have already been wiped out and human beings will soon follow suit.”

Widespread poaching in the past few years, as seen in official confiscation records, could soon push vulnerable species, including those endemic to the country, further into extinction, experts said.

Between 2013 and 2018, authorities confiscated over 26,700 different animals from wildlife traffickers. The volume could mean the decimation of certain species, including those that have not yet been thoroughly studied. Topping the list are reptiles such as turtles, snakes and lizards, at a whopping 17,175 in just five years.

While some seizures came only in pairs, large-scale collections by poachers and traffickers were also evident. 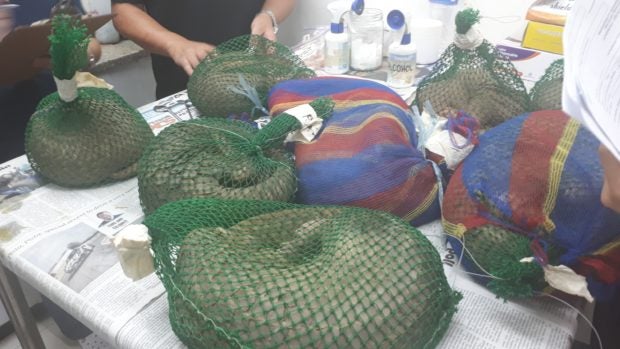 CURLED CAPTIVES The 10 Philippine pangolins intercepted from three smugglers in Tagaytay
City in June are curled up in fishnet bags when they were rescued by authorities.

In November 2013, authorities arrested two Malaysians on Mangsee Island in Balabac, Palawan province. They had with them more than 9,200 marine turtle eggs, two sacks of marine turtle meat, and three sacks of clam meat.

A year and a half later, a raid on a warehouse in Palawan yielded Philippine pond turtles that were to be shipped to China. Of the 4,402 turtles, classified as critically endangered, 322 were already dead.

“[Enforcers] need to move faster,” said wildlife lawyer Edward Lorenzo. “It’s scary because the rate of extraction versus the rate of apprehensions may not match anymore.”

Even with stiff regulations and stronger enforcement, poaching persists mainly due to the growing demand for the exotic and the rare. This demand, both in local and international markets, is fueled by desire, tradition, or misinformation, as seen in the tuko craze.

The more endangered the animal, the higher the price—and the bigger the demand from collectors and consumers.

Charismatic wildlife, such as birds and small reptiles, are often traded as pets. The Palawan hill mynah, which used to be sold openly in the streets, can fetch as much as P6,000 in the country.

Those poached from Indonesian forests and smuggled into the country, like sulphur-crested cockatoos, palm cockatoos and black-capped lories, command even steeper prices.

Exotic animals, like monitor lizards, are also a favorite among collectors and are sold for thousands of pesos each.

The high price tags for rare flora and fauna easily attract poachers and smugglers, many coming from poor communities where hunting methods have been passed down for generations.

“It’s easy to make a business out of the environment. You don’t need capital; you just need a hunter or a gatherer,” Demelletes said.

Smuggling live animals in large batches, while easier to pull off, have forced traders to be more crafty.

According to enforcers, some handovers are now being done offshore, in open waters. When traveling inland, smugglers blare loud music from their vans to muffle the squawks and cries of live animals stowed in brutal conditions. Many die in transit due to stress, starvation and dehydration.

Some animals are immediately slaughtered for their parts. Turtles and tortoises, for instance, are killed for their carapaces or shells that are used for ornaments. Their meat is considered a delicacy, especially in East Asia.

Traditional Chinese medicine has decimated populations of pangolins, considered the most trafficked mammal worldwide. Pangolin scales are believed to have healing properties, though this has not been scientifically proven.

In June, 10 Philippine pangolins taken from the forests of Palawan were rescued from three traffickers at a checkpoint in Tagaytay City. The carriers reportedly told authorities that they were going to sell the scaly mammals in Binondo, popularly known as Manila’s Chinatown. Despite the rescue, the stress and starvation from the smuggling attempt killed seven pangolins.

According to Emerson Sy of the Philippine Center for Terrestrial and Aquatic Research, the influx of Chinese and South Korean nationals into the country since 2010 has led to the increased demand for pangolins, which can be ordered as an “off the menu” dish in some restaurants for P40,000.

Experts said curbing supply and demand would require herculean efforts from both the government and the public.

“In some communities, even if they know there are stiff penalties, they will continue to illegally collect [the animals] because they don’t have an alternative livelihood,” she said. “So we need to address poverty, specifically in areas where we find the most species that are in demand.” 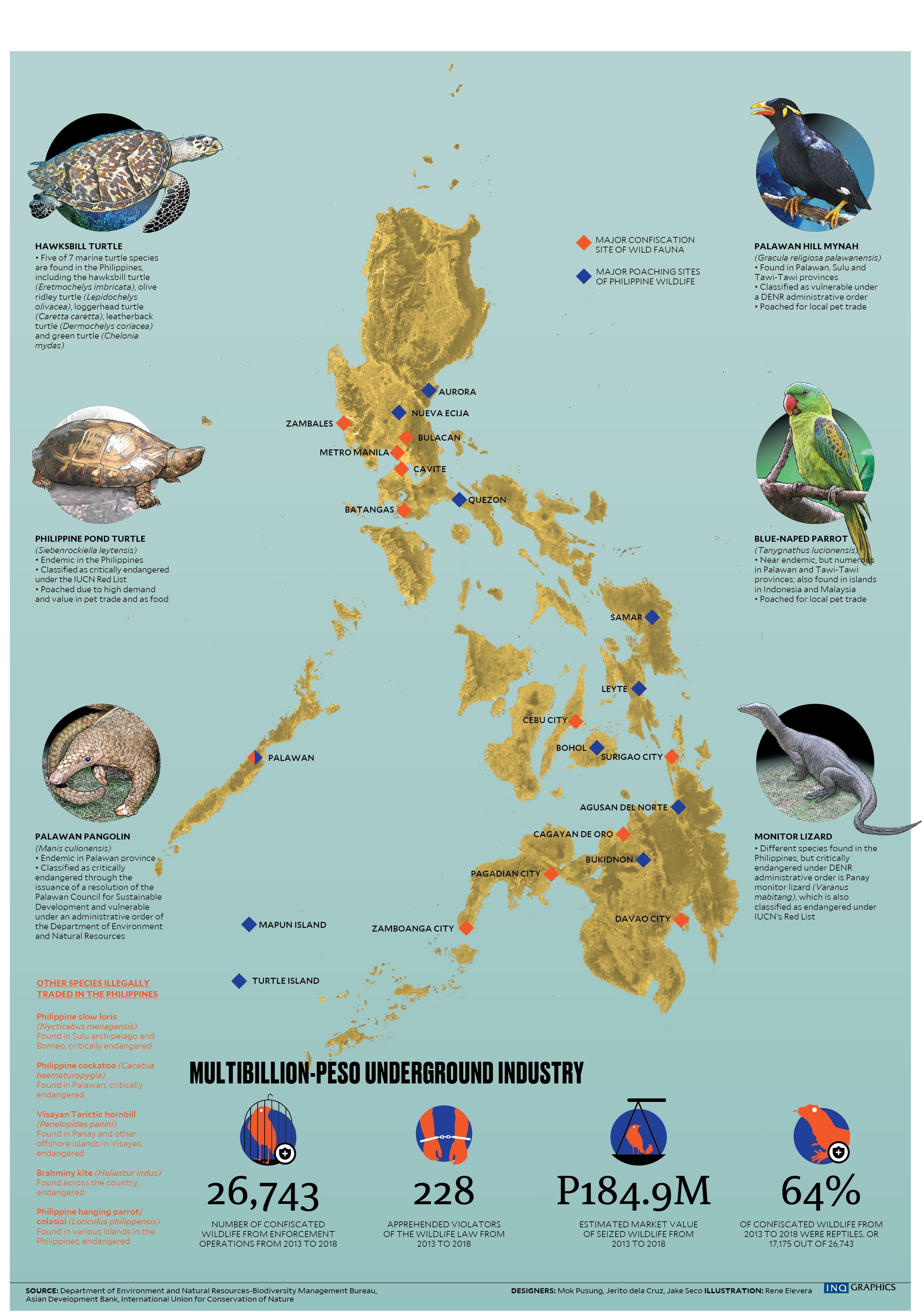