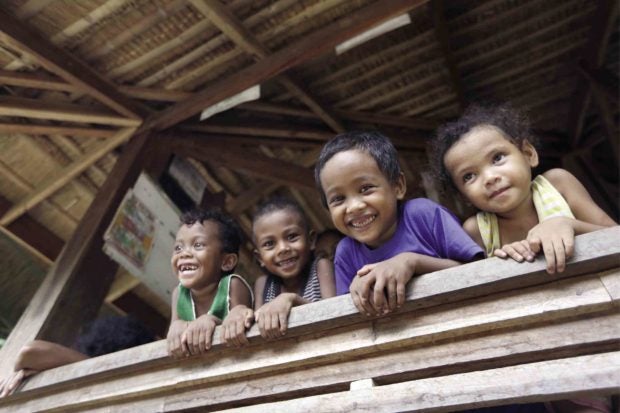 LOST LANGUAGE Little do these Aeta children in Botolan, Zambales, know that two of the languages of their tribe,Dicamay Agta and Villa Viciosa Agta, are already extinct. —INQUIRER FILE PHOTO

MANILA, Philippnes — The Itawis, who reside in Cagayan Valley, speak to one another in the Ilocano-influenced cadences of Itawit. But when it comes time to pray, the group shifts to Ibanag, the language of a neighboring tribe.

“Itawit as used for religious matters has disappeared,” said Nestor Castro, a cultural anthropologist and a professor of the University of the Philippines (UP) Department of Anthropology.

Castro noted that the death of a language is a slow, serial slaughter of its various parts, with religious terms often the first casualty.

The words that give flesh to a people’s arts and culture typically go next, followed by the vital speech that a group has used, sometimes for centuries, to catalog its environment. Conversational language, Castro said, is the final remnant.

According to the Summer Institute of Linguistics (SIL), the Philippines has 183 living languages—almost 96 percent of which are indigenous. The SIL lists 11 of these as “dying,” while 28 are “in trouble.”

But the actual number of threatened languages remains a mystery, as no detailed and systematic census has been administered to test the SIL’s research in these communities, said Jesus Federico Hernandez, a professor at the UP Department of Linguistics.

Such “vitality testing” is a costly undertaking that would require the government’s funding and priority, he added. That would be an essential first step toward determining which languages are most on the brink of irreversible collapse.

“There should be a government champion,” Castro said, adding that this could be the Komisyon sa Wikang Filipino. But as an agency with no local chapters, it needs to build a strong network of grassroots partners.

That agency could then identify “which languages are threatened, in what aspects they are threatened, and why this is happening,” Castro said. “If we’re able to map that out, for each possible threat, there should be a plan to address it.”

Saving the languages would require an interagency and intergenerational push of a scale much larger than can be observed in current initiatives, said Rynj Gonzales, a language assessment specialist at SIL Philippines.

“It could already be too late for some of these languages,” she said.

The Philippines has had a complicated history with its diverse array of languages. The adoption of Tagalog as the basis for Filipino in 1937, to the chagrin of non-Tagalog ethnic groups that comprise a majority of the population, opened up fault lines that still exist today.

Hernandez said he first encountered the study of endangered languages in 1993, when pioneering Filipino linguist Ernesto Constantino tried to highlight the issue. The government, however, in the name of fostering “national unity,” was uninterested.

Yet each native tongue holds an intrinsic value, he said. Anthropologists, wrote Gareth Cook for the Boston Globe in 2000, saw each language as “a soaring cathedral: a thing of beauty, the product of immense creative effort, filled with rich tapestries of knowledge.”

“Language is the soul of a culture,” Castro said.

It is also a massive repository of knowledge culled from generations of interaction between a people and their environment. The loss of these words, which could be clues to discussing everything from disease to food security, would deal a crippling blow to scientific discovery.

Languages in the Bicol region, for example, have a term for eruption that, unlike “pagsabog,” refers specifically to the explosion of a volcano— “tuga”—a result of their proximity to Mount Mayon.

This is essentially the way language is constructed, allowing it to be a network of experiences and beliefs that, together, provide humans with a lens for looking at the world.

“The loss of one language would be a loss to the overall body of knowledge,” Hernandez said. “These are centuries of information we have yet to decipher.”

Experts said any meaningful effort to revert the disappearance of a language must go beyond its documentation and confront the factors undermining this language—including government policies that may disenfranchise minority groups.

Urbanization, which can chase indigenous groups out of their ancestral lands or fundamentally alter the character of their surroundings, is one of the biggest accelerants of a language’s endangerment, Gonzales said.

Hernandez pointed out that militarization, infrastructure projects and the intrusion of mining and logging in indigenous lands also lead to the breakup of linguistic communities.

But the biggest stressor remains poverty—and the bleak economic prospects that have become prevalent after decades of governmental failure to develop the regions where these tribes live. Under such conditions, learning a more dominant language becomes a tool for survival.

“It changes into a vehicle for upward social mobility,” Hernandez said.

This is precisely why the various Negrito ethnolinguistic groups, historically the most economically and politically marginalized, also find their languages to be most endangered. The language of the Alabat Island Agta Negrito group, for example, only has 10 speakers left.

To categorize it, the SIL analyzes the generational displacement of each language. “Threatened” languages are those that have stopped being taught to children of a certain community. Worse still are “moribund” languages, or those only spoken by the grandparents in a group.

Gonzales said reversing the decline in many of these languages felt like a battle against gravity itself—with the amalgam of economic, political and social forces weighing down these languages’ fight for survival.

There are bright spots, she said, like the Mother Tongue-Based Multilingual Education being implemented by the Department of Education. Several local governments have also passed their own local language codes.

But the most successful efforts, she added, are those headed by the ethnolinguistic group itself, something the government should encourage.

“The community needs to have ownership over the revitalization efforts,” Gonzales said. “They need to be able to choose what happens to their language.”