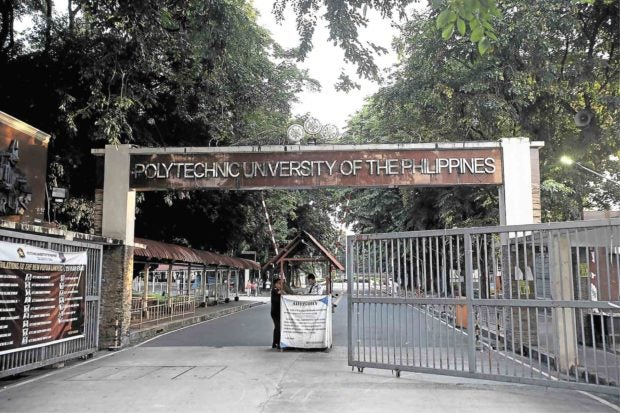 ‘SAFE SPACE’ The random drug tests, according to the PUP student regent, will create a culture of impunity and violence. —RICHARD A. REYES

MANILA, Philippines — Student leaders of the Polytechnic University of the Philippines (PUP) in Manila have objected to the conduct of random drug tests on campus, saying it would bring “Oplan Tokhang” — the government’s notorious antidrug campaign — inside the school grounds.

“[It will create] a culture of impunity and violence, which we abhor inside an institution of safe space and peace,” the Office of the Student Regent (OSR) said in a statement.

“It [is] also [a waste of] public funds that could have been used to build classrooms, laboratories and other facilities that the students genuinely need,” it added.

A total of 800 students from the 15 colleges of the PUP’s Sta. Mesa campus have been randomly selected for mandatory drug testing.

The tests began on Aug. 15 and are being conducted by Global Health Diagnostic Center Inc., a facility accredited by the Department of Health. The costs are being shouldered by PUP.

Other student councils also opposed the random drug testing as the PUP Student Handbook, where the guidelines for the conduct of the tests should have been specified, has yet to be approved.

Opposition heated up further after students spotted uniformed policemen on campus while the drug tests were ongoing, a violation of the Prudente-Ramos accord.

Arjay Caysip, one of the PUP students selected for mandatory drug testing, said university officials failed to inform them properly.

“[The PUP management] only posted an announcement, but there was no orientation, no waiver and consent [form] sent to [the] parents of minors,” he posted on Facebook.

Those selected cannot refuse to be tested as they might end up being suspended.

Caysip narrated how they were mocked by one of the PUP personnel at the testing site.

The PUP administration, however, insisted that the campaign was in accordance with the Commission on Higher Education (CHEd) Memorandum Order No. 18, series of 2018.

According to CHEd, the drug tests aim to “promote a drug-free campus and further [the] legitimate interest of the government in preventing and deterring dangerous drug use among the youth.”