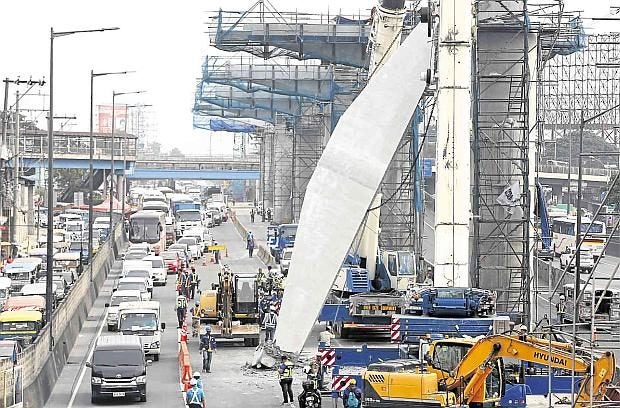 A 58-ton coping beam falls in the southbound area of the North Luzon Expressway, affecting traffic in the Balintawak and Camachile areas. (Photo by NIÑO JESUS ORBETA / Philippine Daily Inquirer)

Commuters headed for Metro Manila on Sunday morning found their journey disrupted when a heavy coping beam for the Skyway Stage 3 project fell at the southbound area of the Northern Luzon Expressway (NLEX), snarling traffic for hours.

The accident, which happened around 2 a.m. on the Balintawak southbound exit, led to the closure of two lanes for nearly 10 hours.

NLEX Corp., which manages road traffic in the area, said the 58-ton coping beam was being installed by a crane when it got detached from the hooks.

As of 10:11 AM, traffic build up from Valenzuela to Balintawak SB due to incident at Skyway construction area. All vehicles were diverted to Mindanao exit. Drive safely! pic.twitter.com/5GRFDWNUjq

The installation was part of the ongoing construction of the multibillion-peso Skyway Stage 3 project by San Miguel Corp.-led Citra Central Expressway Corp. and its contractor EEI Corp.

No one was hurt in the incident, but traffic flow was affected in the Balintawak and Camachile areas. NLEX Corp. said that it managed to clear the area by 11:50 a.m., making two lanes passable for motorists. Three lanes became passable around 12:33 p.m.

One of the biggest projects under the Duterte administration’s “Build, Build, Build” program, the Skyway Stage 3 Elevated Expressway Project encompasses some 18.68 kilometers and costs over P37 billion.

Once finished, it is expected to cut travel time from Balintawak to Buendia from two hours to just 20 minutes.