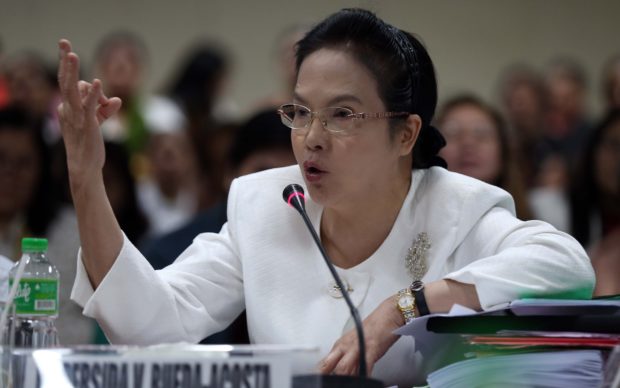 MANILA, Philippines — Public Attorney’s Office (PAO) chief Persida Rueda-Acosta has denied allegations of corruption, saying that the claims were “unfounded, malicious, baseless, fabricated, and concocted to malign” her and her office.

Acosta said this in the consolidated counter-affidavit she made with PAO forensics head Dr. Erwin Erfe following the complaint filed by Wilfredo Garrido Jr., who accused them of using the Dengvaxia issue to justify an increase in expenditures for office supplies.

The PAO chief said the “bare, unfounded, baseless, malicious and shotgun allegations” presented in the complaint were not supported by facts and evidence.

Acosta insisted that “no public funds were misappropriated nor used other than for what they were intended for by law.”

The Office of the Ombudsman on Friday said it had started a preliminary investigation into the corruption allegations against Acosta and Erfe.

“The corruption allegations against the high-ranking PAO officials will be judiciously scrutinized and the cases shall be resolved solely on the basis of the evidence presented by the parties,” Ombudsman Samuel Martires said in a statement.

Meanwhile, Acosta also defended her involvement in the Dengvaxia cases, particularly on the seemingly “scare” that it brought to the public.

The PAO chief said her office’s assistance to the Dengvaxia vaccine recipients, as well as their families, were in response to the requests of the Volunteers Against Crime and Corruption (VACC) and the Samahan ng Mga Magulang, Anak ay Biktima ng Dengvaxia (SMABD) and the order of the Department of Justice (DOJ).

“It is disheartening to know that the actuations of the herein respondent Chief Public Attorney, are maliciously taken out of context. Her desire to serve the poor and give justice to the oppressed has always been her advocacy since she joined public service, considering her humble beginnings,” Acosta said.

“It was never the intention of the undersigned to dramatize each case that the PAO handles. The undersigned is but just human being with empathy, and moved by present incidents of too much torture and untimely deaths of the victims of injustice,” she added.

Acosta explained that her previous pronouncements on Dengvaxia were based “solely on documents, evidence, and not intended to scare the public.”

“With all due respect, the undersigned never spread hysteria with unfounded claims. The reason why the findings of the forensic examinations are made known to the public is done in the spirit of transparency and openness,” Acosta said.

The vaccine scare, Acosta said, was “brought about by the public distrust on vaccines,” adding that the issue was only with Dengvaxia and not all vaccines.

Acosta then called for the charges filed against her and Erfe to be dismissed for lack of evidence to support the allegations.

“All of the foregoing premises considered, the charges for Violation of Republic Act No. 3019; Falsification of Public Documents; Malversation of Public Funds; Illegal Use of Public Funds or Property as well as the administrative cases for Grave Misconduct; Serious Dishonesty; Grave Abuse of Authority; and Conduct Prejudicial to the Best Interest of Public Service be must therefore FAIL and DISMISSED for utter lack of factual basis, lack of probable cause, for insufficiency of evidence to support the allegations and for utter lack of merit,” Acosta said.

Dengvaxia was used in the mass anti-dengue vaccination program during the time of former President Benigno Aquino III in 2016 and was continued until 2017.

French pharmaceutical giant Sanofi Pasteur, the manufacturer of Dengvaxia, however, released a study in late 2017 stating that the product could cause an increased risk to patients who have not been infected by dengue in the past.

This led to Health Secretary Francisco Duque III pulling out Dengvaxia vaccines from the local market.