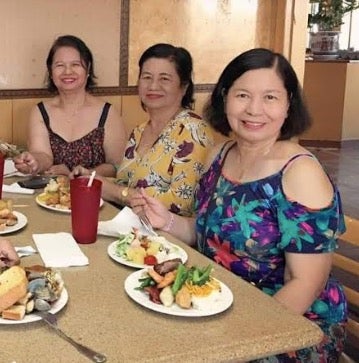 From left to right: Erlinda Varela Guce, Pacita Varela De Guzman, and Josefina Varela Baysic have been missing for a week after their flight from the United States landed in China for their connecting flight to Manila last August 10. Their families still have no information on their whereabouts. Photo from: John Florencio Gace.

MANILA, Philippines — Three senior citizens who were on their way home to the Philippines from the United States are reportedly missing after making a stopover in China.

Their connecting flight from China to the Ninoy Aquino International Airport was scheduled to depart on the same day and arrive in Manila at 11:10 p.m.

In an interview with INQUIRER.net, John Florencio said that his cousin, Marlon David, received a call from an unknown number who introduced herself as Erlinda and informed him that their flight was cancelled and that they were stranded in China due to a typhoon.

During the call, Erlinda said that their connecting flight was rescheduled and that the airline company would shoulder their meal and accommodation expenses while waiting for their rescheduled flight.

John Florencio then said that Marlon tried to call the number Erlinda used to contact them on the morning of August 11, but the owner of the number said that he no longer knows the whereabouts of their relatives.

Further, the owner of the number said that he is already scheduled to fly back to the Philippines on August 12 under the same flight number.

Search for the relatives

In an effort to locate their missing relatives, the family contacted the airline company’s local office in Makati.

Another relative also sought the help of the Philippine Consulate in Shanghai which assured them that the Immigration is already looking for the three senior citizens and that they will be advised once they have information on their relatives’ whereabouts.

No records of the passengers?

The said friend in China also called the airline company’s Eastern Shanghai office to seek information where he was informed that there were no records of the three senior citizens checking into a hotel.

Further, the airline company’s eastern Shanghai office said that the three were scheduled to board a plane from Wuhan to Pudong, but there were no records that the three senior citizens boarded the said flight.

Marlon said the family is set to visit the airline company’s local office on Monday before they lodge a formal concern before the Department of Foreign Affairs (DFA).

For John Florencio, the process of locating his mother has been a hard journey.

INQUIRER.net has reached out to the airline company’s local office as well as the Philippine Consulate in Beijing for updates on the case.

Read Next
Afghan officials: Suicide attack in wedding hall kills 63
EDITORS' PICK
Cherry Mobile teams up with Cloud Panda PH, launches online store
Bato de la Rosa, Risa Hontiveros back bill increasing female recruitment quota in PNP
Someone from the Philippines can become $356 Million richer this Tuesday
Quarantine violations still punishable despite deleted provisions in ‘Bayanihan 2’ – Bato dela Rosa
Mandaluyong fire put under control hours after it started
Leveling up your ‘lutong bahay’ with the kitchen companion you never knew you needed
MOST READ
Chaos as thousands return to work in Metro Manila
‘If I had not been SolGen, I will make you eat your words,’ Calida tells Coco Martin
Senate OKs bill authorizing president to postpone opening of classes beyond August
51 percent of German firms holding back investments in PH, but not because of COVID-19
Don't miss out on the latest news and information.